Doggie dementia risk rises each year after age 10, study finds -- here's what to look for 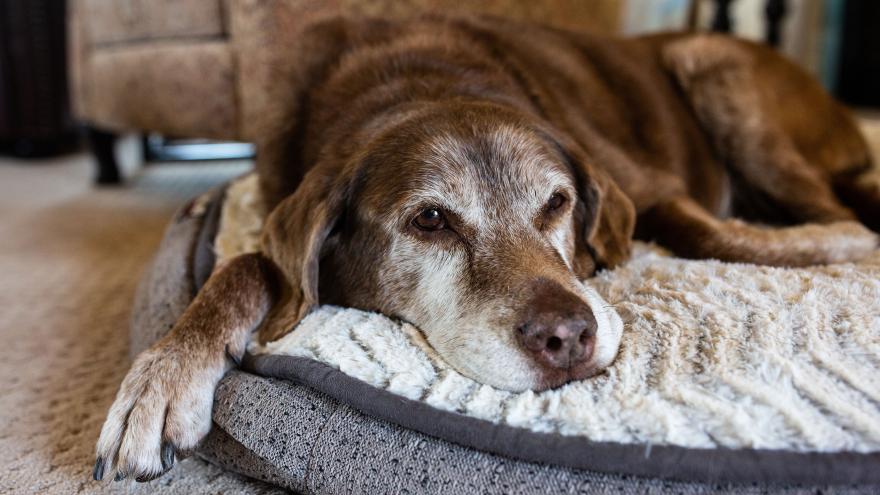 (CNN) -- Just like people, dogs can get dementia as they age. The spry speedster that used to zoom out the door may one day amble unsteadily to the closet to be let out.

It's an unfortunate reality many dog owners might have to face, especially if their dog's breed lives 10 years or more. A new study that is part of the Dog Aging Project found the risk of developing cognitive issues rises by 52% each year after age 10 in many dogs.

"Too often, pet owners think their dogs are just 'slowing down' and don't realize there are things they can do to ease, slow or even stave off cognitive decline as dogs age," Varble said.

"Studies show that mental activity and exercise are important for a dog's mental well-being just as it is in humans. Stimulating the brain is important and this can be done easily with food puzzles for example," she said.

Food puzzles are toys in which owners hide treats, and it's up to the dog to push, jiggle or jog the treats out of them. Such activities help keep both dogs' and cats' brains engaged, experts say.

In addition, "nutritional supplements have been shown to improve signs and slow the decline of CCD. There are also special foods for aging dogs," Varble said.

Age and activity levels are key

In the new study, published Thursday in the journal Scientific Reports, researchers asked over 15,000 dog owners to complete two surveys between December 2019 and 2020 on their dogs' health and cognitive status. Then the scientists grouped the dogs by age and analyzed the results

Based on age alone, a dog's odds of developing CCD increased by 68% for each year after a decade of life. But when other factors were taken into account, such as the breed of dog, existing health problems, sterilization and physical activity, the risk fell to 52% per extra year of life.

Inactive dogs of the same breed, health status, age and sterilization status were nearly seven times more likely to get doggie dementia than comparable active dogs. Whether it's the inactivity that leads to the dementia or vice versa is unclear, the study authors said.

In addition, dogs with a history of neurological, eye or ear disorders had a higher risk of cognitive decline, according tothe study.

There was good news as well: The study found almost no cognitive decline in dogs below the age of 10.

What to look for

Veterinarians have been studying the signs and symptoms of doggie dementia for years, trying to better understand and help the pets in their care. Here is what to look for, according to experts:

Disorientation: Dogs with cognitive issues can begin to have trouble getting around the house or start wandering around as if lost. They can get stuck behind furniture and not know how to get out or stare without a purpose at the floor, walls or out into space. They may even fail to recognize family members.

Changes in sleep cycles: Dementia can cause dogs toconfuse day and night, and your petcould wake during the night and begin pacing the house, barking or whining. The sleeplessness at night may lead to excessive sleeping during the day.

House training: Some dogs forget years of house training and begin relieving themselves inside, which can make them anxious. They may forget to alert you when they need to go out, or even forget to do their business while outside and soil the home when they return.

Changes in social behavior: Interactions with you and other people in their lives can change. A dog could become extra clingy, fearful or needy. Or the dog might become antisocial, withdrawing from interactions and spending time alone.

Changes in physical activity: A dog with cognitive decline may lose interest infavorite toys, other dogs and people or start pacing aimlessly with no ability to settle down.

Take your dog to the vet if you see any of these signs, and the sooner the better, Varble suggested. "Early intervention can extend and improve the quality of life for our pets," she said.

First, the vet will check the dog for other causes of the symptoms, eliminating such things as diabetes, loss of vision and hearing, kidney or urinary issues, arthritis, hypertension, and Cushing's disease, caused by an excess of the stress hormone cortisol.

If you and your vet catch the signs of dementia early, the doctor may suggest a behavior-altering drug approved for dogs by the US Food and Drug Administration which works on the neurotransmitter dopamine to help the decline.

The vet may also put your dog on a brain-healthy diet and encourage more physical activity, socialization and brain-stimulation via food puzzles, teaching new tricks and encouraging snuffles and sniffs on walks.