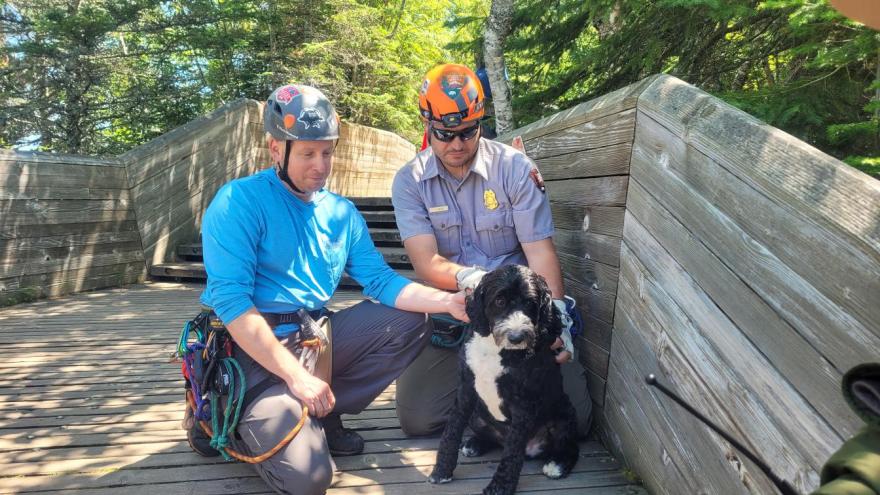 The 4-year-old cocker spaniel-poodle mix named Leo visiting the Miners Castle landmark with his Wisconsin family was found by rescuers on Friday, moving and limping around.

(CNN) -- A dog visiting the Pictured Rocks National Lakeshore in Michigan was rescued by park rangers after jumping over a railing and falling up to 30 feet down a cliff, according to the National Park Service.

The 4-year-old cocker spaniel-poodle mix named Leo visiting the Miners Castle landmark with his Wisconsin family was found on a ledge, moving and limping around on Friday, according to a Saturday news release. He was leashed but slipped out of his collar when he reached the end of the leash and fell straight down the cliff to a ledge 25 to 30 feet below, the release said.

Park rangers in the area arrived at the scene after hearing a child scream and ran to the lower platform to investigate, park officials said.

"Family members reassured Leo to stay put as additional park staff were called in, along with a volunteer from the Superior High Angle Rescue Professionals (SHARP) team, to rescue the dog from this steep complicated section of Lake Superior shoreline," the release said.

A member of the SHARP team from the city of Munising, named John Miller, was lowered down to the ledge where he encountered Leo barking and wagging his tail, but the dog wouldn't approach Miller. However, after about 25 minutes of coaxing Leo, offering him dog food, bread and Goldfish crackers, he finally came to rescuers Miller and Chief Ranger Joe Hughes, the release said.

Miller created a makeshift harness from webbing that fit Leo and was able to get him back on to the "lower overlook platform" where he reunited with his family, officials said.

"The parks shoreline can be very unforgiving from the cold water to the sheer cliffs and drop offs," Chief Ranger Joe Hughes said. "By partnering with the highly trained mountaineering guides on SHARP, we are able to safely effect these types of high angle rescues here at the park."

Officials said adventurous dogs are very common at the park, which surrounds the shore of Lake Superior in Alger County, located in Michigan's Upper Peninsula.