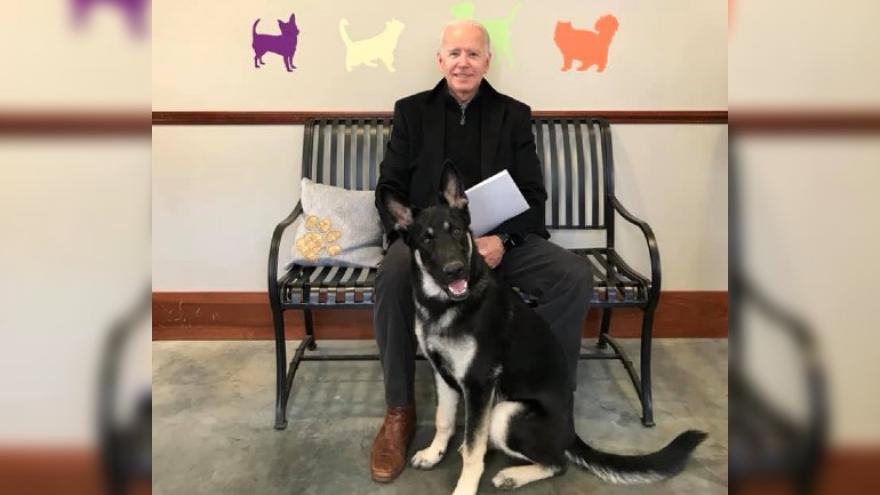 The business of transferring power between President Donald Trump and President-elect Joe Biden seemed on hold on Nov. 9.

(CNN) -- President-elect Joe Biden is poised to restore a time-honored tradition back to the White House this January: first pups.

President Donald Trump ran and won on breaking with Washington norms in 2016, which included opting against a pet during his four years in office. But Champ and Major Biden, both German Shepherds, will join the elite ranks of Socks Clinton, Barney Bush, Macaroni Kennedy and Rebecca Raccoon Coolidge, among others, this January when they move into 1600 Pennsylvania Avenue.

"With Barack inquiring about would I be willing to get vetted, Jill said, 'I'll make you a deal: if you get the vice presidency and get elected, you can get a dog,'" Biden told campaign reporters aboard his plane on Election Day 2008.

Major joined the Biden clan almost eight years later. The Bidens fostered Major from the Delaware Humane Association and made his adoption official in November 2018.

Major isn't the first rescue pet to land in the White House. Yuki, a mixed breed pup abandoned by his owner at a gas station in Texas, was rescued by President Lyndon B. Johnson's daughter Luci was the first, and Clinton's cat, Socks, was also a rescue.

Champ is mostly light brown with a dark snout, and Major is mostly black with light brown paws. News of the new first pets was welcomed on social media -- a Saturday post from the popular account "We Rate Dogs" rating both dogs 14 out of 10 received more than 355,000 likes on Instagram.

The tradition of keeping pets in the White House dates back to Thomas Jefferson, who kept a mockingbird and a couple of bear cubs during his presidency. Throughout the years, presidential pets became celebrities of sorts.

"It softens their image, it broadens their appeal," Ed Lengel, a former chief historian at the White House Historical Association, told CNN in 2017. "They help create an atmosphere of the White House as a family, a lived-in place and not just a stiff museum, but a place where a family lives and plays and enjoys each other's company."

The early history of White House pets was not well-documented, but included farm animals, hunting dogs and horses in stables on White House grounds, and many animals that were given as gifts.

President James Buchanan was reportedly given a herd of elephants, and President Martin Van Buren received a pair of tiger cubs. Congress made Van Buren give the cubs to a local zoo, according to Andrew Hager, historian in residence at the Presidential Pet Museum, a collection of presidential pet memorabilia located outside Baltimore.

Lengel told CNN that while it hasn't been documentarily confirmed, there is circumstantial evidence President John Quincy Adams was given an alligator.

"It's reputed that John Quincy Adams was given an alligator as a gift and he didn't quite know what to do with it," Lengel said. Adams was said to have kept the swamp creature in a tub in the East Room for a number of months.

President Woodrow Wilson kept a flock of sheep and a ram on the White House lawn, and President William Taft had a Holstein cow, Pauline Wayne, who later retired to Wisconsin, according to the DC History Center.

Though Presidents had kept pets for years, Warren Harding's dog, Laddie Boy, an Airedale terrier, had his own chair in the Roosevelt Room for Cabinet meetings and became the first "celebrity" pet in the early 1920s. Laddie Boy presided over the Easter Egg Roll, and once sat on a jury of children from a local nature club who put the White House owls on trial for murder. (The owls were found innocent.)

At the interest of intrepid White House journalists and their readers, the presidential pet became a high-profile beat. During the 1920s, Americans would send pet ambassadors to the White House.

President Calvin Coolidge's wife, Grace, became fond of one such ambassador, a raccoon she named "Rebecca," whom she walked on a bedazzled leash. She also adopted an opossum.

President Theodore Roosevelt had nearly 30 pets, including a bulldog named Pete who made headlines and nearly caused an international incident when he tore the pants off a French ambassador.

The Kennedy family White House was home to Macaroni the pony, multiple horses, the hamsters Debbie and Billy, dogs, parakeets, a canary, Zsa Zsa the rabbit and a cat.

George W. and Laura Bush's Scottish terrier, Barney, starred in a series of "Barney Cam" videos alongside fellow terrier, Miss Beazley. There was so much demand for Barney content that the White House created a website, "Barney.gov."

Trump was the first president in modern times to spend four years in the White House without procuring a pet, though the Pence family had a veritable menagerie over at the Naval Observatory, including a precocious rabbit, Marlon Bundo, with a book deal and social media presence.

Trump once lived with a poodle, Chappy, with his first wife, Ivana, who wrote in her memoir, "Raising Trump," that "Donald was not a dog fan."

Chappy, she later said, "had an equal dislike of Donald."