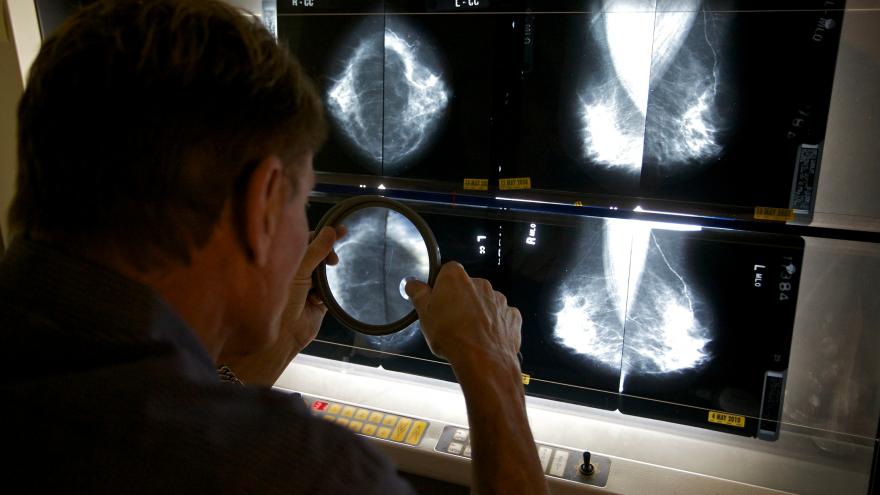 (CNN) -- Anne LaPorte, a registered nurse, was fatigued and had some back pain.

She just moved from Hawaii to California, and it was around the same time as the beginning of the pandemic -- in early 2020 -- when most people were feeling uneasy.

"I thought it was the stress of the move," said LaPorte, 55. But then by March of last year, the fatigue and pain heightened. She made a doctor's appointment for answers.

"My symptoms were getting worse. Covid was just hitting our hospital at that time so things were quite stressful. I had difficulty accessing just routine care at this time and our facility was -- as most facilities were -- completely unprepared for the Covid epidemic," LaPorte said.

"So, I saw probably three other primary care doctors and went to the ER three times before I was diagnosed with stage-four lung cancer," she said. "I would say it took -- March, April, May, June, July, August -- six months before I had a diagnosis."

LaPorte never smoked, stays active as a triathlon athlete and had been in good health.

"The day before I was diagnosed with stage-four lung cancer, I had cycled 50 miles," LaPorte said. "I was having difficulty running but I could still get on my bike. So you wouldn't look at me and really know that I was in advanced terminal lung cancer. My prognosis was three to six months when I was diagnosed."

She said that physicians found the cancer had spread throughout her spine, liver and left eye. Now retired from nursing, LaPorte has been in treatment for 13 months.

Due to the coronavirus pandemic, LaPorte's experience of having trouble accessing routine care has become commonplace.

Nationwide, there have been declines in cancer screenings as well as barriers to accessing treatment -- and physicians now worry that delays have led to patients arriving at their offices with advanced cancer.

'We're concerned that disparities are growing'

Dr. Randy Hicks, co-owner and CEO of Regional Medical Imaging in Michigan, has seen declines in cancer screening and treatments in the communities that his facilities serve. There are nine facilities across the Detroit and Flint, Michigan metropolitan areas.

"Michigan was severely impacted by the pandemic in 2020, and unfortunately all of my nine centers were impacted for a total of 9.5 weeks last year, which resulted in a significant backlog of patients who either delayed or skipped mammograms entirely last year," Hicks wrote in an email to CNN.

This year, his facilities have seen an uptick in advanced cancer cases.

"Now, as mammography rates are beginning to increase, many women are playing catch-up to get these vital health screenings done, which leads to another potential issue -- a drastic increase in workload for radiologists," Hicks wrote. "No doubt about it, we have unfortunately seen some advanced cases this year in the communities that we serve, likely due to women postponing screening."

Doctors also worry that these delays in screening and care can have larger impacts on communities of color, exacerbating troubling disparities in health care that have long existed before the pandemic.

"Underrepresented communities of color at a baseline may have limited access to health care at a baseline," Dr. Leonard Gomella, professor and chairman of urology at Thomas Jefferson University and Jefferson Health, wrote in an email to CNN. Therefore, any "negative impact like the pandemic is going to be most easily felt in these communities."

A study that published in this month's issue of the journal Preventive Medicine finds that in April 2020, the total number of breast and cervical cancer screening tests funded by the US Centers for Disease Control and Prevention's National Breast and Cervical Cancer Early Detection Program declined by 87% and 84%, respectively, compared with the previous five-year averages for that month.

The researchers noted that the greatest declines were seen among women of color. In April 2020, declines in breast cancer screening varied from 84% among Hispanic women to 98% among American Indian/Alaskan Native women. White, Black and Asian women saw declines of 87%, 90% and 97%, respectively.

Screening began to recover in May 2020. By June 2020, the volume of breast and cervical cancer screening tests was 39% and 40% below the five-year average for that month, respectively.

"We're concerned that disparities are growing, but we definitely still need time to understand the full impact of the pandemic since we're still living through it. It just takes time to get all the data, but I think what we can say is that the impact is two-fold," Dr. Laura Makaroff, the senior vice president for prevention and early detection at the American Cancer Society, told CNN on Tuesday.

"Number one, we definitely saw a steep decline in cancer screening at the beginning of the pandemic -- way back in Spring 2020, as health systems needed to adjust and not do elective procedures, including cancer screening, to attend to the acute needs of patients with Covid. Now, there's a backlog that created," Makaroff said.

"The second part of it is that, in addition to access to care in terms of where our health systems are and how cancer screening can be accomplished, is the impact of health insurance and employment," she said. "Communities and populations that face additional barriers to cancer screening, which includes health insurance and financial means to pay for screening, have also been impacted by unemployment and loss of employer-sponsored insurance due to the pandemic."

Makaroff said that she and her colleagues at the American Cancer Society are waiting for data to come in on the specific impacts that the pandemic has had on screening rates, accessing treatments and other aspects of cancer care -- but they have seen some early data so far. In August, they published a study in the journal Cancer that found breast cancer screening rates declined by 8% from July 2019 to 2020 among 32 community health centers in the United States.

A survey released last year by the American Society of Clinical Oncology found that two-thirds of Americans, nearly 64%, delayed or skipped scheduled cancer screenings -- such as mammogram, colonoscopy, skin check, or Pap/HPV test -- because of the coronavirus pandemic.

Overall, "while there are multiple prediction models published in peer-reviewed journals to estimate the effects of delayed or missed screenings, it will take time for real-world data to accumulate and clarify the true impact overall and on specific populations or geographic regions," a spokesperson at MD Anderson Cancer Center wrote in an email to CNN on Tuesday.

Gomella, of Jefferson Health, said that his facility saw a drop in prostate cancer screening during the height of the pandemic, but screening numbers were back to baseline by late 2020.

"Only time will tell if this temporary decline in screening efforts will impact long-term cancer control rates," he wrote to CNN.

'The inequity is appalling'

As a former nurse, LaPorte has seen inequities in health care first hand.

"The inequity is appalling in health care. Not just for cancer but for all diseases. As a nurse, I've worked in big city hospitals with high rates of lower-income patients and there are multiple reasons why there are disparities," LaPorte said.

"So, accessing care is a challenge in the best of times, and you throw on a global pandemic that this country was not ready for, you're seeing that resources are just being completely eaten up by the pandemic," she said. "Everyone is affected, but in lower-income places where we know that accessing health care alone is a challenge and taking that next step to getting screening tests -- it just doesn't happen."

There are some disturbing similarities in how both diseases -- Covid-19 and cancer -- disproportionately impact Black and Brown communities.

Data from the US Centers for Disease Control and Prevention shows that Black and Hispanic people are at least twice as likely to die of Covid-19 as non-Hispanic White people and nearly three times more likely to be hospitalized. Both Black and Hispanic people are more likely than White people to be infected with Covid-19, too. Similar disparities exist for some types of cancer too -- as well as their risk factors.

For instance, people of color are more than three times more likely to be breathing the most polluted air in the United States than White people, according to the American Lung Association. Air pollution can increase the risk of lung cancer.

Black men face a 9% higher incidence of cancer and 22% higher death rate compared with White men for all cancers combined, according to the American Cancer Society. In contrast, Black women have a 7% lower risk of a cancer diagnosis than White women, but a 13% higher risk of cancer death.

There are efforts across the United States, from California to New York, to promote early cancer screenings and minimize such racial disparities in health care.

The UC Davis Comprehensive Cancer Center in California announced last week plans to roll out a "mammovan," mobile van will provide free mammograms to women in underserved communities in Northern California and the Central Valley.

In New York, Assemblywoman Stacey Pheffer Amato has announced that she will be hosting a free mammogram screening event next month to promote early detection of breast cancer.

LaPorte is a champion for testing early. When she thinks about being diagnosed with cancer, she thinks of her father.

When he died in 2008, eight weeks after his lung cancer diagnosis, she scoured old X-ray images of his chest for any clue to help her understand.

She saw markings in the images that were oddly similar to markings in X-ray images taken of her own chest. When Anne showed this to her primary care doctor, she underwent another CT scan and it turned out she had a nodule in her lungs.

Since LaPorte was in good her health, she was told to watch the nodule and wait. Physicians hadn't looked at the nodule again until LaPorte experienced worsening symptoms last year.

LaPorte now spends her time raising awareness around the importance of screening early for lung cancer, working with the organizations "Be Bold Be Bald!" and the Lung Cancer Research Foundation.

"We're hoping to make some noise and make some changes for women in lung cancer -- all women, whether you smoke or not, we don't care," LaPorte said. "We're one community."