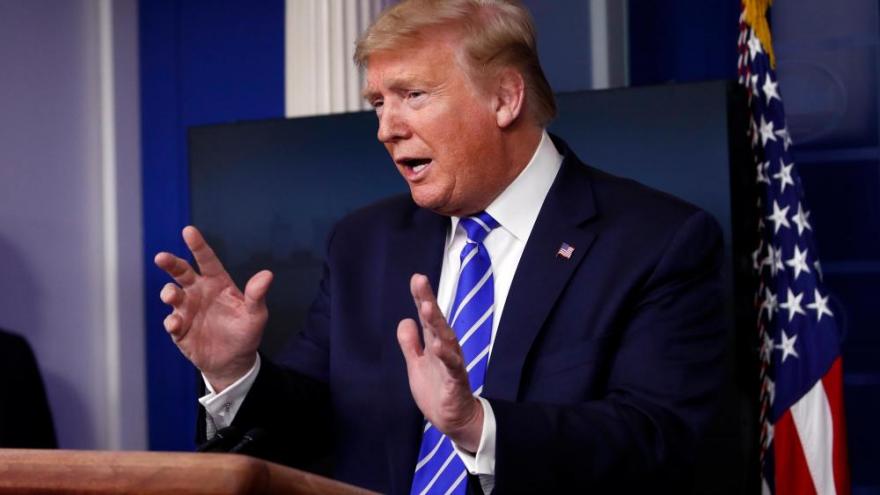 Doctors are rejecting the idea floated by President Donald Trump that research should be done into whether chemical disinfectants could be injected into human bodies as a potential coronavirus treatment.

(CNN) -- Doctors are rejecting the idea floated by President Donald Trump that research should be done into whether chemical disinfectants could be injected into human bodies as a potential coronavirus treatment.

There's "absolutely no merit" to the idea of injecting disinfectant, CNN Chief Medical Correspondent Dr. Sanjay Gupta said at a CNN coronavirus town hall shortly after Trump's suggestion on Thursday night. Such a treatment doesn't need to be tested, Gupta said, because it's already known that it would be harmful.

"The idea that we would do a trial of some sort, inject some people with disinfectant and some people not and see what happens ... I think everybody would know that that would be dangerous and counterproductive, and not at all moving us in the right direction," Gupta added.

The latest unproven and dangerous medical treatment peddled by Trump was made shortly after Bill Bryan -- a senior official at the US Department of Homeland Security who is not a scientist nor does he have a medical background -- said at a White House press briefing that studies on the virus showed bleach kills coronavirus in about five minutes, and isopropyl alcohol destroys it even faster.

Trump later remarked on the effectiveness of disinfectants and wondered whether they could be used to treat the virus in humans.

"Then I see the disinfectant, where it knocks it out in a minute. One minute. Is there a way we can do something like that, by injection inside or almost a cleaning?" the President said. "Because you see it gets on the lungs and does a tremendous number on the lungs."

Doctors, however, quickly dismissed the idea of researching the use of such harsh chemicals in the body -- rather than on surfaces -- to kill the virus.

"We don't want to inject disinfectants in our body. That's a bad idea," Dr. Colleen Kraft, an associate professor of infectious diseases at the Emory University School of Medicine, told CNN's Poppy Harlow Friday. "We don't want to use things in a way that is harmful to us."

Simply put, Kraft said: "It could definitely kill you."

But as for the potential of injecting disinfectants as a treatment?

"It will not help with the virus, but it will make you very, very sick and potentially kill you. Taking shots of disinfectant is never a good idea. ... Nobody should be doing that," he said.

Trump on Friday said his comments were "said sarcastically" and "of course" he's not encouraging Americans to inject themselves with disinfectant.

But Maryland's Emergency Management Agency issued an alert -- warning residents not to inject, ingest or administer any disinfectant product into the body -- after it received more than 100 calls to its hotline, said Mike Ricci, a spokesperson for Republican Maryland Gov. Larry Hogan, on Twitter.

The President's remarks even led the maker of Lysol and Dettol on Friday to urge customers not to consume its cleaning products.

"Under no circumstance should our disinfectant products be administered into the human body (through injection, ingestion or any other route)," the company, Reckitt Benckiser Group, said on its website.

Meanwhile, the US Food and Drug Administration has warned against fraudulent products being peddled on the internet that claim to be treatments for Covid-19. The agency has also warned against drinking "Miracle Mineral Solution" or other products with sodium chlorite, an active ingredient in disinfectants, that mixed with citric acid becomes bleach.

There are no FDA-approved treatments for Covid-19.

The President has often used the daily briefings to promote his recommendations for Americans over those based on science from the medical experts on his coronavirus task force. In previous briefings, Trump pushed the drug hydroxychloroquine as a treatment for coronavirus, despite a lack of evidence it's safe or effective against the virus and the drug's potentially deadly side effects.

Friday morning, the FDA offered clear guidance: hydroxychloroquine and chloroquine should only be used in hospital settings or clinical trials due to their potential for serious side effects.

The two drugs, the FDA said, "have not been shown to be safe and effective for treating or preventing Covid-19."