'Do not wait:' Court cases throw late-arriving votes into doubt 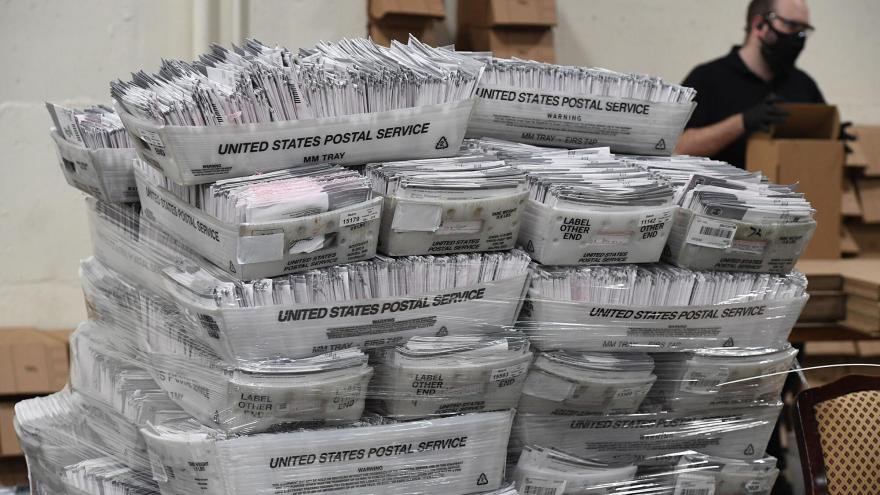 Voters in several key swing states are now rolling the dice if they mail in their ballots, with their votes potentially jeopardized if they don't arrive by Election Day.

(CNN) -- Voters in several key swing states are now rolling the dice if they mail in their ballots, with their votes potentially jeopardized if they don't arrive by Election Day.

A court ruling about Minnesota on Thursday evening effectively moved up the deadlines for mail-in ballots to be received by the state, from a week after Election Day to 8 p.m. on November 3. And several Supreme Court orders earlier in the week left in place windows after Election Day for mailed ballots to be received by Pennsylvania and North Carolina -- but didn't resolve questions about the constitutionality of those votes.

The unresolved legal questions in the major battlegrounds has prompted a flurry of political leaders, especially Democrats, to urge voters to no longer rely on the mail for casting their absentee votes. They've warned that voters are now past the safe window for mailed ballots to arrive on time and be counted.

"Do not wait," Pennsylvania Gov. Tom Wolf, a Democrat, said Thursday. "At this point, voters should hand-deliver their ballots to be assured their vote will be counted."

In recent weeks, the Trump campaign and Republicans in Pennsylvania, Minnesota and North Carolina challenged the validity of ballots arriving after Election Day. Federal elections happen on Election Day, they've argued in court, and not a day later. The lawsuits have left open the sliver of possibility that if the presidential election comes down to one state -- and that state's vote is extremely close -- the late-arriving ballots will be a focus of major court battles. Democrats backing former Vice President Joe Biden have said they are much more likely to vote by mail than those supporting President Donald Trump, according to polling.

"Voters should no longer place their absentee ballot in the mail," Minnesota Secretary of State Steve Simon said in a statement Thursday.

In Pennsylvania, ballots that arrive in the mail up to three days after Election Day will be counted but kept separate from other votes, after several courts looked at the issue and Republicans pushed for an Election Day deadline instead of state officials' plans to receive ballots until November 6.

And in Minnesota, a federal appeals court said on Thursday it didn't believe ballots received after Election Day should be counted, ordering instead that they be set aside. The Secretary of State previously had announced a deadline a week after November 3.

The Republicans' approach -- with arguments that state officials shouldn't accommodate for the vast numbers of absentee voters during the pandemic -- ultimately may make it harder for voters to cast absentee ballots in the coming days, even if they follow state guidelines in good faith.

Trump's campaign and members of the Republican Party have argued their lawsuits are intended to uphold existing voting laws and push back against Democratic efforts to make voting easier and less secure. Some justices in the conservative majority of the US Supreme Court have also indicated they'd support strict interpretation of state laws no matter the pandemic.

But voting experts say the challenges from Republicans have amounted to the most aggressive legal campaign against voting access in recent memory -- making it more likely ballots from voters acting in good faith will be tossed.

"The amount of litigation that we have seen in this election is staggering," said Myrna Perez, director of the Brennan Center's Voting Rights and Elections Program.

"What I think is shocking -- and voters would be surprised to learn -- is how much of that litigation has been by campaigns to try and limit voter access, in some cases hauling election administrators into court because they are trying to provide good customer service to their voters in a time of a once-in-a-century pandemic," Perez added.

The federal appeals court that decided the Minnesota case in favor of Republicans on Thursday acknowledged that they may be creating some confusion and election administration issues. Yet that was preferable to mixing in late-arriving votes that may not be legal with ones cast on time, the court wrote.

"Better to put those voters on notice now while they still have at least some time to adjust their plans and cast their votes in an unquestionably lawful way," the court wrote.

Pennsylvania, one of the most critical states in the presidential election, is currently allowing mail-in votes to be counted if they arrive three days after November 3, so long as they are postmarked by Election Day -- even if the postmark is illegible. The state Supreme Court upheld that deadline in September.

This week, the US Supreme Court on Tuesday declined to take up another GOP challenge to the state's ballot receipt deadline. But while the US Supreme Court kept the deadline in place for now, some of the court's conservative justices suggested skepticism of the deadline's legality, sparking fears from election experts and Democrats that ballots arriving after November 3 could later be challenged in court and endangered. The state has advised counties to keep the late-arriving ballots segregated from others if they need to be identified.

In Minnesota, the state's leaders could still appeal Thursday's ruling to the Supreme Court, although the high court has repeatedly chosen to keep the status quo in cases that come to it.

Even with late-arriving ballots potentially on their way to legal limbo, the Supreme Court previously indicated it may be wary of throwing out votes cast in good faith. In that separate case regarding South Carolina, the high court sided with Republicans to reinstate a witness-signature requirement on absentee ballots. The court, however, grandfathered in ballots cast before and within two days of its order, so that those votes would be counted despite the decision.

Legal challenges across the country

Perez of the Brennan Center said the effect of the GOP legal strategy is that election officials, rather than preparing for executing the election, are devoting energy to coming up with their own legal strategy "for what happens if the rules change out from under them."

The mail-in ballot deadline disputes add to myriad efforts by Republicans to make it more difficult to cast a ballot this year.

In Texas, Republican Gov. Greg Abbott limited counties to one drop-box, which Democrats unsuccessfully challenged in the courts.

A group of Republicans, meanwhile, is pursuing litigation to stop drive-thru voting in Harris County -- a Democratic stronghold in recent elections -- with a new challenge this week after the Texas Supreme Court ruled that it could proceed. Harris County is home to Houston and the largest county in the state, with 2.4 million registered voters.

The Republican petition also asks that drive-thru ballots are stopped from tabulation until the court issues an order. The votes are set to be counted starting the morning of Election Day.

In Nevada, Republicans have tried to stop the counting of ballots at early voting sites, arguing that observers are not allowed to be close enough and that the software used to verify signatures is not set stringently enough. A state judge is still set to rule in that case.

The Trump campaign and Republicans successfully fought a Democratic attempt in Wisconsin to extend the deadline for mail-in ballots to be received, so long as they were postmarked by Election Day. The Supreme Court sided with a federal appeals court upholding the deadline of Election Day this week -- a win for Republicans.

But the Supreme Court also gave Democrats a win in North Carolina by keeping in place a lower court ruling that allowed ballots to arrive nine days after Election Day, if they are postmarked by November 3.

Pennsylvania, a state Trump won in 2016 and that is being fiercely contested in 2020, has sparked legal battles beyond the mail-in deadline.

In September, the Pennsylvania state Supreme Court sided with Republicans by ruling that so-called "naked ballots," which are returned without "secrecy envelopes," would be rejected, even if there are no other problems with the ballot. That same ruling also included victories for Democrats that set the stage for the recent case over the ballot receipt deadline that went to the US Supreme Court.

Trump again attacked Pennsylvania's post-election ballot receipt rules on Twitter Thursday, calling the deadline "a disaster for our Nation," and falsely accusing Democrats of trying to "steal this election."

Aside from the challenges in recent key states, more than 20 states allow ballots to arrive after Election Day, so long as they are postmarked by Election Day.

Delays in mail delivery have only exacerbated concerns that ballots sent before Election Day won't make it in time.

House Speaker Nancy Pelosi repeated the warning about relying on the mail on Thursday, saying she hoped voters at this late point wouldn't depend on the Postal Service to get their ballots in on time.

The US Postal Service, for its part, made its own announcements Thursday to encourage faith in the mail. The USPS deadlines for sending ballots through the mail have already passed in states where ballots have to be in by November 3.

"With increased volume in both mail and packages and external challenges, mail is moving," USPSs chief retail and delivery officer Kristin Seaver said in a statement.

Several states are still giving voters the option to have a ballot mailed to them. Yet even then, voting on time becomes less practical.

"At this point, it is simply too late for any absentee voter who has not yet mailed their ballot to do so with confidence that it will arrive by Election Day," Eight Circuit Court of Appeals Judge Jane Kelly wrote in her dissent to the Minnesota ruling on Thursday.