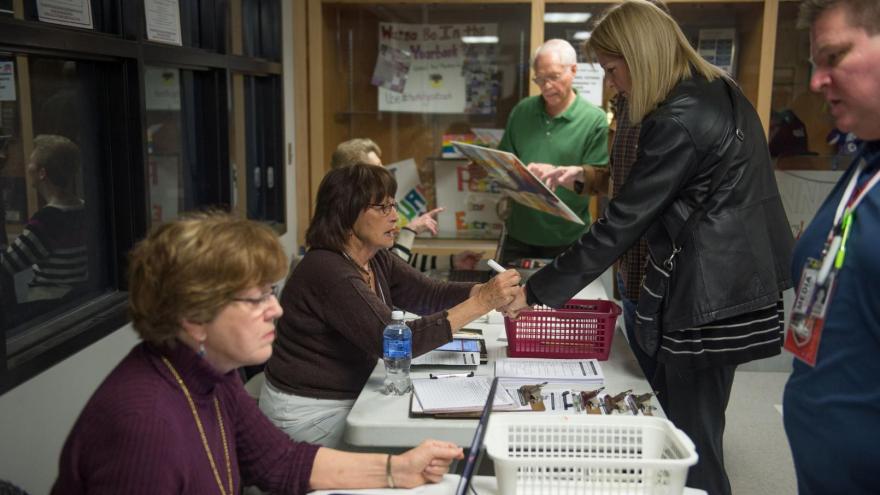 (CNN) -- The Democratic National Committee has recommended rejecting proposals from Iowa and Nevada that would allow virtual caucuses, injecting uncertainty into the party's presidential voting process five months before the ballots are cast in the early states.

The Democratic Party -- which has been especially concerned about cyberattacks and tampering following a Russian hack effort in 2016 that led to the disclosures of emails from party leaders -- is citing security concerns in making its decision, and recommending a waiver be granted to Iowa and Nevada from DNC rules that encouraged states to switch from caucuses to primaries.

"We concur with the advice of the DNC's security experts that there is no tele-caucus system available that meets our standard of security and reliability given the scale needed for the Iowa and Nevada caucuses and the current cyber-security climate," DNC Chair Tom Perez and Rules and By-Laws Committee Co-Chairs Lorraine Miller and Jim Roosevelt said in a statement Friday.

"For these reasons, we are recommending to the committee that virtual caucus systems not be used in the Iowa and Nevada 2020 caucus processes, and unless compliance can be met through other means, that the committee consider a waiver."

The Rules and Bylaws Committee plans to hold a work meeting by telephone next week to discuss final certification of the primary and caucus plans, including those proposed by Iowa and Nevada.

Both states have proposed instituting virtual caucusing to comply with new rules the DNC approved in August 2018 that encouraged states to switch from caucuses to primaries.

Virtual caucusing aims to give flexibility to voters -- such as those who work late, have disabilities or can't appear in-person at caucuses -- by allowing them to cast votes by telephone.

"We are obviously disappointed by this outcome, and we continue to have confidence in the abilities of our vendors, but if the DNC does not believe the virtual caucus can be secure, then we cannot go forward," Iowa Democratic Party Chair Troy Price said in a statement Friday, adding that the party will "explore what alternatives may exist to securely increase accessibility from previous years given the time allowed."

During a press conference Friday, he noted, "Iowa will be a caucus and Iowa will be first."

William McCurdy, the chair of the Nevada Democratic Party, said in a statement, "Unfortunately, the DNC has advised we not go forward with this process due to threats against our Democratic infrastructure and Republican inaction to prevent future attacks in the upcoming election cycle."

"The Nevada Democratic Party has long been committed to expanding access to the caucus process -- including pioneering workplace caucus sites," McCurdy said.

Sen. Ron Wyden, known for his calls for comprehensive election security, praised the DNC for its recommendation.

"One of the biggest lessons from 2016 is that election officials and parties must make cybersecurity a key consideration for every decision in our elections process," the Oregon Democrat said. "The DNC is doing the right thing by insisting on strong security measures for voters who caucus at home. Intelligence officials have made clear that foreign governments will exploit insecure technology to interfere in our democracy, which is why I've proposed legislation to secure our election systems, and to help protect state parties against cyberattacks."

During the DNC's summer meeting last week in San Francisco, party officials held multiple meetings behind closed doors with representatives from the early caucus states to discuss security issues. DNC staff and members expressed strong concern about risks involved with virtual caucusing, including that it could be tampered with or hacked.

Don Fowler, former DNC chairman and current member of the Rules and Bylaws Committee, told CNN Friday that he suspects the decision was more political than due to technological hindrances.

Still, he voiced his confidence in Iowa.

"The state party in Iowa is one of the best state parties in the whole United States," he said. "I have great confidence in what they do in Iowa."

Maria Cardona, a DNC member of the Rules and Bylaws Committee and CNN contributor, called potentially holding off on having virtual caucuses "a smart thing to do" at this time.

"We met about this in San Francisco, and it was a passionate meeting on both sides. Iowa made their case, the DNC made their case. They have been working in good faith together. At this point, the plans to have a virtual caucus are not sufficient to give confidence that they're not going to be hacked," Cardona told CNN.

The worst thing that could happen, Cardona argued, "is for us to move forward with that, a system we're not 100% sure of, and then it gets hacked. That would be like the worst-case scenario for everyone involved, including and most of all, the Iowa caucuses."

There have been "continuing conversations between Iowa and the DNC, including both the DNC's cybersecurity staff and the co-chairs of the Rules and Bylaws committee," a Democratic official told CNN Friday.

"The proposed system could lead to a potential hack of the caucuses and that is too big a risk for the party," a source briefed on the matter told CNN.

The source added that several presidential campaigns had raised concerns about virtual caucusing to the DNC.

A second Democratic source told CNN that the DNC informed Iowa and Nevada that there are major vulnerabilities in their plans for virtual caucusing.

Iowa officials -- frustrated when news broke that the DNC was preparing to reject their plan -- have been working with party officials to find an alternative solution.

The second Democratic source told CNN the biggest concerns were with Iowa because virtual caucusing solely involves voting by phone without a paper ballot.

Nevada has proposed an option beyond vote by phone that includes in-person early voting, which could be part of the first-in-the-West state's solution to getting its plan officially approved.

Cardona told CNN that the party's hope is they can hold virtual caucuses the next election cycle so more people can be involved in the process.

"There is frustration on behalf of the (Rules and Bylaws Committee), on behalf of the (Iowa Democratic Party), but I think it's all geared towards a good-faith effort to do what we wanted to do in the first place in the name of opening up democracy," Cardona said.

Another could be to have some form of paper ballots -- though that could provoke protests from New Hampshire, which touts its first-in-the-nation primary, for seeming too much like a primary.

A Democratic official told CNN that the DNC has no interest in spurring a calendar fight between Iowa and New Hampshire, the two earliest states on the primary calendar.

And there are no plans to take away Iowa's status as the first-in-the nation caucus state, the official said.

Ray Buckley, chair of the New Hampshire Democratic Party, told CNN that he and his party remain "resolute in protecting the first-in-the-nation primary," but believe that the DNC and the Iowa Democratic Party will work out their issues over virtual caucusing and not step on New Hampshire's status as the first primary.

"We are committed to the four early states, we remain resolute in protecting the first-in-the-nation primary and we believe that the folks in our other sister states are committed to each other as well. We are four states that work closely together and we stand together," Buckley said in an interview Friday.

The Des Moines Register and The New York Times were among the outlets to earlier report on the DNC's intentions to reject Iowa's plan.

To meet the DNC rules, several states, including Colorado, Maine, Minnesota, Utah, have switched from Democratic presidential caucuses to primaries for the upcoming presidential election.

Several of the states' plans were conditionally approved in June by the Rules and Bylaws committee, which has final approval over the plans. The committee also met with the states' representatives in a closed-door session last week to discuss security issues. States must receive final approval from the committee to hold their presidential contests next year.

The DNC has sought to take steps to prevent a repeat of 2016's hacks by investing in cybersecurity, including by hiring Bob Lord, a former Yahoo! executive, as the party's chief security officer.