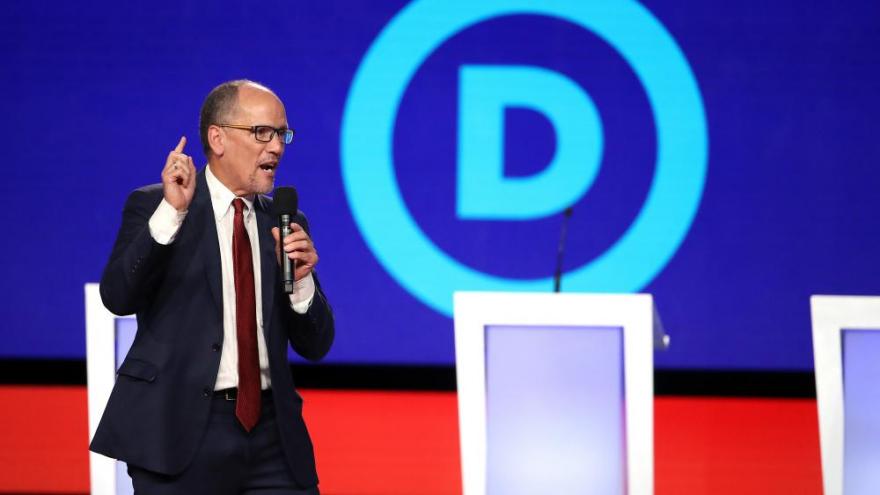 Pete Buttigieg holds a slim lead over Bernie Sanders in the Iowa caucuses with the Iowa Democratic Party announcing on Thursday night that 100% of precincts are reporting.

(CNN) -- Pete Buttigieg holds a slim lead over Bernie Sanders in the Iowa caucuses with the Iowa Democratic Party announcing on Thursday night that 100% of precincts are reporting.

The Democratic candidates have until 1 p.m. ET/12 p.m. CT on Friday to file a request for a recanvass or a recount. If there are no challenges by that time, CNN plans to report a winner.

"That's fantastic news," Buttigieg said during a CNN town hall on Thursday. "First of all, I want to say, Sen. Sanders clearly had a great night too and I congratulate him and his supporters."

The news came after another day of chaos in the wake of Monday's caucuses.

Democratic National Committee Chair Tom Perez called for a recanvass of all results in Iowa on Thursday, as the state's Democratic Party continued to struggle to verify the data from Monday night's caucuses, which represented a signficant step in the fallout from the chaos that followed the quadrennial event. In a recanvass, all the numbers released by the state party would be checked against the results that were recorded at caucus sites.

"Enough is enough," Perez tweeted. "In light of the problems that have emerged in the implementation of the delegate selection plan and in order to assure public confidence in the results, I am calling on the Iowa Democratic Party to immediately begin a recanvass."

Perez followed up his initial tweet by writing, "A recanvass is a review of the worksheets from each caucus site to ensure accuracy. The (Iowa Democratic Party) will continue to report results."

Perez, in the tweet, is specifically raising questions about how the Iowa Democratic Party is adhering to the plan they submitted to the national party. That plan guided how the state party would allocate delegates.

Iowa Democratic Party Chair Troy Price released a statement responding to Perez, saying the party is prepared to conduct a recanvass "should any presidential campaign" request one.

"Should any presidential campaign in compliance with the Iowa Delegate Selection Plan request a recanvass, the IDP is prepared," he said. "In such a circumstance, the IDP will audit the paper records of report, as provided by the precinct chairs and signed by representatives of presidential campaigns. This is the official record of the Iowa Democratic caucus, and we are committed to ensuring the results accurately reflect the preference of Iowans."

CNN has reached out to the party for further clarity on its next steps.

In a news conference on Thursday after Perez's tweet, Sanders declared a strong victory, noting his lead in the popular vote, and called the delay in reporting results "a big screw-up." The Iowa Democratic Party released the popular vote totals for the first time this year, but CNN determines the winner of the Iowa caucuses by who leads in state delegates. State delegates are used to choose national delegates, which determines who wins the Democratic nomination.

A CNN analysis shows errors in the count reported by the Iowa Democratic Party.

Precinct-level data reveals multiple precincts where violations of the caucus rules may have occurred. In several precincts, the total vote reported in the final round of the popular vote exceeded the total vote in the first round, even though no one new should have been allowed into the room between the two rounds. And in some cases, a viable candidate lost support from the first round to the final round, even though supporters of viable candidates in the first round were supposed to be locked in to their first choice.

At satellite caucuses, the number of state delegate equivalents awarded per congressional district was calculated based on the turnout across all satellite caucuses within that district. The reported total state delegate equivalents appear to differ from the expected values based on the reported first round vote and the formulas announced by the Iowa Democratic Party.

Perez took the step of calling for a recanvass specifically because of issues around how the Iowa Democratic Party was allocating state delegate equivalents from satellite caucus sites and the broader inconsistencies that have become clear in recent days, two sources with knowledge tell CNN.

One person familiar with Perez's decision said it was done to get ahead of calls for a recount from candidates, something the party worried would look divisive.

The Iowa Democratic Party did not have advance warning that Perez was planning to call for a recanvass, according to two people familiar with the matter.

Left unsaid in Perez' tweet is that about a dozen DNC officials have been on the ground in Iowa since the caucuses, overseeing the process of verifying and chasing down data from precincts across the state.

But the tweet is indicative of the tensions between the Iowa Democratic Party and the DNC that CNN reported Wednesday.