Three deputies who fired shots at Andrew Brown Jr. will be reinstated and retrained, sheriff says 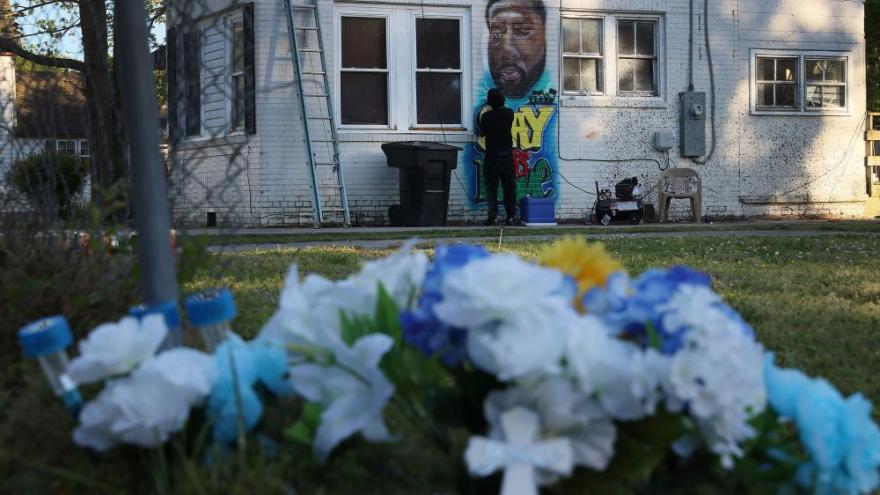 District Attorney Andrew Womble will reveal May 18 the findings of a North Carolina State Bureau of Investigation (SBI) investigation into the deputy shooting of Andrew Brown Jr.

"Mr. Brown's death, while tragic, was justified because Mr. Brown's actions caused three deputies to reasonably believe it was necessary to use deadly force to protect themselves and others," Womble said.

The three deputies who fired at Brown, a 42-year-old Black man, will be also be reinstated and retrained, Pasquotank Sheriff Tommy Wooten said Tuesday. Wooten announced disciplinary action would be taken against the deputies that responded to the scene.

"While the district attorney concluded that no criminal law was violated, this was a terrible and tragic outcome, and we could do better," Wooten said, adding that two deputies did not turn on their body cameras during the incident.

In response, an attorney for the family of Brown said she's "not sure what the discipline is going to entail."

"They did not follow their own policies," said Chantel Cherry-Lassiter, Brown family attorney. "They were not being safe during the entire interaction."

When asked if she felt the deputies should be fired, she said "it needs to be severe discipline."

Brown's family is "outraged and very disappointed by this decision," Cherry-Lassiter told CNN.

Brown was shot twice, including once in the back of the head, by Pasquotank County sheriff's deputies in Elizabeth City, North Carolina, on April 21 when they attempted to serve two felony warrants and a search warrant, Womble said.

The killing has led to protests in Elizabeth City against police violence and the authorities' lack of transparency in declining to release the videos publicly. The FBI has separately announced a federal civil rights investigation.

In coming to his decision, Womble relied on an investigative report into the shooting conducted by the North Carolina State Bureau of Investigation. That report is not considered a public record and will not be publicly released, the SBI said.

Womble also played four body-camera videos to the public for the first time on Tuesday. The footage shows the key parts of the incident, which lasts 44 seconds from the time officers exit their vehicle to the time Brown is removed from his.

Three of the seven deputies on scene fired a total of 14 shots at Brown, according to Womble. He said Brown's driving constituted a threat and justified the officers' decision to shoot, offering an expansive interpretation of what officers are legally allowed to do.

"When you employ a car in a manner that puts officers' lives in danger, that is a threat," Womble said. "And I don't care what direction you're going -- forward, backwards, sideways. I don't care if you're stationary, and neither do our courts and our case law."

His legal conclusion is a stark contrast to commentary from Brown's family and their attorneys, who have said the same body-camera and dash-cam videos show Brown was trying to drive away from officers and was not a threat. They have called the killing an "execution."

"It forced the deputies to have to resort to deadly force to protect themselves and their fellow officers," Wooten said.

"To say this shooting was justified, despite the known facts, is both an insult and a slap in the face to Andrew's family, the Elizabeth City community, and to rational people everywhere," they said. "Not only was the car moving away from officers, but four of them did not fire their weapons - clearly they did not feel that their lives were endangered. And the bottom line is that Andrew was killed by a shot to the back of the head. Interestingly, none of these issues were appropriately addressed in today's press conference."

"If we have more of an opportunity to view the video in its entirety, instead of a clip on the screen like we saw today, then we can make more of a clarity about what happened. We need more transparency, "she said.

In the filing on Tuesday, the family is asking for the release of all body and dash camera video of the incident worn by officers on April 21, between 8 a.m. and 8 p.m. that day, directly related to the execution of the warrant on Brown. The family is also asking for the SBI report into the shooting, including video, images, written reports and witness statements.

Gov. Roy Cooper, who also called for the body camera footage to be made public, said a special prosecutor should have been in charge of Brown's case.

"Federal officials should continue to thoroughly investigate this incident," Cooper said. "Public confidence would have been better served with a special prosecutor and by quickly making public the incident footage. Our state should pass specific laws to increase transparency, confidence and accountability in the justice system."

What the videos show

The videos show that uniformed law enforcement officers arrived in a marked police truck to arrest Brown and surrounded him as he sat inside his vehicle.

They ordered him to stop the car, Womble said, but Brown instead reversed his car into a corner, pulling a deputy who was trying to open the car door off his feet. Brown then accelerated forward and turned left in his attempt to flee, forcing the deputy to jump out of the way and use his arm to push away from the vehicle, the videos show.

After Brown's vehicle drove toward the deputy, a sergeant on scene then fired into the front window, the videos show. The car continued forward, and officers fired several more shots at Brown from the side and through the back windshield, he said. Brown's vehicle accelerated across a vacant lot and drove at another officer sitting in an unmarked police vehicle, which accelerated to avoid a collision, Womble said.

Brown's vehicle finally came to a rest against a tree, and the officers removed Brown and called for emergency services, he said.

A total of 14 shell casings were found on scene, including from two Glock handguns and an AR-15 style rifle, Womble said. One of the shots hit the vehicle and ricocheted into a house, he said.

An autopsy conducted by Dr. Karen L. Kelly, a forensic pathologist, found Brown was shot twice: once in the shoulder and once in the back of the head. The bullet to his head splintered into three pieces, so Womble was not able to determine which of the officers fired the fatal shot.

He said the speed at which the car was moving was not relevant in his decision, noting that Brown was surrounded on all sides by officers.

The officers arrived on scene knowing that Brown had previous convictions for resisting arrest, Womble said. In addition, he alleged that a plastic bag containing a substance consistent with crystal meth was found in Brown's mouth after his death.

In the aftermath of the shooting, Pasquotank Sheriff Tommy Wooten put seven deputies on administrative leave. He has since reinstated four deputies he said did not fire their weapons. The three who did fire remain on leave.

Family attorneys and prosecutor at odds

Attorneys for Brown's family have provided a different explanation of what the videos show.

Attorney Chance Lynch said he saw Brown ambushed while sitting in his vehicle. At all times his hands were visible, and he did not pose a threat to law enforcement, the attorney said.

In the videos viewed, Lynch said he saw Brown turn his wheel to the left, away from law enforcement, and that police officers were not visible behind his vehicle when he backed up.

"At no point did we ever see Mr. Brown make contact with law enforcement," Lynch told reporters. "We were able to see where they possibly reached out to make contact to him, but we did not see any actions on Mr. Brown's part where he made contact with them or try to go in their direction. In fact, he did just the opposite."

The attorneys for Brown's family have called for Womble to recuse himself from the case, citing "well-defined" conflicts between the prosecutor and the sheriff's office.

In his press conference Tuesday, Womble said he had not spoken to the family about the decision not to charge the deputies. He also took a defiant tone in criticizing the "misinformation" surrounding the case and accused unnamed people of saying "knowing falsehoods" on camera that were refuted by footage.

"I know that a lack of accurate information is frustrating to the public and media that operate on a 24-hour news cycle, but in this age of instant media and the impulse to immediately form an opinion, I'm asking that as we move forward we remind ourselves that in these cases we should not jump to conclusions until all the facts are out," he said.

On Twitter, North Carolina Attorney General Josh Stein, a Democrat, called on the court to release all the video footage in the shooting.

"I continue to believe it is critically important to release the full body camera footage to the public. The trust in our criminal justice system that is currently fractured will only be more difficult to repair w/o complete transparency. Now that the investigation has concluded, it is imperative that the court authorize the release of the full video to the public immediately," he said.

However, a North Carolina judge issued a written order on Monday ruling that video from four body cameras associated with the shooting will not be released publicly at this time.

At Tuesday's press conference, Womble noted that he had spoken to the judge beforehand about the video footage but did not obtain a court order to show it. He explained that he could "display" the videos now that he has made his decision not to charge the deputies involved but would not be releasing copies of the footage.