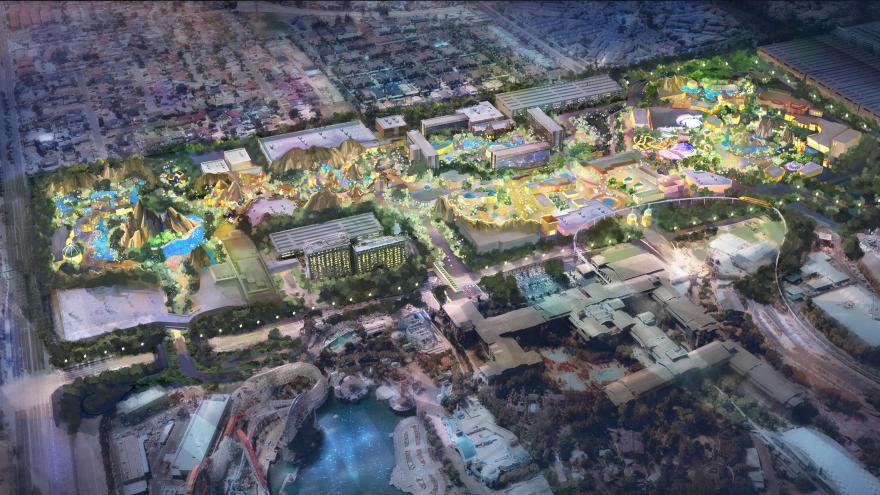 (CNN) -- Disneyland — the iconic resort whose gates have been closed for more than a year because of the coronavirus pandemic — isn't just reopening next month; it's looking to expand.

Disney is seeking to modify development approvals the resort received from the city of Anaheim in the 1990s. Those approvals created separate districts for hotels and theme parks, which Disney said it aims to modernize for more "immersive, integrated" zoning. The company said that "DisneylandForward" would help the company "meet the current and future demand in entertainment," but not did not provide any specifics regarding plans for new attractions, hotels or eateries.

"With these updated approvals, Disneyland Resort will continue to be an industry leader in bringing first-of-a-kind offerings to Anaheim, which in turn will create thousands of new jobs and help support Anaheim's funding for important services such as fire, police and public schools," Ken Potrock, the president of Disneyland resort, said in a statement Thursday.

So what does this all mean? Hard to say.

Details were scarce regarding what the company would be building in the area if the plans were accepted. However, concept art provided by the company showed a themed area with rides and mountains, intermingled with hotel-like buildings. Disney did not provide any details on either in the cost of the expansion or its timing.

What makes the announcement of "DisneylandForward" significant is that it is Disney's first commitment to expanding the parks since the pandemic shook the core of the media empire's businesses — especially its parks and resorts unit.

While Walt Disney World in Florida and other Disney parks have reopened, Disneyland — the park that started it all in 1955— lay dormant for more than a year. The months of closures for Disney's parks around the world led to major layoffs, with the company shedding more than 32,000 employees.

The Disneyland resort, which houses Disneyland and its sister theme park Disney's California Adventure, will reopen with limited capacity on April 30, the company announced earlier this month.

Disney made it a point to mention that the company is not seeking any public funding for the "DisneylandForward" or more space to build. Instead, it's looking to work within the current footprint of the resort.

"As we navigate our shared COVID-19 recovery, we again are looking at ways to pair robust leadership with bold ideas to ensure the Anaheim Resort Area stays vibrant for generations to come," Potrock added.

Disneyland's last major park expansion was Star Wars: Galaxy's Edge, a 14-acre land based on the George Lucas film series that allowed guests to ride the Millennium Falcon and dine in a galaxy far, far away.

It is the largest expansion ever at its parks and, combined with an identical land in Walt Disney World in Florida, cost the company $1 billion to build.