Diego Maradona did 'everything better and bigger, but fell more dangerously and darker' 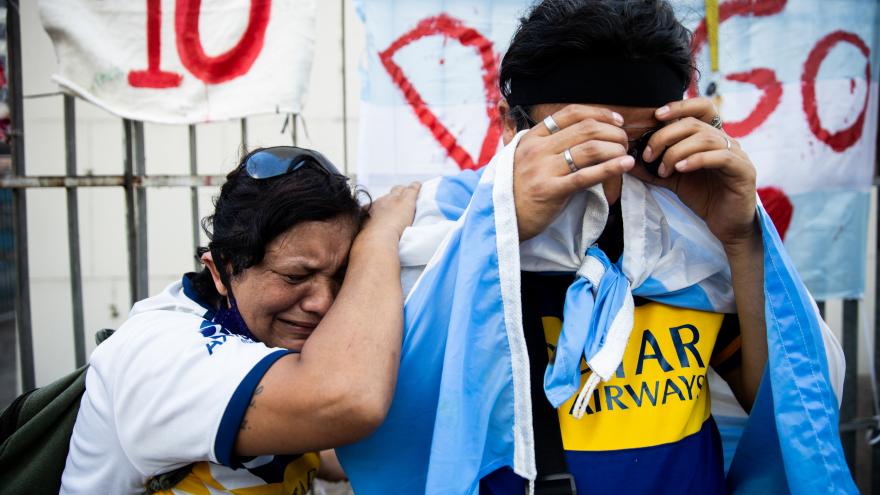 (CNN) -- Dawn had barely broken and already the queue of people waiting to pay their respects to Diego Maradona, who was lying in honor at the presidential palace in Buenos Aires, was estimated to be more than a mile long.

Some media outlets put the number of fans that would eventually gather there at around one million.

Across the Argentine capital, the city of his beloved Boca Juniors, many more paid their own special homage throughout the night, the innumerable murals of Maradona painted around the city each acting as a shrine.

Fans laid out the shirts of Argentina, Boca and Argentinos Juniors -- Maradona's first club -- across the pavements, lit candles and brought flowers. As they congregated, there was a mixture of celebration for what was and grief that his enigmatic story had ended.

La Bombonera, the famous home of Boca Juniors, was plunged into darkness -- except for one light emanating out of Maradona's personal box.

His death on Wednesday prompted an outpouring of sorrow, led by President Alberto Fernández who quickly announced three days of national mourning.

The impact of Maradona's passing, however, will be felt for many years to come in Argentina.

READ: The tormented genius who became one of football's greatest players

"For many reasons, which would probably take anthropologists and sociologists years to unravel, in Argentina football has a significant cultural role as a unifying factor in the forging of our national identity," Argentine journalist Marcela Mora y Araujo tells CNN Sport.

"So the combination of the game that people like to identify with and the best player in the world also identifying with that national emblem has led to him becoming a very treasured Argentinian -- almost national monument.

"His coffin is lying in wake today, in exactly the same way and place, where Evita's was and Peron's [former Argentina president and first lady] after her and so, in a sense, he is continuing a tradition of time honored Argentines who are also quite divisive.

"It doesn't mean everybody feels the same way about them all or that they're not controversial figures, but they represent something very, very, very key to the core of being Argentinian."

READ: Naples mourns Diego Maradona as his former club bids to rename the stadium in his honor

Maradona was Argentina's "Golden Boy," unquestionably the greatest player of his generation and one of the greatest in the game's history.

While he was already an icon before Argentina's victorious 1986 World Cup campaign, his performances in Mexico -- in particular the quarterfinal against England, which was played four years after the bloody Falklands War -- ensured his immortality in Argentina.

Maradona, as has been widely documented, was flawed, but perhaps people saw some of themselves in those imperfections.

Born in the poor Villa Fiorito area of Buenos Aires, he raised himself out of poverty but never forgot where he came from.

"He was quite unique in the ability to be quite so vulnerable, so weak, so damaged, if you like, and also so successful, so gifted, so brilliant," Mora y Araujo says. "So in a way, we are all a little bit like him and he represents all men and all humans.

"We all identify to some level with some of his contradictions, some of his vulnerabilities, some of his issues and he was just an extreme exponent, like a pendulum. He did everything better, bigger, more, and he fell lower, more dangerously and darker.

"I would suggest that's the universal aspect of his appeal. I think people all over the world identify and acknowledge and recognize that and feel somehow reassured by the incredible humanity of someone who is seemingly superhuman."

On the field, however, Maradona was as close to perfect as the game is ever likely to find.

He played football in an era not meant for players of his abilities; pitches were mud baths or dry and dusty and defenders were given free rein to scythe him down as they pleased.

But still Maradona shone, and far brighter than any of his contemporaries.

In other parts of the world -- notably England -- Maradona's "Hand of God" goal continues to remain arguably his most defining moment.

In Argentina, however, that incident is just a side note in an extraordinary legacy.

For many, it was sad to watch Maradona's health deteriorate following the end of his playing career, as he sought to fill the void that the joy of playing football had left.

"Definitely the images of the young, able Maradona dribbling, kicking the ball up in the air, smiling, training to music will prevail and they will be played over and over on a loop," Mora y Araujo says.

"If you look at pictures of him over time, he, you know, balloons in and out, he looks ill and well, old and young at various points. It's not a linear transformation at all.

"Interestingly, the still images of him overtime do exactly the same thing. You just see somebody that ages and rejuvenates and gets fatter and thinner and fitter and iller over time, not in a linear way.

"So I suspect that is what we will be left with, is this incredibly transformative being that in every expression of themselves actually had the same effect, ultimately, which is to impact millions and millions of lives."

With his death, millions of Argentines have lost a link to a glorious past, one in which they and Maradona ruled the world of football.