Dictionary.com's newest words include the Covid-inspired 'long hauler' and the more lighthearted 'yeet' 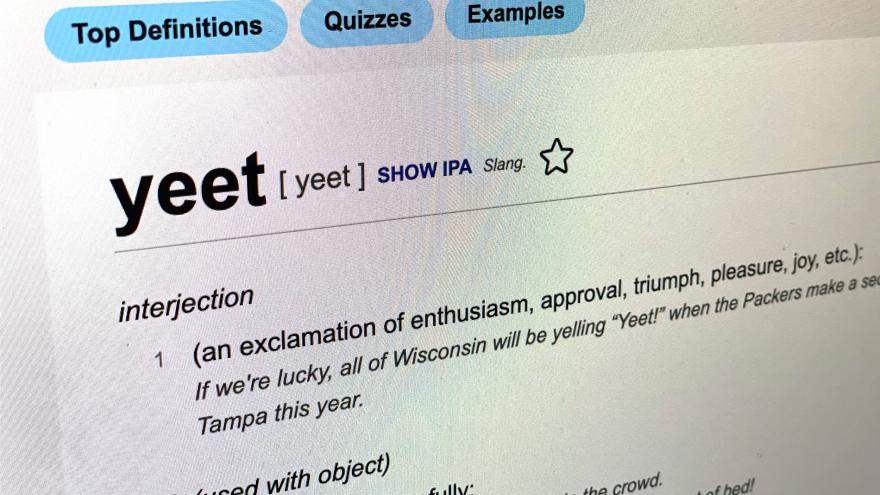 Dictionary.com just added more than 300 new words and updated definitions, which capture a wide range of emotions expressed throughout the past year and include some slang terms we picked up along the way.

Building off the online dictionary's spring additions, the new round of terms and definitions relate to the Covid-19 pandemic, race, technology and pop culture.

"It's a complicated and challenging society we live in," John Kelly, managing editor of Dictionary.com, said in a news release. "Language changes to help us grapple with it."

While Dictionary.com already had several Covid-related terms, there were still a few that needed to be added to the list.

Long COVID: a condition characterized by symptoms or health problems that linger or first appear after supposed recovery from an acute phase of Covid-19 infection.

Long haul: (Pathology) relating to or being a condition characterized by symptoms or health problems that linger or first appear after supposed recovery from an associated acute illness or active infection.

Long hauler: (Pathology) a person who experiences symptoms or health problems that linger or first appear after supposed recovery from an associated acute illness or active infection.

Aunt Jemima: (Slang: Disparaging and Offensive) a Black woman considered by other Black people to be subservient to or to curry favor with White people.

Black Code: (in the ex-Confederate states) any code of law that defined and especially limited the rights of formerly enslaved African Americans in the period immediately following the Civil War.

Cultural appropriation: the adoption, usually without acknowledgment, of cultural identity markers from subcultures or minority communities into mainstream culture by people with a relatively privileged status.

DEI: diversity, equity, and inclusion: a conceptual framework that promotes the fair treatment and full participation of all people, especially in the workplace, including populations who have historically been underrepresented or subject to discrimination because of their background, identity, disability, etc.

Hypodescent: the classifying or identifying of a biracial or multiracial individual as a member of the lower or lowest socially ranking racial group from which that person has ancestry.

JEDI: justice, equity, diversity, and inclusion: a conceptual framework that attempts to redress disparity and inequality in society, promoting the fair treatment and full participation of all people, especially in the workplace, including populations who have historically been underrepresented or subject to discrimination because of their background, identity, disability, etc.

One-drop rule: a social classification, codified in law in some states during the 20th century, that identifies biracial or multiracial individuals as Black if they have any known Black African ancestry, even from a Black ancestor many generations removed.

Other terms highlight how technology has progressed in the US.

5G: fifth-generation: being or relating to communications technology or a mobile device that supports much faster data-transfer speeds with significantly lower latency than previous versions.

Asynchronous: relating to or being a computer operation that can occur independently, without waiting for another event.

Deplatform: to prohibit (a person or people) from sharing their views in a public forum, especially by banning a user from posting on a social media website or application.

Synchronous: relating to or being a computer operation that must complete before another event can begin.

Some terms touch on more serious themes that have arisen in the past year, including.

Domestic terrorism: the unlawful use of violence or threats against a country's civilian population or government by an individual or group based and operating within the same country and without foreign direction, with the goal of furthering political, social, or ideological objectives.

Ghost gun: a gun that does not have a serial number and cannot be easily traced, especially one assembled at home from parts purchased without a background check.

Others show how conversations have evolved.

Oof: an exclamation used to sympathize with someone else's pain or dismay, or to express one's own.

Zaddy: an attractive man who is also stylish, charming, and self-confident.

And if you struggle to find the best way to address a group of people, you seem to have some more options.

Y'all: you (used in direct address usually to two or more people, or to one person who represents a family, organization, etc.).

You-all: you (used in direct address to two or more people).

Youse: you (usually used in addressing two or more people).

You-uns: you (used in direct address usually to two or more persons).

Dictionary.com noted that it's important to recognize how society has evolved, while also welcoming some fun.

"Sometimes language changes just for fun," Kelly said in the news release. "Perhaps these lighter slang and pop culture newcomers to our dictionary reflect another important aspect of our time--a cautious optimism and a brighter mood about the future ahead after a trying 2020."