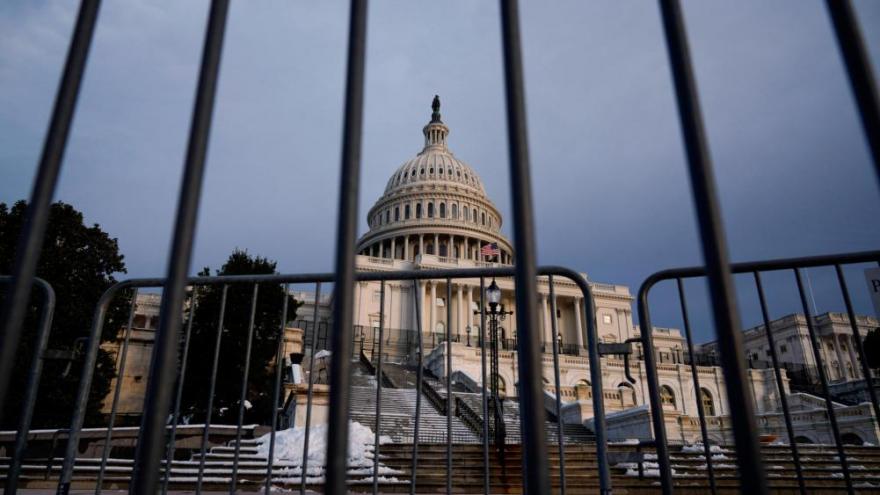 Security bike fences stand near the West Front of the Capitol on January 5, 2022 in Washington. There has been an increase in online extremist content in the past 48 hours, including threats to lawmakers and the President, according to a Department of Homeland Security intelligence memo obtained by CNN.

(CNN) -- There has been an increase in online extremist content in the past 48 hours, including threats to lawmakers and the President, according to a Department of Homeland Security intelligence memo obtained by CNN.

While there is still no indication of a specific and credible plot, officials fear the content could inspire violence, particularly by lone offenders. Law enforcement and federal authorities in the Washington, DC, region stepped up security efforts this week in anticipation of the first anniversary of the January 6 attack on the US Capitol.

The DHS intelligence memo warns that potential violence could be directed against political and other government officials, including members of Congress, state and local officials, and high-profile members of political parties.

It was sent from DHS intelligence chief John Cohen to federal, state and local law enforcement on Thursday afternoon, noting the threat of violence could extend beyond the Washington, DC, area.

The online content, identified by DHS and the Federal Bureau of Investigation, includes a video listing 93 members of Congress who it says were involved in voting to certify the 2020 "fraudulent" presidential election.

The video, posted on a forum known to host QAnon-related content and reposted on other sites, called for the members of Congress to be hanged in front of the White House. Since the original video surfaced online in early December, it has been viewed more than 60,000 times across all platforms, according to the intel notice.

A separate posting online references January 6 as a potential day to conduct assassinations against Democratic political figures, including President Joe Biden, because of the perceived fraudulent election, the memo states.

The Federal Protective Service has expanded patrols in and around federal facilities across the country, according to the memo. The US Secret Service, US Capitol Police, and the DC Metropolitan Police are "aware of this online activity, and investigations have been initiated, as appropriate," the memo states.

There has been a dramatic uptick in threats made against lawmakers, with 9,600 in 2021 alone, Capitol Police Chief Tom Manger said this week. A senior Capitol security official attributed that increase in part to "a more bitter and partisan political environment and citizens for whom the issues that they're angry about are core value and identity issues."

On Thursday afternoon, during an Anti-Defamation League panel discussion, Homeland Security Secretary Alejandro Mayorkas said the department is working to inform local communities, without referencing this week's uptick in threats.

"We are doing so by spreading information about what we know, so that the playing field, the landscape of law enforcement and public awareness more generally, is alert to the information that we have in our possession, so that we are all working on the same set of facts and all understand that the of the threat that is before us," he said.

CNN previously reported that in the days ahead of the anniversary of the January 6 attack on the US Capitol, federal officials had seen an increase in unspecified calls for violence, the targeting of politicians and calls for rebellion on domestic violent extremist forums, according to a federal law enforcement official.

Federal officials warned last week that "threat actors" may take advantage of the anniversary of the riot.

"We assess that threat actors will try to exploit the upcoming anniversary of the 6 January 2021 breach of the US Capitol to promote or possibly commit violence," an intelligence assessment issued last Thursday to state and local officials said.

Lone offenders were the most likely threat to the anniversary, according to the intelligence assessment.

Conspiracy theories about election fraud continue to resonate among domestic violent extremists and could again inspire some to promote or commit violence, according to the assessment, which was prepared by the Department of Homeland Security, FBI, US Capitol Police and other law enforcement agencies.