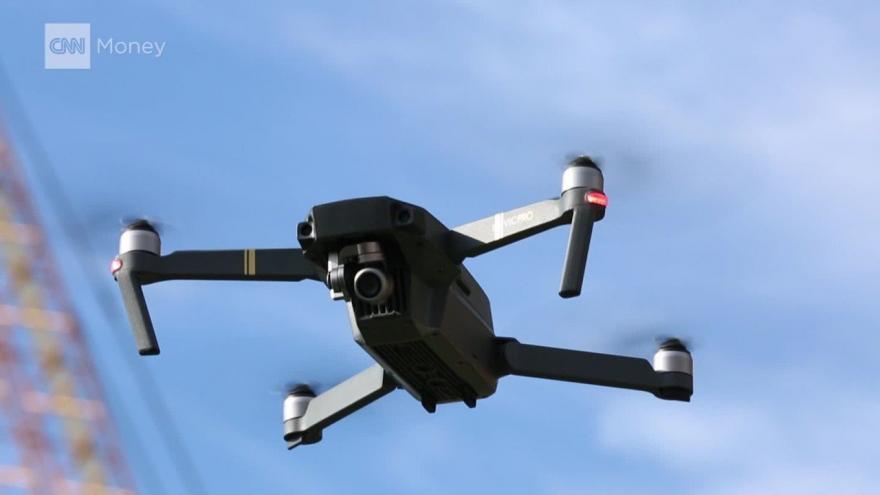 (CNN) -- Chinese-made drones may be sending sensitive flight data to their manufacturers in China, where it can be accessed by the government there, the US Department of Homeland Security warned in an alert issued Monday obtained by CNN.

The drones are a "potential risk to an organization's information," the alert from DHS's Cybersecurity and Infrastructure Security Agency states. The products "contain components that can compromise your data and share your information on a server accessed beyond the company itself."

The report does not name any specific manufacturers, but nearly 80% of the drones used in the US and Canada come from DJI, which is headquartered in Shenzhen, China, according to one industry analysis. US local law enforcement organizations and infrastructure operators have grown to rely on drones in recent years.

"The United States government has strong concerns about any technology product that takes American data into the territory of an authoritarian state that permits its intelligence services to have unfettered access to that data or otherwise abuses that access," the alert says.

"Those concerns apply with equal force to certain Chinese-made (unmanned aircraft systems)-connected devices capable of collecting and transferring potentially revealing data about their operations and the individuals and entities operating them, as China imposes unusually stringent obligations on its citizens to support national intelligence activities," the alert adds.

The warning from DHS follows an executive order signed by President Donald Trump last week that effectively banned US firms from using telecommunications equipment made by the Chinese company Huawei, which has drawn similar national security concerns of government spying.

The US and China are currently locked in a trade war that has frayed the two countries' relationship as it deteriorated in recent weeks.

US officials have raised national security concerns about Chinese-made drones in the past. In 2017, the US Army issued a ban the use of DJI drones, alleging in a memo that the company shared critical infrastructure and law enforcement data with the Chinese government.

Also that year, an internal report from an intelligence division of the Immigrations and Customs Enforcement agency in Los Angeles assessed that DJI was "selectively targeting government and privately owned entities within (the US. critical infrastructure and law enforcement sectors) to expand its ability to collect and exploit sensitive US data."

Users are warned to "be cautious when purchasing" drones from China, and to take precautionary steps like turning off the device's internet connection and removing secure digital cards.

The alert also warns users to "understand how to properly operate and limit your device's access to networks" to avoid "theft of information."

"Organizations that conduct operations impacting national security or the Nation's critical functions must remain especially vigilant as they may be at greater risk of espionage and theft of proprietary information," the alert states.

In a statement, DJI said that it gives customers "full and complete control over how their data is collected, stored, and transmitted," adding that "customers can enable all the precautions DHS recommends."

"At DJI, safety is at the core of everything we do, and the security of our technology has been independently verified by the U.S. government and leading U.S. businesses," DJI said.

"For government and critical infrastructure customers that require additional assurances, we provide drones that do not transfer data to DJI or via the internet, and our customers can enable all the precautions DHS recommends. Every day, American businesses, first responders, and U.S. government agencies trust DJI drones to help save lives, promote worker safety, and support vital operations, and we take that responsibility very seriously," DJI said.

DJI, which reported $2.7 billion in revenue in 2017, is best known for its popular Phantom drone. Introduced in 2013, the drone is the top-selling commercial drone on the market.

Seventy-nine percent of drones operating in the US and Canada and 74% globally are made by DJI, according to a 2018 market sector report from Skylogic Research, an industry analyst.

Industry experts say the drone's easy-to-use software combined with sophisticated cameras and advanced technology allowed DJI to take over sales in the US for hobbyists, as well as professional organizations.

"A lot of companies found out that using a drone to inspect a roof or to inspect industrial facilities is a really good way -- you save a lot of people climbing ladders," said Kay Wackwitz, the CEO of Drone Industry Insight, a market research and consultancy company focused on the commercial drone market.

Agencies from local police departments to the Interior Department have used drones for sensitive work. According to the 2017 ICE memo, contractors in Kansas building a DHS bio-defense facility used a DJI drone "to assist with construction layout and provide security during construction."