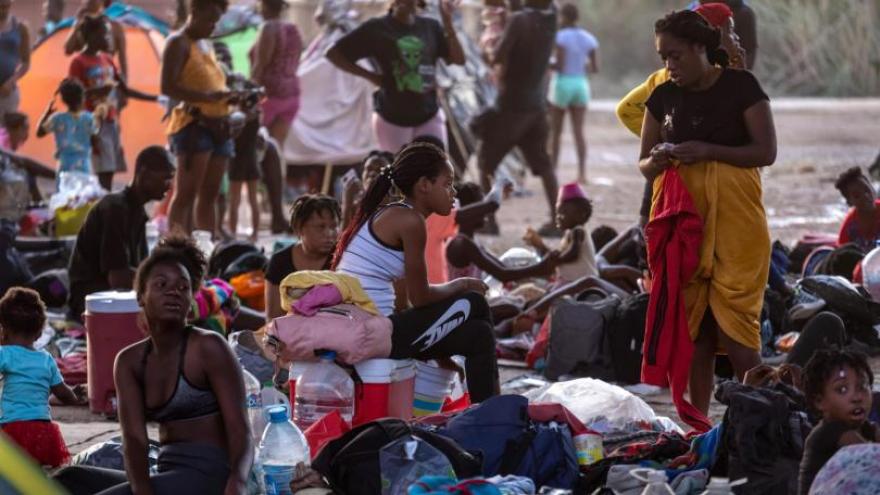 Migrants under the international bridge at a camp on the U.S.-Mexico border on Sept. 21, 2021 in Del Rio, Texas are seen. The immigrants, mostly from Haiti have numbered as high as 14,000 at the camp.

(CNN) -- The Department of Homeland Security is releasing some Haitians into the United States, despite repeated claims that they would be immediately expelled from the US, as the Biden administration scrambles to address the massive migrant encampment under the Del Rio International Bridge in Texas.

While it's unclear how many are being allowed into the US, the release of at least some migrants into the US was expected, though DHS officials have emphasized in recent public statements that most migrants would be expelled or put in expedited removal proceedings.

Families seeking asylum, for example, would have a legal basis to stay in the US and could be released with a notice to appear at an immigration office, as has happened on other parts of the border.

CNN has seen some buses dropping off Haitians and people of other nationalities at a nongovernmental organization in Del Rio, where they buy their bus or plane tickets, then they are dropped off at a gas station where buses pick them up and take them to San Antonio and from there to other parts of the country.

On Tuesday, DHS conducted four repatriation flights from Del Rio to Port-au-Prince, Haiti, with a total of 523 Haitian nationals on board, according to a Homeland Security spokesperson.

The Biden administration is still relying on a Trump-era border policy linked to the coronavirus pandemic that allows border authorities to swiftly remove migrants apprehended at the US-Mexico border. Over recent days, the administration has ramped up those removals and increased the pace of repatriation flights.

But the Biden administration also has increasingly released migrant families into the US over recent months. In August, the latest month for which data is publicly available, more than 70,000 migrant families were allowed into the US, while around 16,000 were expelled, according to US Customs and Border Protection.

"I want to make sure that it is known that this is not the way to come to the United States," Mayorkas said. "Trying to enter the United States illegally is not worth the tragedy, the money or the effort."

"If you come to the United States illegally, you will be returned," he added. "Your journey will not succeed, and you will be endangering your life and your family's lives."

Speaking at a Senate panel hearing Tuesday, Mayorkas said the administration hopes to clear out the migrant camp under the bridge within the next nine or 10 days and expects to see "dramatic results in the next 48 to 96 hours." Mayorkas told CNN on Tuesday that US authorities had moved approximately 4,000 migrants from under the bridge.

More than 8,000 migrants, many of whom are Haitian, are estimated to remain at the Del Rio bridge in a crisis that some observers have described as inhumane, and recent images of law enforcement officers on horseback using aggressive tactics against migrants have sparked anger in both local and federal officials.

Politically, the crisis has renewed scrutiny of the Biden administration's immigration policies and has prompted fresh criticism from Republicans such as Texas Gov. Greg Abbott.