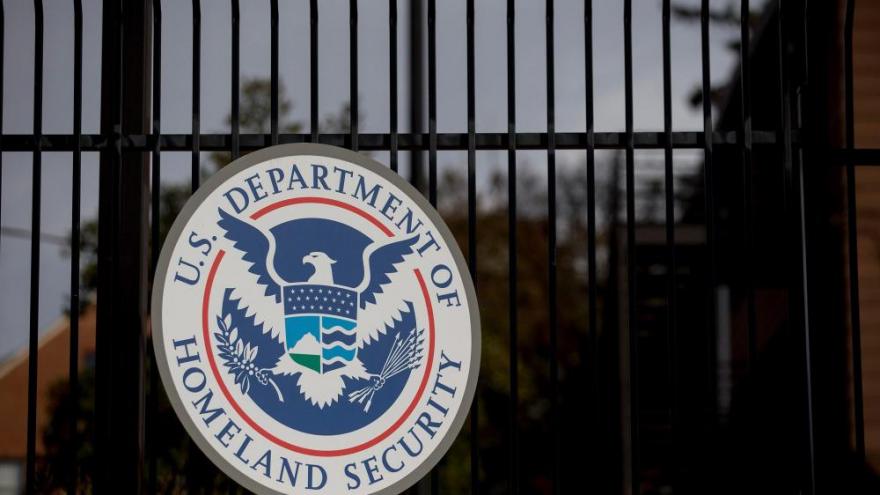 The U.S. Department of Homeland Security (DHS) seal hangs on a fence at the agency's headquarters in Washington, D.C., in December 2014.

(CNN) -- Department of Homeland Security officials are warning that the same sort of rhetoric and false narratives that fueled the January 6 attack on the US Capitol could lead to more violence this summer by right-wing extremists.

A growing belief among some Donald Trump supporters that the former President will be reinstated in August, coupled with relaxed Covid-19 restrictions, has DHS officials concerned that online rhetoric and threats could translate into actual violence in the coming months as more people are out and in public places.

The August theory is essentially a recycled version of other false narratives pushed by Trump and his allies leading up to and after January 6, prompting familiar rhetoric from those who remain in denial about his 2020 election loss. But the concern is significant enough that DHS issued two warnings in the past week about the potential for violence this summer.

In a closed-door meeting last Wednesday, DHS officials briefed lawmakers on the role that misinformation and disinformation play in creating circumstances for people to act violently, according to a congressional source familiar with the briefing.

On Monday, DHS issued an intelligence bulletin to state and local law enforcement partners about the increasing opportunities for violent extremist attacks this summer, including concerns that QAnon conspiracy theorists continue to promote the idea that Trump will return to power in August, according to a source familiar.

This latest series of warnings reflects an effort by DHS to be more proactive in sharing information about domestic extremist threats since pro-Trump rioters stormed the US Capitol on January 6, but it also comes as the department is still grappling with tough truths about its own role in the security breakdowns that occurred nearly six months ago.

The department has "no evidence" of a threat associated with the supposed date of Trump's return to office, but historically some domestic violent extremists "have conducted violence in furtherance of conspiracy theories," the bulletin said.

The bulletin also assessed the possibility that domestic terrorists might seek to exploit the easing of Covid-19 restrictions in order to attack a range of potential targets. The bulletin and briefing were first reported by Politico.

Some Trump supporters alluded to that possibility over the weekend during a rally in Ohio, where they were blunt in their assessment of what would happen if the former President were not reinstated later this summer.

"We are going to be in a civil war," one Trump supporter told CNN's Donie O'Sullivan.

Those concerns have prompted the department to ramp up its efforts working with state and local law enforcement and nongovernment entities to detect potential threats and mitigate them, the senior DHS official said.

A DHS spokesperson said the department is "focused on the nexus between violence and extremist ideologies" and is working to "prevent acts of domestic terrorism inspired by disinformation, conspiracy theories and false narratives spread through social media and other online platforms."

The attack on January 6 exposed security breakdowns across a host of law enforcement agencies, including massive intelligence failures, critical miscommunications and unheeded warnings that ultimately led to the chaotic response that day.

Those problems ultimately redound onto DHS, an agency created to address similar intelligence breakdowns that occurred ahead of the 9/11 attacks and that has assumed responsibility for countering a rising threat posed by domestic extremists in recent years.

Yet there has not been a full accounting of DHS' role in the security failures that occurred on January 6 despite the investigative efforts by Congress and outside experts to date.

Among the most glaring questions is why the DHS intelligence branch did not produce any bulletin or warning about the potential for violence at the Capitol on January 6.?

Asked about this lapse by CNN, the senior DHS official said there has "absolutely" been a concerted effort since President Joe Biden took office in January to push more information to the public, as well as state and local governments.

The Homeland Security inspector general office says it is reviewing whether the DHS Office of Intelligence and Analysis fulfilled its responsibility for providing intelligence to law enforcement for January 6.

Senate committees investigating January 6 noted in a recent report that DHS has "yet to fully comply with the Committees' requests for information" about its role that day, but a source familiar with the matter tells CNN that the department will likely turn over more information going forward.

The acting head of the DHS intelligence branch, Melissa Smislova, testified to Capitol Hill committees in March that it is a "complex challenge" to distinguish between people engaged in constitutionally protected activities and those involved in violent behavior.

Over the last several months, DHS has attempted to pay more attention to domestic extremist threats, conducting an operational review of the department, prioritizing information sharing and reaching out to the tech sector, among other initiatives.

DHS is also examining whether more should be done to flag high-risk individuals when they are traveling, potentially applying additional scrutiny or notification to authorities, according to the senior official. This could go a step further than the threshold for putting someone on the terrorist watch list.

For example, DHS is exploring applying this extra scrutiny to someone deemed a risk for violence by local law enforcement or an individual subject to a court order "red flag" law.

But the official emphasized that this is still under review, as are several other initiatives led by DHS that were prompted by fallout from January 6.

Meanwhile, officials are looking to August for potential threats. In addition to the Trump reinstatement conspiracy theory, it is also the anniversary of two devastating domestic terrorism incidents -- the 2019 El Paso, Texas, shooting on August 3, which killed 23 people, and the 2017 Charlottesville, Virginia, car attack on August 12.

DHS is reviewing publicly available social media for explicit threats of violence in the lead-up to the anniversaries of these events, according to the bulletin shared earlier this week.

The overarching message during the congressional briefing last week was that DHS faces a challenge in remaining vigilant to the ways online disinformation can lead to potential violence, according to a source familiar with what was said during the closed-door session.

"There are also concerns about the level of infiltration," the source said. "This mindset is not really as fringe as we would all probably like for it to be. These people are in civil society, they're in public-sector jobs and positions of authority, and that's troubling."

The FBI and DHS have also detailed how adherents to online conspiracy theories, particularly those revolving around the 2020 election, are becoming more emboldened to take action in the real world following the January 6 attack.

DHS has previously warned about the persistent threat posed by "militia" extremists who typically target law enforcement and government personnel and facilities.

The militia threat "will almost certainly continue to be elevated throughout 2021" because of sociopolitical factors, a March joint threat assessment on domestic extremism said.

Present at that Ohio Trump rally were individuals who claimed to be members of the same militia groups whose members face federal charges related to their actions on January 6, a physical reminder of concerns about the threat they still pose.

"What's scary is that these groups have specialized training, they have access to weapons, and the rage is shocking and overwhelming," one source said about some of these militia groups that took part on January 6.

"It does kind of feel like there is just sort of a giant elephant in the room -- a threat that's kind of lying in wait. It does sort of feel like it can kind of rear its head at any moment," the source added.