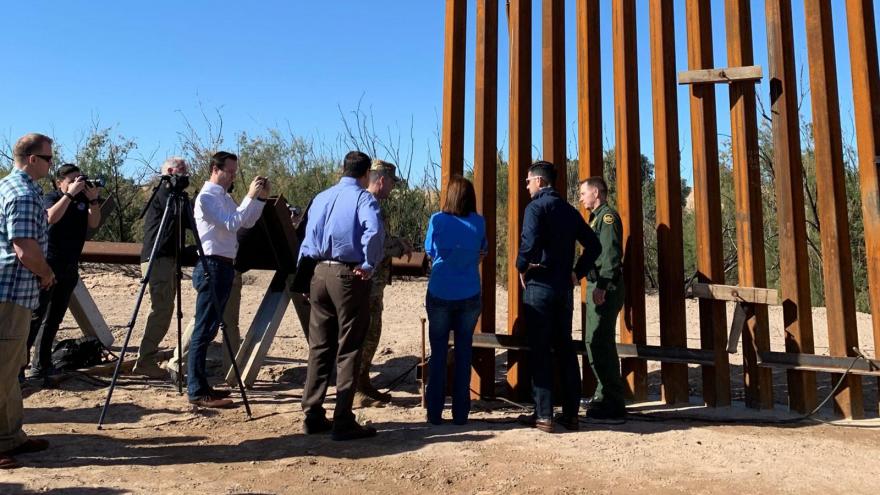 The Pentagon received a Department of Homeland Security request Wednesday to build and pay for hundreds of additional miles of border wall on the southwest border, according to the Department of Defense.

(CNN) -- The Pentagon received a Department of Homeland Security request Wednesday to build and pay for hundreds of additional miles of border wall on the southwest border, according to the Department of Defense.

The request is for roughly 270 miles of border barrier and other infrastructure to be built in areas that are considered drug corridors, a mix of rural and urban areas, a senior Department of Defense official told CNN.

Because the request is to ostensibly help combat drug smuggling, the Pentagon will be allowed to construct these barriers under its pre-existing "284" counter drug authority, which allows the Defense Department to build barriers, lighting and roads for the purpose of countering drug trafficking, according to the official.

The Pentagon will take about two weeks to put the request through an assessment involving the US Army Corps of Engineers, the Army Secretary, Defense Department lawyers and the Joint Staff and the Comptroller, the latter of which will assess where funds can be found to support additional construction, added the official.

Once the assessment is completed, Secretary of Defense Mark Esper will make a determination to approve all, some or none of the request.

"On January 15, 2020, the Department of Defense received a request from the Department of Homeland Security requesting DoD assistance in blocking up to 13 specific drug-smuggling corridors on Federal land along the southern border of the United States," Pentagon spokesman Lt. Col. Chris Mitchell said Thursday. "The Department is evaluating this request and appropriate DoD officials will make recommendations to the Secretary in the near future."

CNN reached out to the Department of Homeland Security for comment.

In order to pay for hundreds of miles of additional border wall, the Defense Department will likely have to divert funds from other military accounts in order to provide adequate funding, something it did previously to pay for $2.5 billion of wall that was authorized via the counter drug account. There is a relatively small amount of money in the Pentagon's counter-drug account.

The reprogramming of money from various military accounts into the counter-drug account to fund the border wall proved controversial among many lawmakers on Capitol Hill who threatened to strip the Pentagon of its ability to move money in the future.

The Pentagon expects work will be done by end of 2020 if the request is approved, according to the official.

CNN reported earlier this week that the Trump administration was considering diverting around $7.2 billion in additional Pentagon funding for border wall construction. Those additional funds would allow the government enough money to complete approximately 885 miles of new fencing by the spring of 2022, according to an administration official.

"They (DHS) always ask for an extensive amount and then though our assessment we make a determination of what we can do," the Defense official said Thursday.

In 2019, Trump ended a 35-day government shutdown when Congress gave him nearly $1.4 billion in wall funding, far less than he had sought. He then declared a national emergency in order to divert federal funds from other government accounts for his border wall, bypassing Congress after lawmakers refused to meet his multibillion-dollar request. The Pentagon authorized $3.6 billion in military construction funds from deferred projects overseas and planned projects in the US.

On Thursday, acting Homeland Security Secretary Chad Wolf told Fox News that the department is "pretty confident" by the end of calendar year 2020, the administration will have constructed or be in the process of constructing between 400 and 450 miles of wall.

"The President has been leaning forward on a lot of this. Obviously, we are using DoD funding to secure the Southwest border. It's national security, homeland security is national security," he said. "Certainly, from a funding standpoint, we're in good shape and we continue to remain confident."