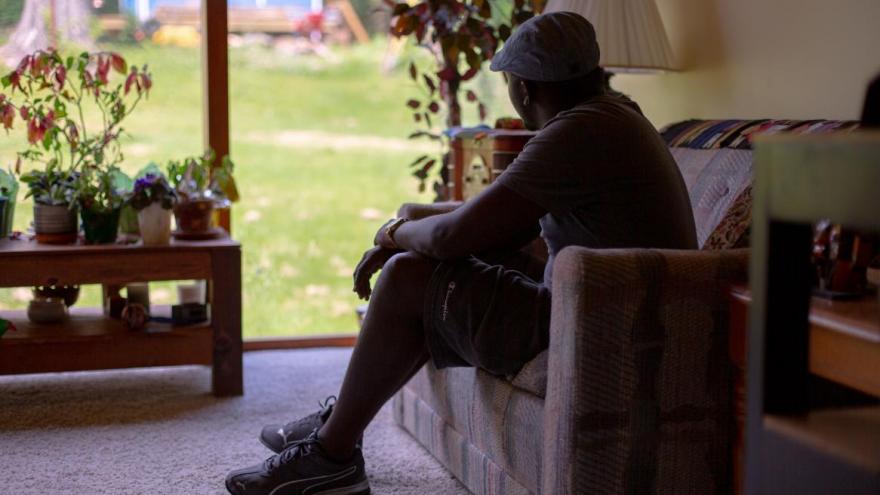 John Otieno, an asylum seeker from East Africa, was among those force fed after initiating a hunger strike during the pandemic. Otieno used a pseudonym to protect his identity.

(CNN) -- Immigration and Customs Enforcement used involuntary and invasive medical procedures, such as force-feeding and forced hydration, in response to hunger strikes by detained immigrants, according to a newly released report from the American Civil Liberties Union and Physicians for Human Rights.

The report, which is based on over 10,000 pages of documents obtained under the Freedom of Information Act, provides an in-depth look at ICE's approach to hunger strikes in its facilities from 2013 to 2017 and the trauma some formerly-detained individuals who initiated protests over poor conditions still suffer.

"Hunger striking is a form of protest that detained people may take because they see no other options," said Eunice Cho, senior staff attorney at the ACLU's National Prison Project and report co-author, in a statement. "The fact that ICE systemically responds to these strikes — which are free speech protected by the First Amendment — with coercion and violence, instead of a good faith effort to respond to the needs raised by detained people, speaks to the inherently abusive and inhumane nature of immigration detention."

ICE said in a statement Wednesday it "does not retaliate in any way against hunger strikers."

"For their health and safety, ICE carefully monitors the food and water intake of those detainees identified as being on a hunger strike. Additionally, ICE explains the negative health effects of not eating to its detainees, and they are under close medical observation by ICE or contract medical providers," the agency said.

ICE detention facilities have frequently come under scrutiny for subpar conditions, including most recently during the coronavirus pandemic. A watchdog report released in April found that detainees at an ICE detention center in Arizona filed hundreds of grievances about mistreatment, including use-of-force incidents and reported that officials did not ensure detainees wore masks and were socially distanced.

To highlight poor conditions and seek release, detainees have often resorted to hunger strikes over the years. Wednesday's report found there were hunger strikes by at least 1,378 people across 62 immigration detention centers from 2013 to 2017. It's unclear how many of those resulted in force feeding or other involuntary medical procedures, though documents obtained by the ACLU and PHR indicate involuntary medical procedures date back to at least 2012.

According to ICE guidelines, any detainee who doesn't eat for 72 hours should be referred to the medical department for evaluation and possible treatment and the agency's Enforcement and Removal Operations field office director should be immediately notified. Involuntary medical treatment can be administered "in accordance with established guidelines and applicable laws" after the clinical medical authority determines an individual's life or health is at risk.

John Otieno, an asylum seeker from East Africa, was among those force fed after initiating a hunger strike during the pandemic, according to the report.

"They put me on a bed and handcuffed me to an emergency medical stretcher," he told the report authors. "[They] strap you on the chest, waist, legs, [with] hard restraints ... there is no point in fighting back because you are there with six male, strong officers, and three nurses, and there is nothing you can do."

Otieno, who used a pseudonym, was released from detention in late 2020. He lost 28 pounds and takes medication for post-traumatic stress disorder, according to the report.

Reports of hunger strikes by detainees went up since the start of the pandemic, Wednesday's report says. Last June, dozens of people at Mesa Verde ICE Processing Facility in California declared a hunger strike demanding protection from Covid-19 and expressing solidarity with the Black Lives Matter movement in the wake of the killing of George Floyd.

Joe Mejia went on hunger strike with other detained immigrants for five days because of poor conditions and lack of Covid-19 precautions, the report said.

"No one wants to starve, to feel their intestines move inside their body because of hunger ... The housing, conditions, clothing, food, hygiene -- they try to make individuals in ICE detention miserable," he said, according to an interview cited in the report.

Wednesday's report also found that outside facilities were at times unwilling to perform forced feeding, citing an incident in Colorado, where some facilities said they likely wouldn't assist in force feeding those on hunger strike at the Aurora Detention Center in the event of a court order.

On Friday, ICE said in a follow-up statement that "the individuals taking part in hunger strikes at Aurora did not continue in their protest to a point where any court ordered intervention was necessary," adding that no force feeding happened in that instance.

The American Medical Association has previously condemned force feeding as a violation of "core ethical values of the medical profession."

"What we want people to know is that people go on hunger strike because something is happening on the inside," José Tapate, who was held in immigration detention and went on a hunger strike over poor food and medical care, told the authors of the report. "There are so many things happening behind closed doors that people are not aware of."

Tapate was eventually released because of Covid-19-related litigation.

This story was updated Friday with a response from ICE on the Aurora Detention Center.