Despite the state of things, there will be a turkey pardon 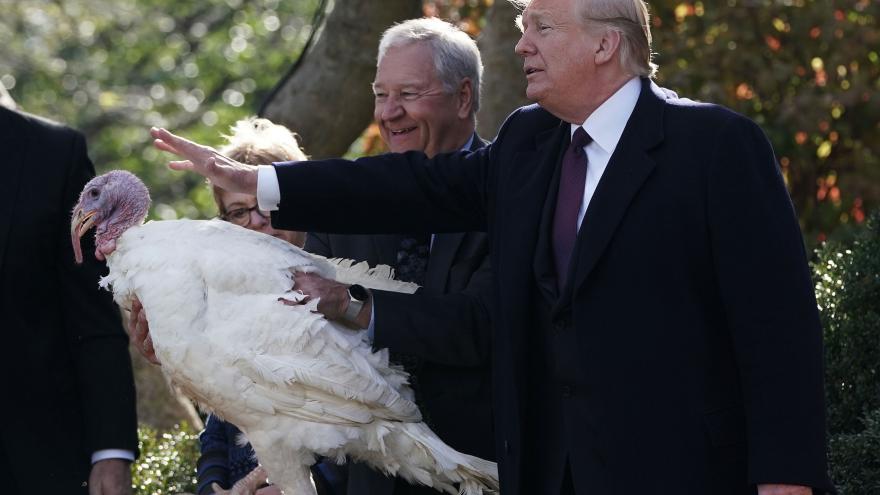 (CNN) -- America is at an unsettling moment, with a resurgent pandemic and a president who refuses to accept the results of a national election. Most schoolchildren remain out of the classroom, people are working from their living rooms, restaurants are half-empty, social gatherings largely scaled back.

Yet one tradition will continue as planned: The President of the United States will pardon the annual Thanksgiving turkey at the White House on Tuesday, according to a White House official. In a 2020 riddled with disappointments and disaster, the news Wednesday that the annual pardon will go on, is somehow both comforting and unsettling, and sure to ruffle some feathers.

President Donald Trump has not had a public event on his schedule in 11 days. He's made just four official appearances since November 3, and he's only spoken publicly twice. With exception of golf on the weekends, and a visit to Arlington National Cemetery on Veteran's Day, he has not left the White House.

He spends his mornings watching TV in the executive residence, meanders to the Oval Office for the rest of the day, and returns "home" in the evenings. Save daily Twitter outbursts and the occasional firing of a senior administration official, he hasn't done a whole lot of the normal presidential work.

What he has managed is to hold up a democratic process essential to the smooth transition from one president to the next.

This month, there have been no diplomatic engagements for the President, no major meetings with world leaders or heads of state, no steady stream of congressional heavyweights, nor Cabinet meetings. But the turkeys, as yet unnamed, will get face time with the leader of the free world, and perhaps the first of more lame duck grants of clemency to come.

The birds have already been selected -- they were raised by the National Turkey Foundation's chairman and Iowa turkey farmer Ron Kardel, according to a tweet by the federation. Official Thanksgiving turkeys have been gifted to the White House by the poultry industry since 1947, though some date the "pardoning" of the turkey as far back as President Abraham Lincoln.

Next week, this year's birds will travel aboard the gravy train to Washington to stay at the Willard Hotel, blocks from the White House, and become two rare visitors these days to 1600 Pennsylvania Avenue. It's unclear whether they will abide by the mandatory three-day quarantine and test required by the Washington, DC, mayor.

Trump has appeared to enjoy the last three turkey pardons he has conducted, specifically the birds themselves. Last year, he called turkeys Bread and Butter members of "the noble turkey" family, "beauties" and when one gobbled, interrupting his remarks, Trump marveled: "Wow. That's a strong bird."

He riffed, off-script, as he often does while delivering remarks, noting from the Rose Garden, he could see his for-now office.

"That's the Oval Office," Trump gestured to the guests. "Some of you haven't been here before. But every time we walk onto the grounds of the White House, we realize how special it is."

Back in 2018, as he chose between birds Peas and Carrots, Trump said the vote was decided by a "fair and open election." But he teased that Carrots refused to concede and demanded a recount, although that didn't change the outcome.

"That's too bad for Carrots," Trump said, ironic this time around given his campaign's current baseless efforts to contest election results.

While he may not be making time for the business of our democracy, Trump has always loved the pomp and circumstance of formal events at the White House, even those that require a bed of sawdust and the risk of being pecked by a 45-pound turkey. This year will mark the 73rd year of the pardoning, and whether Trump finally admits it, it will indeed be the last of this presidency.

The turkeys will fly the coop too, off to retirement at "Gobbler's Rest" in Blacksburg, Virginia. They won't be plucked, stuffed and cooked -- even the one that didn't get the pardon. They'll live on -- the entire pardoning an exercise in story-telling, an enduring farce.