Despite 14 stitches and a black eye, Jimmy Carter is back building homes 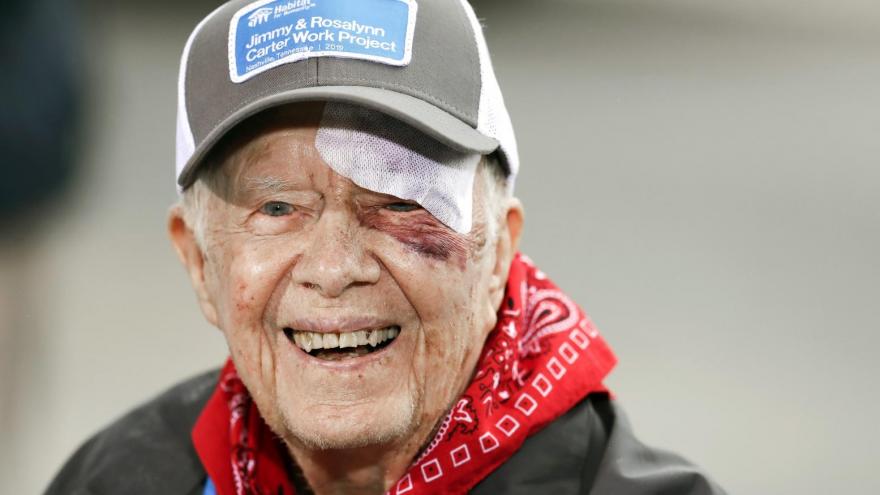 Fourteen stitches, a black eye and a large bandage are no match for former President Jimmy Carter, who turned 95 last week.

(CNN) -- Fourteen stitches, a black eye and a large bandage are no match for former President Jimmy Carter, who turned 95 last week. Just hours after suffering injuries from a fall in his home Sunday morning, Carter traveled to Nashville to kick off a week of volunteer work.

Despite his injuries, the oldest living former US president and his wife Rosalynn Carter have been working on building the new porches of 21 Nashville homes this week as part of the 36th Jimmy and Rosalynn Carter Work Project with Habitat for Humanity.

Carter's injuries were visible to the audience during an appearance Sunday night. Under an Atlanta Braves baseball hat, the humanitarian leader's left eye was partially covered by a gauze bandage. Underneath the eye, purple and red swelling stretched across his cheekbone.

Gripping the podium, Carter began his address by acknowledging his fall while getting ready to go to church on Sunday morning.

"I fell down and hit my forehead on a sharp edge and had to go to the hospital. And they took 14 stitches in my forehead and my eye is black, as you've noticed," he said. "But I had a No. 1 priority and that was to come to Nashville and build houses."

The funds raised by the Carter Work Project will allow an additional 12 new single-family homes and 26 new townhomes to be built by the nonprofit by 2021.

The couple has been volunteering with Habitat for Humanity for 35 years, building homes all over the United States and around the world. They have worked alongside 103,000 volunteers in 14 countries, including India, South Korea and the Philippines.