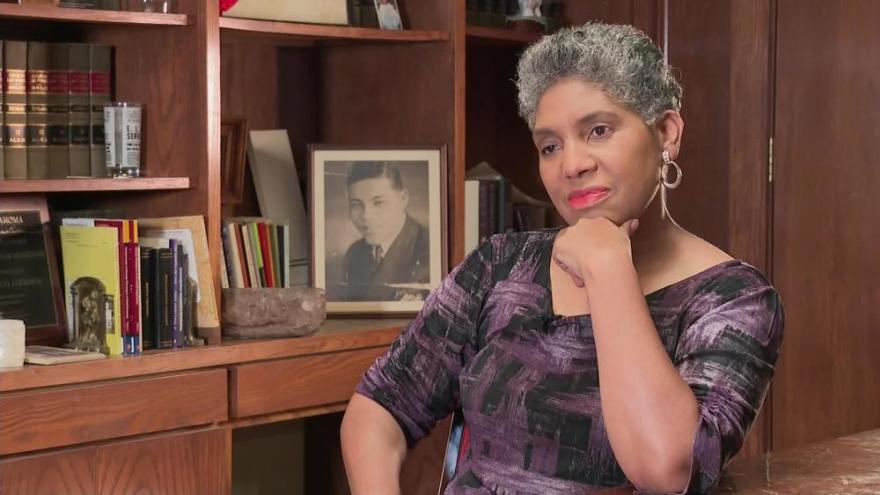 Oklahoma state Rep. Regina Goodwin's great grandfather was a businessman in Greenwood at the time of Tulsa's 1921 race massacre, she seeks justice as the nation confronts a racist past.

Vernon sits atop the only structure still standing after the 1921 race massacre left the once-prosperous black district burned to the ground and hundreds if not thousands of its residents homeless or dead.

The weight of that legacy weighs heavily on Vernon A.M.E. always -- but especially in recent weeks, as the city marked 99 years since the massacre, an anniversary that came at a time of protests and upheaval nationwide over the killing of George Floyd in police custody.

As the city prepared to mark the anniversary of the massacre at the end of May, protesters in Tulsa took to the streets against racism and police brutality. Some businesses were damaged and fires were set. And now, the community is bracing itself again, as President Donald Trump is expected to bring thousands of his supporters to the city for the first campaign rally since March.

Tulsa's black residents say that it is impossible to disentangle what happened to their ancestors in Greenwood from the broader national conversation about the impact of racism on black Americans today. They have spent decades seeking justice that they still have not received, and they say that there is still a reluctance -- especially among white residents of the city and the state -- to fully acknowledge the events of 1921.

On a recent Sunday morning, the sanctuary of Vernon A.M.E., which was rebuilt by hand by survivors of the massacre, is virtually empty -- a dozen or so in-person attendees are spread out, socially distanced among the pews. As much of the rest of Tulsa eagerly reopens, this church's doors are open cautiously -- they are keenly aware of the disproportionate toll that the virus has taken on black Americans across the country.

That Vernon is still standing is both a source of pride and a symbol of all that has been lost.

In the years before the massacre, Greenwood was known in the early 1920's as Black Wall Street -- a beacon of black prosperity in the nation. Greenwood boasted more than 300 black-owned businesses, according to Mechelle Brown, a program coordinator at the Greenwood Cultural Center.

With doctor's offices, hospitals, lawyers, shops and newspapers, it was virtually self-sustainable and distinct from white Tulsa, south of the train tracks. Mary E. Jones Parrish, a black woman who gave a written, first-hand account of the massacre, called it "a city within a city."

The success and wealth of this black community, however, made poor white people in the neighboring areas envious and resentful, Brown and historians say.

Tensions boiled over when a white woman named Sarah Page accused a black man named Dick Rowland of assaulting her in an elevator. Page worked as the elevator operator, and Rowland would frequently use the elevator because he had been given special permission to use the restroom and drink water in the building, Brown said.

Rowland was arrested, and soon there was a rumor spreading that Page had been raped, according to Brown. An angry white mob showed up at the jail with the intent to lynch Rowland.

Outside of the jail, there was a struggle over a gun and shots went off, according to Brown. Chaos ensued, and by the early morning hours of June 1, 1921, the white mob started to loot and set everything in Greenwood on fire.

"The mob looted those homes before they set them on fire, so the tension was the jealousy over material wealth that African Americans had that poor whites did not have," said John W. Franklin, Cultural Historian Emeritus at the Smithsonian Institution's National Museum of African American History and Culture. Franklin's grandfather was a lawyer in Greenwood at the time, and survived the massacre but had all of his belongings looted.

Franklin said there were airplanes that dropped turpentine bombs on the community. He said it is still unclear who the planes belonged to or who the pilots were, but said it was the first time a US community was bombed from the air.

"You would either stay in your house and burn to death or try to run out in the street and hope not to be felled by bullet," said Oklahoma state Rep. Regina Goodwin, whose great grandfather, a leading businessman in Greenwood at the time of the massacre, was able to survive. "That that was the decision that folks had to make."

In the aftermath of the killing, local white officials put the estimates of the dead at just a few dozen. But historians, bolstered by eyewitness and descendant accounts, estimate as many as 300 people died and about 35 city blocks were burned to the ground. More than 10,000 African Americans were left homeless, according to the Greenwood Cultural Center, and more than 2,000 business were destroyed. Franklin said his grandfather was one of the thousands of African Americans rounded up and detained for several days after the massacre.

"There's no real way of knowing how many of those people actually escaped and never returned to Greenwood, and how many of those people were murdered and discarded in mass grave sites," Brown said. She said after an upcoming investigation into potential mass grave sites, "I think we will find that there were many more than 300 people that were murdered."

'No one was ever accused, charged, convicted'

Goodwin told CNN that although the massacre wasn't openly talked about or taught in schools in Tulsa for decades, the oral history of the massacre has been passed down through generations of her family.

African Americans for years were afraid of speaking about the massacre for fear of retaliation, she said. Despite the hundreds of deaths and millions of dollars in damage, Goodwin said, "No one was ever accused, charged, convicted."

Goodwin criticized President Donald Trump's decision to hold a campaign rally in Tulsa. The rally was initially scheduled to be on Juneteenth, the day commemorating the end of slavery in the United States, but the timing and location drew heavy criticism from African American leaders and Democrats, given Tulsa's history of racial violence. Trump bowed to pressure and moved the rally, which will be his first in months, back by one day.

But Trump has also faced criticism for his reluctance to address racism in America head on. He has suggested that a strong economy is the solution to systemic racism.

"What's been happening, is the greatest thing that could happen for race relations, for the African American community," Trump said in the Oval Officer this month when asked what his plan is for addressing systemic racism. "That's what my plan is, we're going to have the strongest economy in the world."

With the world's eyes on Tulsa, Goodwin says the massacre shows that economic prosperity alone cannot drive out prejudice.

"You had wealthy folks in Tulsa at the time," said Goodwin. "They were men of industry. They had great minds, and they were run out of town. Matter of fact, they were charged with inciting a riot.

"So their wealth did not protect them from racism. Nor would anyone's wealth today," she added.

What remains of Greenwood today is very little, though for years residents here have fought to preserve and correct the history that has been told about the massacre. In the years after the massacre, Greenwood's black residents rebuilt -- but never to its past splendor.

Today, it is a fraction of its former size and the wealth that characterized Greenwood then is virtually gone.

"The white mob really won, because they weren't just trying to kill people, they were trying to divest us from land," Turner told CNN. "And even though we rebuilt after the massacre, if they could see what Greenwood is today they'll be pleased, because they took it out of the hands of black people."

Turner said the African Americans attacked and killed by the white mob never received justice, and blamed the city for not doing enough to stop the massacre.

Of Trump's upcoming visit to Tulsa, Turner said he hopes that Trump supports reparations for the descendants and institutions that were destroyed in 1921.

The damages at the time came out to more than $2.7 million, according to Brown, which would be more than $39 million today, according to the US Bureau of Labor Statistics' CPI Inflation Calculator.

Turner said he hopes Trump "sees this area as the crime scene it still is, because not one person was ever charged with a crime from the worst race massacre in American history."

The oldest cemetery in Tulsa sits adjacent to a busy highway. In the shadow of that highway, Chief Egunwale Amusan has spent years searching for the remains of hundreds of black Tulsa residents who were massacred in 1921.

"Before this highway was built, this was a one-way rail system. The witness said that his grandfather took him up to the tracks and told him that during the massacre they brought in rail flats right here where this road goes down the middle of Oaklawn Cemetery, they built a trench, they dug a trench and dumped bodies down into the trenches," Amusan said. "He said there had to have been an excess of 300 bodies in that one location alone."

There are only two headstones where the date of the massacre is inscribed, in what is referred to as the Potter's Field, a burial place for the poor.

A few feet away, a large rectangle has been fenced off marking an area where researchers believe remains of other victims might be found.

In 2018, Tulsa Mayor G.T. Bynum, a Republican, announced that he would reopen the investigation into mass graves, calling it a murder investigation.

This year, they had planned to excavate in that area to search for "anomalies" that could indicate that human remains might be found. But because of the coronavirus, those plans are on hold indefinitely.

"Our goal is to retrieve those bodies," Amusan said. "The mayor has called it a crime scene so we want it thoroughly investigated."

Amusan said that before there can be true reconciliation, there must be an acknowledgment of the totality of what was taken from black Tulsans nearly 100 years ago.

"We were building it in Greenwood," he said. "So to have someone to strip that from you it leaves you with a deep responsibility."