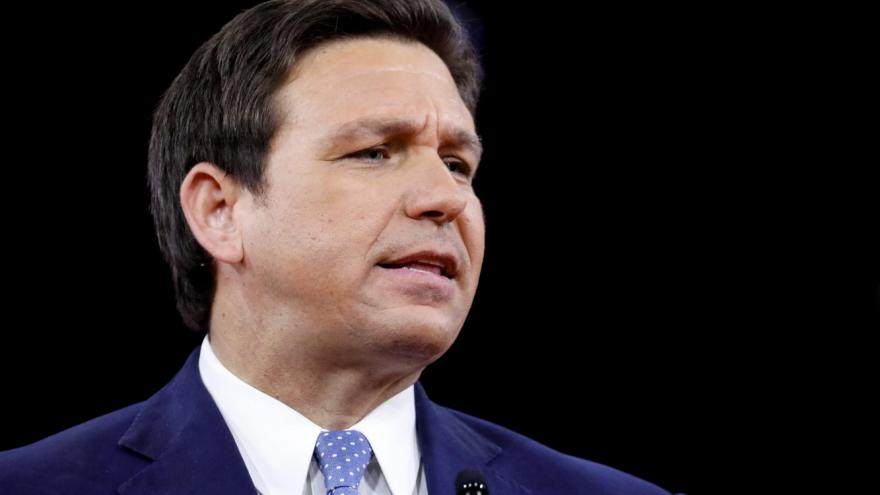 Florida Gov. Ron DeSantis on Friday signed several bills into law, including two measures into law targeting Disney, legislation that will put new restrictions on how schools and businesses can talk about race and gender, and the state's new congressional map. DeSantis is shown here at the Conservative Political Action Conference (CPAC) in Orlando, Florida, U.S. February 24, 2022.

(CNN) -- Florida Gov. Ron DeSantis on Friday signed several bills into law, including two measures targeting Disney, legislation that will put new restrictions on how schools and businesses can talk about race and gender, and the state's new congressional map.

The bills targeting Disney were passed by the state's Republican-controlled legislature this week in a special session, taking aim at the company's self-governing status around its Orlando-area theme parks and ending an exemption to state law regarding Big Tech censorship.

Florida lawmakers also this week passed the state's new congressional map, which was proposed by DeSantis himself and that critics say dilutes the electoral power of Black Floridians and could give Republicans the advantage in as many as 20 of the state's 28 districts.

The bill restricting how schools and businesses can talk about race and gender was passed by lawmakers last month. It says a student and employee cannot be told they "must feel guilt, anguish, or other forms of psychological distress because of actions, in which the individual played no part, committed in the past by other members of the same race, color, sex, or national origin."

One of the bills signed by DeSantis unravels the nearly 55-year-old Reedy Creek Improvement Act, a unique Florida law that helped establish Walt Disney World in the state by giving the brains behind Mickey Mouse operational autonomy.

Another bill signed by DeSantis subjects Disney to a state law that allows people to sue Big Tech companies for censorship after Disney won an exemption from it last year. A federal judge has blocked the law, but Florida is appealing the ruling.

The pair of bills represent an unprecedented political retaliation against Disney for its criticism of the Parental Rights in Education bill, which critics have termed the "Don't Say Gay" bill.

Disney has not responded to CNN requests for comment.

Florida Democrats have been outspoken against the bills, accusing Republicans of retaliating against the state's largest private employer in ways that will reverberate throughout the Sunshine State's important tourism economy.

The map signed by DeSantis could help Republicans gain up to four seats in the US House of Representatives this November.

It dismantles Florida's 5th Congressional District, currently represented by Democrat Al Lawson, which connects Black communities from Tallahassee to Jacksonville. Instead, Jacksonville, the city with the largest African American population in the state, is divided into two Republican-leaning districts.

DeSantis has contended those districts were racially gerrymandered and has suggested they are unconstitutional.

A coalition of civil rights groups on Friday filed the first lawsuit against the new map, contending it was a Republican gerrymander that violated the state Constitution by diminishing the power of Black voters. A state constitutional amendment known as Fair Districts, approved by voters in 2010, requires lawmakers to give minority communities an opportunity to "elect representatives of their choice."

Several Black members of the Florida House staged a protest during debate Thursday, forcing an informal recess before Republican members continued the process by ending debate and holding the vote during their protest.

The Republican-controlled state House and Senate had initially sought to maintain the state's four Black congressional districts. DeSantis threatened to veto those proposals.

DeSantis' foray into the once-a-decade redistricting process is unusual. None of his immediate predecessors were especially involved in reapportioning state boundaries. It was a surprise to Tallahassee, including Republicans, when the governor's office in January submitted a map for the lawmakers to consider.

Republicans currently hold a 16-11 advantage in Florida's US House delegation. The state added a 28th district following the 2020 US census.

New law limits how race can be discussed in classrooms

In signing the bill that will put new restrictions on how schools and businesses can talk about race and gender, DeSantis realized one of his top objectives heading into his reelection campaign. In December, he had proposed the Stop the Wrongs to Our Kids and Employees (W.O.K.E.) Act to remove certain teachings about race from school curricula and employee trainings. Specifically, DeSantis called for a banning of critical race theory and similar concepts.

That proposal became the legislative framework for HB 7, which passed the Republican-controlled legislature earlier this year.

The legislation DeSantis signed does not specifically mention critical race theory, which acknowledges that racism is both systemic and institutional in American society and has benefited White people and oppressed Black and brown Americans. A bill analysis by state Senate staff, however, highlights the teaching of critical race theory as something that would be prohibited under the legislation.

The newly signed legislation was swiftly challenged in a federal lawsuit filed on Friday that argues the law violates First Amendment and 14th Amendment rights and seeks an injunction to stop it from going into effect.

Attorneys for the plaintiffs in the suit -- an upcoming kindergarten student, two Florida teachers, a University of Central Florida associate professor, and a race and ethnicity consultant -- said, "This legislation prohibits Florida's K-12 schoolteachers, college and university professors, and employers from espousing, endorsing, or advancing a wide range of viewpoints on important issues about race in America, such as institutional racism and implicit bias," in a news release shared with CNN on Friday.

A spokesperson for the governor told CNN they have not had a chance to review the lawsuit yet but are confident the bill is legal.

"The law protects students and workers from discriminatory indoctrination. Nobody should be compelled to undergo trainings or lectures that stereotype individuals based on race or other innate characteristics," said Christina Pushaw, DeSantis' spokesperson.

"No one is teaching critical race theory," state Sen. Audrey Gibson, a Black Democrat from Jacksonville, said the day the bill passed in that chamber. "This is a bill in search of a problem that we don't have."

"This is politically driven," she added. "This is designed to create division."

Democratic lawmakers have expressed concern that such a law could lead to schools desensitizing history, including the Jim Crow era, the internment of Japanese Americans during World War II and the Stonewall riots.

The bill DeSantis signed says schools can teach about slavery and the history of racial segregation and discrimination in an "age-appropriate manner," but the instruction cannot "indoctrinate or persuade students to a particular point of view."

The new law also says that students "shall develop an understanding of the ramifications of prejudice, racism, and stereotyping on individual freedoms, and examine what it means to be a responsible and respectful person" and "celebrate the inspirational stories of African Americans who prospered, even in the most difficult circumstances."

The law is set to go into effect on July 1.