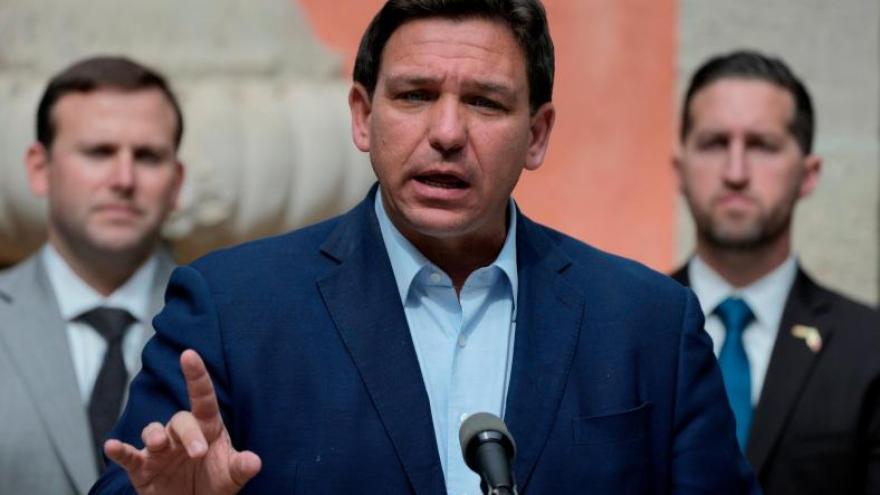 Florida Gov. Ron DeSantis signed into law on Thursday a Mississippi-style anti-abortion measure that bans the procedure after 15 weeks of pregnancy without exemptions for rape, incest or human trafficking. DeSantis is shown here during a news conference on February 1, 2022, in Miami.

(CNN) -- Florida Gov. Ron DeSantis signed into law on Thursday a Mississippi-style anti-abortion measure that bans the procedure after 15 weeks of pregnancy without exemptions for rape, incest or human trafficking.

The bill, which goes into effect July 1, does allow exemptions in cases where a pregnancy is "serious risk" to the mother or a fatal fetal abnormality is detected if two physicians confirm the diagnosis in writing.

The bill makes Florida the latest Republican-led state to advance a 15-week abortion ban bill this session. Additionally, the Kentucky legislature on Wednesday overrode Democratic Gov. Andy Beshear's veto of a broad abortion bill that bans most abortions after 15 weeks of pregnancy. And in Oklahoma, Republican Gov. Kevin Stitt on Tuesday signed a bill into law that makes performing an abortion illegal in the state, with an exception only in the case of a medical emergency.

The US Supreme Court appears poised to uphold the Mississippi law that bars abortion after 15 weeks. The fate of Roe v. Wade, the landmark 1973 Supreme Court decision that legalized abortion nationwide, also hangs in the balance, and anti-abortion activists are hopeful that the court's conservative majority will strike it down.

Previously, Florida had allowed abortion through the second trimester of a pregnancy, making it one of the most permissive states for abortion in the southeast. Abortion advocates said many women from neighboring states often traveled to Florida for the procedure, meaning changes to Florida's law could be felt all throughout the region.

According to the US Centers for Disease Control and Prevention, Florida reported 71,914 abortions in 2019, or 18.5 per 1,000 women, the third highest rate in the country.

"We are here today to defend those who can't defend themselves," DeSantis said Thursday on a stage surrounded by several female lawmakers, anti-abortion advocates and children. "This will represent the most significant protections for life that we have seen in a generation."

The signing of the bill comes days after a Tallahassee circuit court judge ruled that Florida can require a 24-hour waiting period to get an abortion, ending a seven-year legal battle over another contentious anti-abortion measure.

The state Senate passed the bill 23-15 on March 15 over the objections of Democrats, who shared painful and emotional stories of women who elected to have an abortion after a trauma. State Sen. Lauren Book, a Plantation Democrat and the leader of the minority party, told colleagues she was a victim of rape and implored lawmakers to include an exemption for women who become pregnant as a result of sexual violence.

Book broke down into tears after the proposed amendment was rejected by Republicans, who have a majority in the chamber.