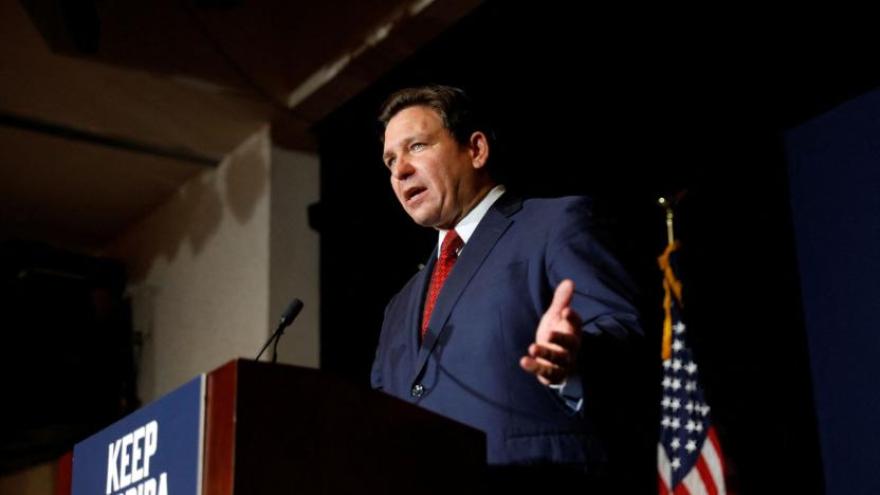 Florida Gov. Ron DeSantis speaks after the state's primary elections in Tampa on August 24. Ron DeSantis has thrust Florida into an escalating battle between red state leaders and the Biden administration over the US-Mexico border.

(CNN) -- By arranging to fly two planes of migrants onto the tony island of Martha's Vineyard on Wednesday, Gov. Ron DeSantis has thrust Florida into an escalating battle between red state leaders and the Biden administration over the US-Mexico border and once again put himself at the forefront of a political cause that is animating Republican voters two months before the midterm elections.

For months, DeSantis has been plotting out loud his plans to get Florida involved in redirecting migrants from the border in a way that would maximize heartburn for Democratic leaders. His administration secured $12 million in the state budget to pay for migrant relocation and he has repeatedly threatened to use the money to send them to President Joe Biden's home state of Delaware, among other liberal strongholds.

When he laid out his immigration agenda at a December news conference, DeSantis teased Martha's Vineyard as a potential destination, saying, "It's somewhat tongue-in-cheek but it is true, if you sent to Delaware or Martha's Vineyard or some of these places, the border would be secure the next day." And last month, DeSantis telegraphed that Florida's involvement in moving migrants might start at the southern border, not with people who had arrived in his state.

"We do have money to be able to do (that), but that's from people from the southern border, that's not going in the interior of Florida," DeSantis said at an August press conference.

Still, as the maneuver played out in real time -- with jarring images of an estimated 50 people, some who fled a brutal South American dictatorship, wandering an unfamiliar Northeastern vacation spot unprepared for their arrival -- it sent shockwaves through Florida and Massachusetts and rattled those left to deal with the fallout. And it served to put the country on notice that the reach of DeSantis, a hard-charging Republican leader who is weighing a campaign for president in 2024, already extends well beyond his state's boundaries.

"All those people in DC, and New York were beating their chests when (Donald) Trump was president, saying they were so proud to be sanctuary jurisdictions saying how bad it was to have a secure border," DeSantis said at a news conference Thursday morning. "The minute even a small fraction of what those border towns deal with every day is brought to their front door, they all of a sudden go berserk."

"It just shows you...their virtue signaling is a fraud," said DeSantis, who's running for a second term in November.

In Massachusetts, where local officials scrambled to find accommodations for the migrants, Democratic leaders accused the Republican governor of orchestrating a political stunt with human lives.

"Think about the governor of Florida, one of the largest states in the nation, spending his time hatching a secret plot to ship up 50 immigrants here, families, some of them children as young as four, and use them as political pawns just so he can get on Tucker Carlson and beat his chest about how he's tough on immigration," Massachusetts state Rep. Dylan Fernandes, a Democrat, said Thursday morning on CNN.

"He is a coward, and the real story is the island community that has rallied to come together and support these people -- they represent the best of what America has to offer."

In Florida, the Democratic Party Chairman Manny Diaz called it "a new low" for the Florida governor. Democratic gubernatorial nominee Charlie Crist said, "Everything Ron DeSantis does is to score political points with his hard right base in a thinly veiled attempt to run for President -- but it's Floridians who pay the price."

This is not the first time DeSantis has waded into the country's divisive immigration debate in a way that has maximized exposure for the Republican governor while costing taxpayers. In June of last year, DeSantis sent law enforcement to the southern border, insisting he had "answered the call" for help from Govs. Greg Abbott of Texas and Doug Ducey of Arizona. A month later, DeSantis visited the border to hold a news conference with Abbott, and he paired it with a fundraising pitch to his supporters.

Those actions earned DeSantis considerable praise from conservative commentators and didn't noticably hurt his political standing in his state, where one in five residents identified themselves as Hispanic or Latino. It remains to be seen if immigrant and Spanish-speaking communities will respond more negatively to DeSantis sending migrants, who were legally processed at the border, 2,000 miles to Massachusetts.

Many of those on the planes to Martha's Vineyard said their country of origin was Venezuela, where millions of people are fleeing the oppressive regime of Nicolás Maduro. More than half the Venezuelans in the country are in Florida, according to a 2020 Migration Policy Institute report, with 109,000 just in the Miami metropolitan area. Political observers in Florida have noted the Venezuelan community's growing political clout in a state that is often won on the margins.

"We are here today to tell the Governor that no Hispanic, no immigrant, but in this case we, Venezuelans, are not pieces on his political boardgame to get headlines and to get political points in his quest to become the Republican nominee for the 2024 Presidential Election," said Adelys Ferro, director of the Venezuelan American Caucus, at a news conference Thursday in South Florida.

It is not clear if DeSantis and Abbott are coordinating efforts at the border, or competing. Abbot has bussed thousands of migrants to Democratic cities in recent weeks. The morning after the two planes landed in Martha's Vineyard, buses from Texas dropped off migrants outside the Naval Observatory in Washington, DC, where Vice President Kamala Harris resides.

Like DeSantis, Abbott is running for reelection this year and is also a possible contender for the Republican presidential nomination in 2024. Earlier this summer, DeSantis was critical of Texas' response to the surge of migrants at the border, suggesting the Lone Star State shouldn't be letting them cross over to the US in the first place.

"What they need to do, Texas, should just send them back across the border," DeSantis said in June. "You know, who cares what the feds are saying they're not doing their job. Or not let them come across the border to begin with because they go right across the river. They just walk right across. No one's stopping. So you know, some pushback I think would be good."

DeSantis has also been recruiting more Republicans to join his hardline approach to border migration. In a widely followed speech in Arizona last month where he campaigned for Kari Lake, the Republican nominee for governor there, DeSantis hinted at more collaboration to come if she is elected.

"What I've told Kari Lake, I said, 'Look, if you're willing to put people on that border and keep them from coming in to begin with, I'll send National Guard to help with that," DeSantis said.