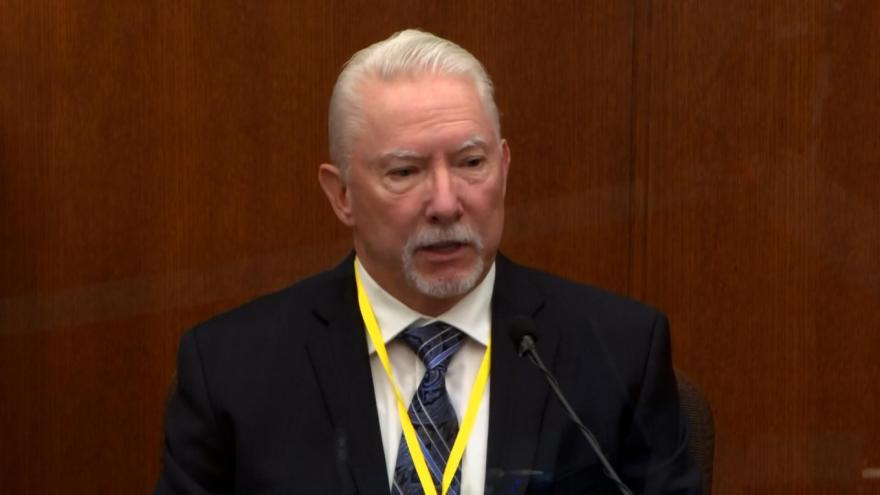 Barry Brodd testified on April 13 that Derek Chauvin "was acting with objective reasonableness."

"In my opinion, Mr. Floyd had a sudden cardiac arrhythmia, or cardiac arrhythmia, due to his atherosclerosis and hypertensive heart disease ... during his restraint and subdual by the police," said Dr. David Fowler, a forensic pathologist who retired as Maryland's chief medical examiner at the end of 2019.

Floyd had narrowed coronary arteries, known as atherosclerosis, and an enlarged heart due to his high blood pressure, or hypertension, Fowler said. Floyd's fentanyl and methamphetamine use and a tumor known as a paraganglioma were other significant conditions that contributed to his death, he said.

Dr. Fowler also put forth a novel argument that carbon monoxide from the squad car's exhaust may have contributed to his death.

But in cross-examination, he conceded that he did not have any data or test results to support the theory and that there was no finding of injury due to carbon monoxide. When asked how he knew the vehicle was even on, Fowler said he noted water was dripping from the tail pipe, which indicated to him it was running.

Dr. Fowler says he ruled out asphyxia in Floyd's death.

"Positional asphyxia, as the term is used in court today, is an interesting hypothesis and unsupported by any experimental data," he testified.

In all, Dr. Fowler said Floyd's death should have been classified as "undetermined," rather than a homicide, because there were so many competing causes.

The testimony cuts at the prosecution's argument, bolstered by five separate medical experts, that Floyd's primary cause of death was low oxygen due to Chauvin's restraint of a handcuffed Floyd in the prone position -- known as "positional asphyxia." To get a guilty verdict, prosecutors have to prove that Chauvin's actions were a "substantial causal factor" in Floyd's death.

Dr. Fowler's analysis took up the entirety of Wednesday's testimony. A day earlier, six witnesses testified for the defense, including a use-of-force expert said Chauvin's actions were justified. Several other witness testimonies focused on Floyd's drug use, particularly during a prior arrest in May 2019.

The prosecution rested its case Tuesday morning after calling 38 witnesses over 11 days. Prosecutors sought to prove that Chauvin used excessive and unreasonable force when he kneeled on Floyd's neck and back for nine minutes and 29 seconds last May. Their case relied heavily on multiple videos of Chauvin's actions, analysis by policing experts and medical testimony as to how Floyd died.

Chauvin, 45, has pleaded not guilty to second-degree unintentional murder, third-degree murder and second-degree manslaughter charges. The defense's case is expected to last only a few days, and closing arguments are expected for Monday, Judge Peter Cahill said.

While the trial has focused in on Chauvin and Floyd, the broader societal stakes were made clear this week when a police officer shot and killed a Black man in nearby Brooklyn Center, sparking three nights of protests. The officer resigned and was arrested and charged with second-degree manslaughter, authorities said. The Floyd family has offered their condolences and support to the family of 20-year-old Daunte Wright.

"We're here and we will fight for justice for his family, just like we're fighting for our brother," Philonise Floyd said Tuesday.

Last week, Dr. Martin Tobin, a pulmonologist, testified for the prosecution that Chauvin's actions narrowed Floyd's hypopharynx, a part of the throat that air passes through. Dr. Fowler said he watched that testimony and went to search for more information but found none. "It's not something I have ever heard of," he said.

He also conceded he is not a pulmonologist and did not try to calculate how much air was in Floyd's lungs between breaths -- a key part of Dr. Tobin's analysis.

Dr. Fowler was unable to identify the point at which Floyd suffered his sudden cardiac arrest, and he said he did not notice that Floyd's voice grew thicker and quieter as time went on. He also said he agreed that Floyd should have been given immediate medical attention on scene.

The doctor's analysis contradicted much of what the prosecution's experts said last week.

Hennepin County Medical Examiner Dr. Andrew Baker, who conducted Floyd's autopsy, testified last week that the police restraint was the primary cause of death, and he listed Floyd's heart disease and fentanyl use as other significant conditions.

He described the paraganglioma as an "incidental" tumor that didn't have anything to do with his death. None of the doctors mentioned carbon monoxide as having any role.

Dr. Jonathan Rich, a cardiologist who testified for the prosecution on Monday, said Floyd's heart showed no evidence of injury at all.

Fowler is being sued over 'eerily similar' death of Maryland teen

Separately, Dr. Fowler is named in a lawsuit by the family of a Maryland teenager who died during a 2018 police encounter which a family attorney called "eerily similar" to Floyd's death.

Anton Black died after an altercation with Greensboro, Maryland, police officers in which he was held down while lying in a prone position for about six minutes, according to the lawsuit.

At issue in the lawsuit are claims that Dr. Fowler and other members of the Office of the Medical Examiner "covered up and obscured police responsibility for Anton Black's death." The lawsuit alleges that Fowler and others intentionally withheld toxicology results that contradicted police claims of drug use and falsely attributed the cause of death to other causes.

Black's medical examination report, signed by Dr. Fowler, found no evidence "that restraint by law enforcement directly caused or significantly contributed to the decedent's death" and suggested "the manner of death is best certified as accident."

No charges were filed against the police officers involved in the incident.

Attorney Kenneth Ravenell, who represents Black's family in the lawsuit, told CNN he was "flabbergasted" when he first learned that Dr. Fowler would be testifying in the Chauvin trial.

"We were initially surprised that Dr. Fowler would be testifying, particularly since he's a defendant in a case that's eerily similar," Ravenell said. "He's a hired gun."

The lawsuit has not been mentioned by attorneys for either side in the Chauvin trial.

Attorneys for Dr. Fowler had no comment, citing ongoing litigation. Earlier this month, a motion to dismiss the case was filed on the basis that Dr. Fowler and other defendants have "qualified immunity," and specifically that because Dr. Fowler is retired from the Medical Examiner's Office, he "has no power to effect the changes" sought by the plaintiffs.

CNN has reached out to Greensboro Police.