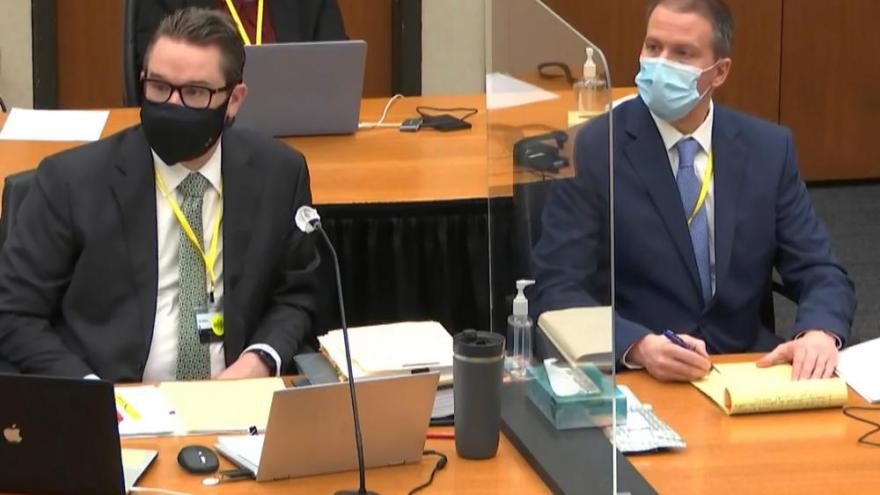 (CNN) -- The special agent who led the Minnesota Bureau of Criminal Apprehension investigation into George Floyd's death struggled to make sense of a short phrase Floyd said last May as Derek Chauvin kneeled on him.

Senior Special Agent James Reyerson was shown a clip from Minneapolis Police body-camera footage of Floyd saying something while handcuffed and in a prone position on the ground.

"Did it appear that Mr. Floyd said, 'I ate too many drugs?" defense attorney Eric Nelson asked Reyerson.

After a short break, the prosecution played for Reyerson a longer clip of the video that provided the lead up to that comment.

"Having heard it in context, are you able to tell what Mr. Floyd is saying there?" prosecutor Matthew Frank asked.

"Yes, I believe Mr. Floyd was saying, 'I ain't do no drugs," Reyerson replied.

The testimony came on the eighth day of Chauvin's criminal trial as several investigators and forensic scientists testified about what they found at the crime scene, including Floyd's blood stains and a few white pills containing fentanyl and methamphetamine.

Earlier in the day, a Los Angeles Police Department use-of-force expert hired by the prosecution testified that Chauvin had used excessive and deadly force on Floyd when none was needed.

Throughout the trial jurors have been closely watching and at various points taken notes on much of the testimony, according to pool reports from inside the courtroom. However, the pool reports indicate that some jurors' attention flagged during the BCA investigators' testimony on Wednesday.

This week's testimony has featured several police training experts who have countered the defense's argument that Chauvin "did exactly what he had been trained to do" when he restrained Floyd. Prosecutors have sought to show Chauvin used excessive and unreasonable force on Floyd and had a "depraved mind" without regard for human life.

The focus on police policy and training comes after a first week of testimony centered on what happened to Floyd on his last day. The evidence included cellphones, surveillance cameras and police body cameras; testimony from distressed bystanders; descriptions from paramedics and police supervisors who responded to the scene; and Chauvin's own statements about what happened.

The trial, now in its second full week of testimony, is expected to last about a month.

The LAPD use-of-force expert testified Wednesday that Chauvin used "deadly force" by holding his knee on Floyd's neck and back for more than 9 minutes in a situation where no force was necessary.

LAPD Sgt. Jody Stiger, in his second day on the stand, said the pressure of Chauvin's body weight on the back of Floyd's neck could have caused potentially lethal "positional asphyxia."

Stiger testified the dangers of positional asphyxia have been known in law enforcement for at least 20 years.

He told the jury that "no force should have been used," with three officers restraining Floyd and two others standing by.

Chauvin is seen in the body camera video grabbing Floyd's fingers in an attempt to inflict pain to get him to comply, Stiger told the court. He was asked what if Floyd couldn't comply.

"At that point it is just pain," Stiger responded.

He also testified that the crowd of bystanders gathered at the scene did not pose a threat to Chauvin or other officers -- an assertion made by the defense, which described the crowd as hostile.

"They were merely filming, and most of their concern was for Mr. Floyd," the expert testified.

While it is possible for a crowd to distract an officer, Stiger does not believe it happened in this case because Chauvin was talking to Floyd.

"In the body-worn video, you can hear Mr. Floyd displaying his discomfort and pain, and you can also hear the defendant responding to him," he said.

On cross-examination, Stiger said some of the comments from bystanders could be considered potential threats and that officers are taught to predict future behavior. He also acknowledged that Chauvin could have used a Taser initially because Floyd actively resisted attempts to put him in a police vehicle.

Stiger's testimony initially began on Tuesday afternoon. He said that he has conducted over 2,500 use-of-force reviews.

The sergeant said officers were initially justified in using force when Floyd actively resisted arrest and refused to get into the squad car. Floyd also kicked at officers when he was first taken to the ground, body camera video shows. The circumstances then changed.

"However, once he was placed in a prone position on the ground, he slowly ceased resistance and at that point the ex-officers, they should have slowed down or stopped their force as well," Stiger said.

Prosecutors said in opening statements that Floyd struggled with opioid addiction, and Wednesday afternoon's testimony touched on the drugs connected to him.

Several white pills containing fentanyl and methamphetamine were found in Floyd's vehicle, and a smaller pill with Floyd's saliva on it was found in the back of the police squad car, three forensic scientists said Wednesday.

BCA investigator McKenzie Anderson searched the vehicles involved in May and then again months later after initially failing to collect some of the pills.

In Floyd's vehicle, she found two packets of suboxone, a drug that treats opioid addiction, three white pills, and bills stuffed between the seat and the center console, she said.

Inside the police squad car, she initially recovered Floyd's shoes and a strap and noted eight bloodstains that matched Floyd's DNA. On her second search of the car, she recovered a pill with a rough texture that did not appear whole as well as several small pieces that she thought might be pill fragments. Tests confirmed the smaller pill had Floyd's saliva on it, she testified.

Breahna Giles, a BCA forensic scientist, testified that she analyzed the white pills. They had the markings of a pill that would contain oxycodone and acetaminophen, but upon testing they actually contained methamphetamine and fentanyl, she said.

In addition, the glass pipe recovered from the vehicle contained THC, the psychoactive component of marijuana, but no plant material, Giles told the court.

Reyerson, the BCA senior special agent, described the extensive case into Chauvin and walked through parts of a composite video of him kneeling on Floyd for over nine minutes.

Reyerson was shown officer body-camera footage synced up with bystander video that provided two perspectives of Floyd's final moments. The video shows Floyd stopped talking about four minutes into the video and stopped moving about five minutes in, even as Chauvin's body weight remained on Floyd in a prone position, Reyerson testified.

Even after paramedics arrived, Chauvin kept his knee on Floyd for nearly a minute and a half until a paramedic motioned for him to get off.

Investigators found several items in an envelope in the trunk of the squad car, including two $20 bills, one of which was ripped in half, as well as cigarettes and a small pipe, Reyerson said. Pills were also found in the back of the police squad car, he said.