Deputy hurt in rollover crash after rock hurled through windshield 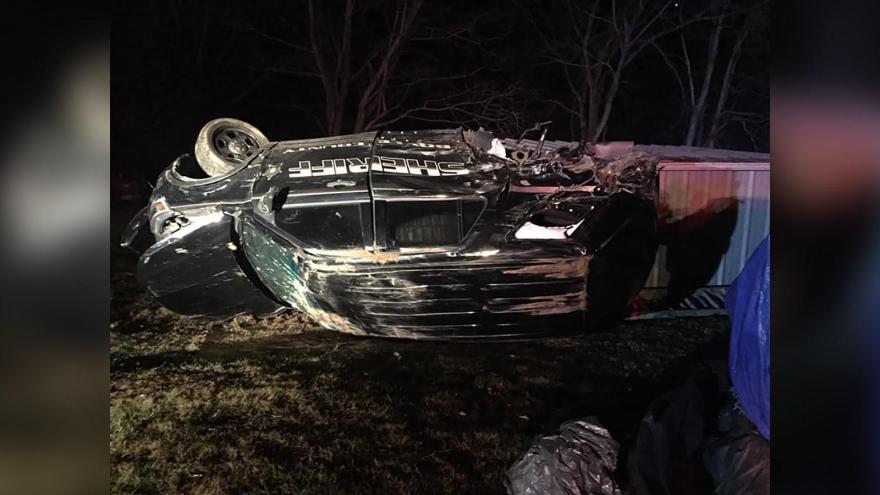 Boyle County Sheriff's Office released this image of the damaged vehicle from the crash site.

(CNN) -- A Kentucky deputy responding to a call about rocks being thrown at vehicles is recovering after being struck in the head.

A rock thrown at Boyle County Sheriff's Deputy Phillip Dean's vehicle Sunday shattered the windshield and hit him in the face. Dean then lost control of the vehicle which hit several trees and rolled over multiple times.

"He was able to get on radio but didn't know where he was at so they had him call 911 to ping his location," Boyle County Sheriff Derek Robbins told CNN. "The vehicle was in an area that couldn't be seen from the road."

The rock was thrown from a car traveling in the opposite direction. Robbins said the rock, which was recovered from the vehicle, is jagged and about the size of a "really big softball."

Dean is recovering at a hospital with broken bones and several lacerations, according to Robbins. Dean, a five-year veteran of the sheriff's department, told Robbins he "thought he'd been shot" when the rock exploded through the windshield.

"The rock could have killed him or the wreck," Robbins told CNN. "Someone was watching over him."

The driver of a tractor-trailer pulled over on the side of the road told police that several rocks had been thrown from a dark-colored passenger car as it drove by.

Police are currently looking for cameras in the area to see if there are images of the suspect. The dash camera in the deputy's vehicle is also being downloaded, but due to the heavy damage to the vehicle police are uncertain if they'll be able to recover it.

Any suspect arrested is likely to be charged with wanton endangerment and felony assault, according to CNN affiliate WLEX.