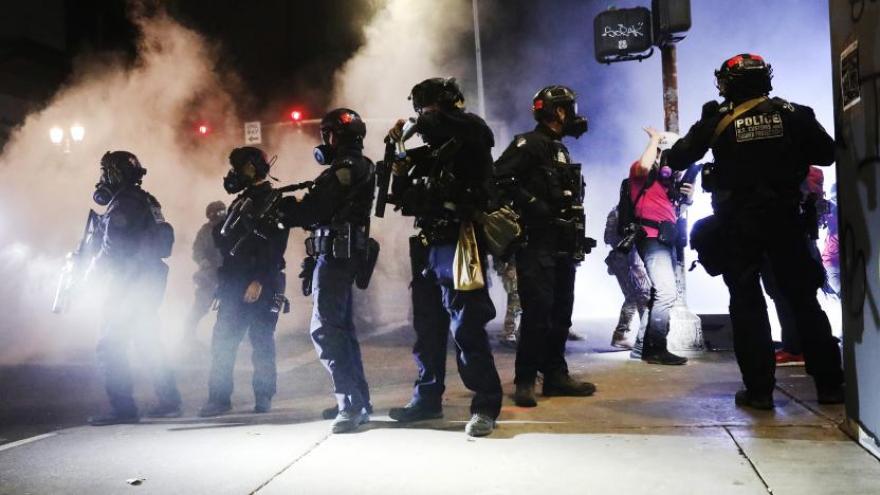 The department's inspector general flagged several major concerns with the deployment of more than 700 officers, including failure to properly train them to police riots and to conduct crowd control operations, raising concerns of increased risk to both officers and the public.

Tensions grew in Portland over the summer after federal officers arrived in the city, which had experienced prolonged and at times violent protests over demands for racial justice and police accountability.

Department officers did not have the necessary equipment to protect themselves during riots and violent protests, according to the report. Some officers did not even have shin guards, face shields or and protective eyewear.

Officers also reported problems with radio communications, such as the inability to communicate with DHS officers from other agencies.

"Without the necessary policies, training, and equipment, DHS will continue to face challenges securing Federal facilities during periods of civil disturbance that could result in injury, death, and liability," the report says.

However, despite identified equipment issues, "many DHS officers stated that efforts to protect the facilities were effective," the report says.

On Tuesday, the department said it was "prepared to implement additional" measures to safeguard federal facilities and federal personnel, as well as support jurisdictions as needed.

DHS Inspector General Joseph Cuffari is set to testify before the House Homeland Security Committee on Wednesday, where he will likely face questions about the effectiveness of his office's oversight role.

Last summer, DHS deployed law enforcement officers from several agencies to help the Federal Protective Service protect federal facilities in Portland as part of its "cross-designation" authority. Between June 4 and August 31, 755 officers from the Federal Protective Service, Customs and Border Protection, Immigration and Customs Enforcement, and the US Secret Service took part in the operation.

At the time, federal law enforcement officials and protesters became locked in a tense standoff centered at the Mark O. Hatfield US Courthouse in downtown Portland.

Over the summer, local Portland officials publicly clashed with DHS over the deployment, which critics said inflamed the situation.

"The tactics that the Trump administration are using on the streets of Portland are abhorrent," Portland Mayor Ted Wheeler told CNN at the time. "People are being literally scooped off the street into unmarked vans, rental cars, apparently. They are being denied probable cause. And they are denied due process."

Former acting Homeland Security Secretary Chad Wolf later said his department needed to "do a better job communicating" its intentions in the wake of the deployment of federal law enforcement officers to Portland.

"We are not targeting peaceful protesters, individuals exercising their First Amendment rights," he told Axios on HBO in August.

The inspector general recommended that DHS implement a plan to improve preparedness for similar future deployments and for the Federal Protective Service director to establish contingency plans for responding to civil disturbance at high-risk federal facilities.

DHS concurred with both recommendations. "The circumstances in Portland, OR were particularly challenging," wrote Jim Crumpacker, the department's liaison to the inspector general, pointing to the level of violence directed at law enforcement and prohibitions on local law enforcement assisting federal authorities.

Some officers questioned their involvement in the operation due to a lack of riot and crowd control training, according to the report. "A lack of training in these areas may increase the risk of injuries to officers and the public," the report says.

In November, the inspector general issued a "management alert" about the deployments, concluding that the Federal Protective Service director did "not properly designate" DHS employees deployed to protect federal properties under its authority. The alerts are reserved for serious issues that need immediate attention and remediation.

On Wednesday, the department watchdog office issued its final, comprehensive report on the deployment to Portland. Throughout the DHS deployment in the city, reports arose over the department's' authority to deploy federal officers to Portland, uniforms, cell phone surveillance and the use of less-lethal devices. The inspector general aimed in the report to "assess the authority, preparation, and activities of DHS law enforcement officers deployed to protect Federal property."

DHS had the legal authority to designate and deploy its law enforcement officers from other agencies to help the Federal Protective Service, but DHS was unprepared in other ways for the deployment.

"Specifically, not all officers completed required training; had the necessary equipment; and used consistent uniforms, devices, and operational tactics when responding to the events in Portland," the inspector general wrote.

According to the report, officers deployed to protect federal facilities in Portland did not wear consistent uniforms -- a point of contention for the public and lawmakers over the summer.

After concern grew about the blurring of law enforcement and military personnel, DHS moved to replace uniforms used by some of its federal law enforcement personnel in Portland. Customs and Border Protection officers "came with what they had," former top DHS official Ken Cuccinelli said during a congressional hearing in August, adding that "we have moved as quickly as we could to procure" new uniforms.

Some uniforms were a solid color and others had a camouflage pattern. "Wearing consistent uniforms would present a unified front, but DHS did not establish a uniform for cross-designation operations," the inspector general wrote.