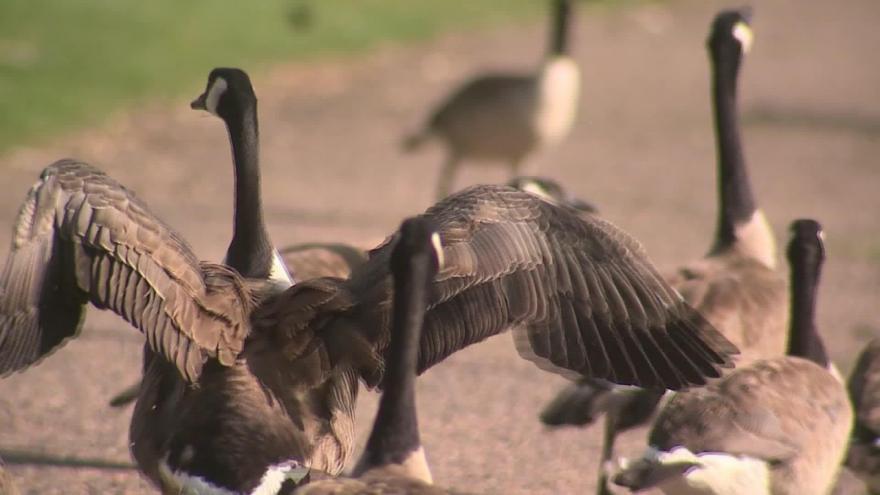 **Embargo: Denver, Colo.** Denver Parks and Recreation got permission from the state and federal governments to manage its goose population.

(CNN) -- The city of Denver apparently has a new motto: Geese are not friends. They're food.

Fed up with its growing goose problem, the city has implemented an initiative to round up its Canada geese and process them into food for "needy families," US Department of Agriculture spokeswoman Suzanne Bond said.

"The resident goose population in this area is too large, which will cause many problems including overgrazing of grass, ornamental plants and agricultural crops; accumulation of droppings and feathers; disease, attacks on humans by aggressive birds; and the fouling of reservoirs, swimming areas, docks, lawns and recreational areas," Bond said.

The USDA says goose meat is safe for human consumption.

There are an estimated 5,000 geese living in the city, which has been trying to manage its goose population for more than 15 years. The city says the birds have led to "increased human-wildlife conflicts in parks, vegetation destruction, sanitation concerns, poor water quality, and other maintenance challenges."

"We get so many complaints about people coming out here with a blanket to sit on the grass, and they cannot sit on the grass because there's so much goose poop in the parks," Scott Gilmore, deputy executive director of Denver Parks and Recreation, told CNN affiliate KDVR.

The program started this month because the geese are at their most vulnerable: They molt around June and July and can't fly.

The USDA will conduct the roundups and help regulate whether the meat is suitable for human consumption, Denver Parks and Recreation said. The agencies hope to donate the meat to "charitable organizations and wildlife rehabilitation facilities."

Canada geese are protected under the Migratory Bird Act, but Denver Parks and Recreation obtained authorization from both the state and federal governments to manage the population via roundups, according to its website.

Denver has tried other goose management tactics including oiling their eggs, spraying repellents and creating visual barriers to discourage geese from nesting.