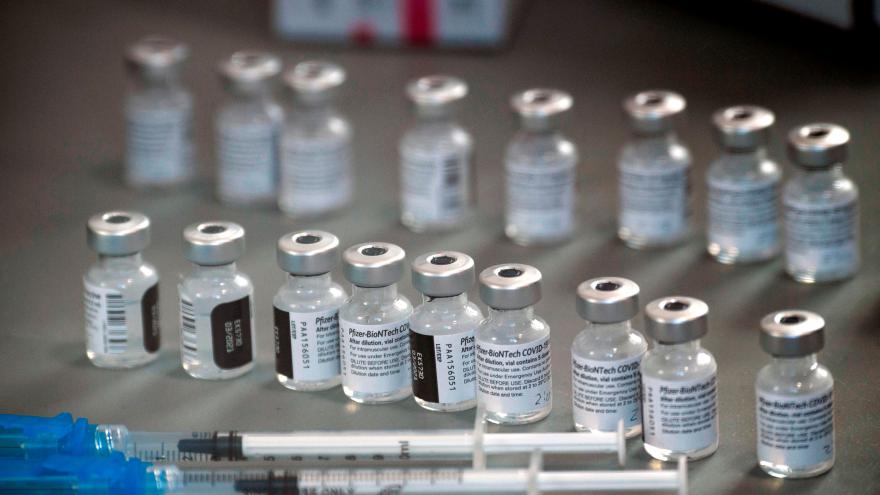 (CNN) -- As the US looks for ways to speed the administration of Covid-19 vaccines, some states and providers are pulling in non-traditional vaccinators, including dentists, retirees and students, to aid in the process.

With health care workers stretched thin responding to record numbers of coronavirus hospitalizations, jurisdictions are scrambling to find extra hands with the skills to help get shots into arms.

A report released by the Duke-Margolis Center for Health Policy and National Governors Association in December cited 20 states that are considering recruiting non-traditional providers, including students, dentists, veterinarians and paramedics.

The American Dental Association says dentists are cleared to give the vaccine in multiple states, including Oregon, where the first dentist in the US to administer a Covid-19 vaccine did so last month.

"Dentists are already trained to provide injections in objectively more complex areas of the mouth that commonly have gag reflexes, major blood vessels, nerves and a moving tongue," the California Dental Association said in a statement.

Some health systems are tapping a well of newly trained students to aid in the vaccination effort.

"It's going to be a team of really smart and educated young people that are going to be our immunizers," Susan Mashni, vice president and chief pharmacy officer for Mount Sinai Health System in New York City, said in December.

The University of Alabama at Birmingham typically pulls in nursing students to help with annual flu vaccinations. For the Covid-19 vaccine rollout, they also tapped medical and dental students.

"We have been using some atypical vaccinators because we're trying to prioritize keeping our licensed nurses at the bedside," said Dr. Sarah Nafziger, professor of emergency medicine at the University of Alabama at Birmingham. "While we're rolling out vaccine, we're simultaneously dealing with a patient surge."

A "beautiful thing to watch"

The university has even recruited public health students, who can't give shots but have the knowledge to help run vaccination sites.

"There's a lot of logistics involved when you have a vaccine site that processes over 1,000 people a day, so it's truly been a community effort here on our campus," said Nafziger. "It's been a beautiful thing to watch."

Nafziger said most student vaccinators at UAB aren't paid. Like many people giving vaccines around the nation, they're volunteering their time.

New Jersey is calling on its citizens to join the state's Medical Reserve Corps, a network of health care volunteers being tapped for vaccinators. The state is looking to retired health care workers in particular, who have the skills to administer vaccines and aren't actively attending to patients.

"It's a lot of retired physicians that are standing up to act as vaccinators," New Jersey State Commissioner of Health Judy Persichelli said during a news conference Wednesday.

There is a bit of red tape involved in recruiting vaccinators. They must be trained -- a roughly two hour process -- and not everyone with the skills to administer Covid-19 vaccines is authorized to do so.

Dr. William Reynolds, president of the American Optometric Association, says optometrists are an untapped resource in the vaccination effort.

The association says 19 states allow optometrists to administer medicine via injection -- and in California, they can administer flu and shingles vaccines -- but aren't authorized to give the Covid-19 vaccine specifically.

Reynolds noted that optometrists are widely distributed and ready to jump in to help smaller and rural communities that may need help.

"We're in smaller communities, as well as cities," he said. "Ninety nine percent of Americans live in a county that has an optometrist. Ninety percent of the Medicare population lives within a 15-minute drive of an optometrist."

He said there is little financial incentive for optometrists to aid in the effort, but getting the population vaccinated as quickly as possible will help get their offices -- and the nation -- back to normal.

"We want to be part of the solution," said Reynolds.