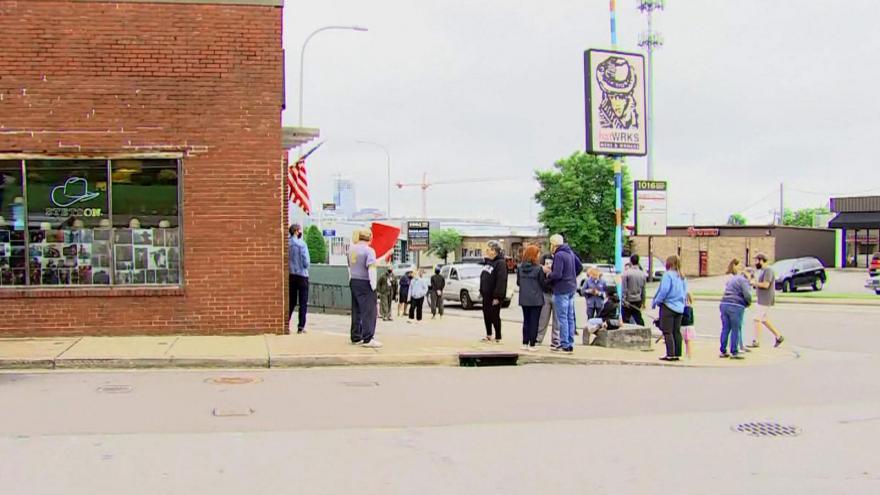 The owner of a Nashville hat store is being accused of anti-Semitism after announcing the sale of yellow Star of David badges, similar to the ones Nazis forced Jews to wear during the Holocaust, which read "NOT VACCINATED."

(CNN) -- The owner of a Nashville hat store is being accused of anti-Semitism after announcing the sale of yellow Star of David badges, similar to the ones Nazis forced Jews to wear during the Holocaust, that read "NOT VACCINATED."

Nashville's hatWRKS posted a photo Friday on Instagram announcing the sale of a Star of David patch that reads "NOT VACCINATED," according to CNN affiliates WZTV and WSMV. The post has since been removed.

The caption on the post read: "patches are here!! they turned out great. $5ea. strong adhesive back .... we'll be offering trucker caps soon."

CNN has made several attempts to reach the store's owner, Gigi Gaskins, but has not heard back.

An apology was issued Sunday on the store's Instagram.

"In NO WAY did i intend to trivialize the Star of David or disrespect what happened to millions of people. that is not who i am & what i stand for," read the apology. "My intent was not to exploit or make a profit. my hope was to share my genuine concern & fear, and to do all that i can to make sure that nothing like that ever happens again. i sincerely apologize for any insensitivity."

Jewish people in Europe were legally forced to wear badges as far back as the 13th century, according to the Holocaust Memorial Center. The Nazis resurrected this practice, which facilitated the Jews' "separation from society and subsequent ghettoization, which ultimately led to the deportation and murder of 6 million Jews," the center's website says.

After the post was removed, another hatWRKS post from Friday said, "people are so outraged by my post? but are you outraged with the tyranny the world is experiencing? if you don't understand what is happening, that is on you, not me."

"As a result of the offensive content and opinions shared by hatWRKS in Nashville, Stetson and our distribution partners will cease the sale of all Stetson products," Stetson said on Twitter.

Stetson announced its decision after tweeting it was investigating the complaints.

"Along with our distribution partners, Stetson condemns antisemitism and discrimination of any kind," the company said.

Kangol said it gave Gaskins "the chance to change."

"However, her further posts indicate to us that she is not sincere in her apology, nor has she removed offensive posts from her feed," Kangol said on Instagram. "We are permanently terminating hatWRKS Nashville as a customer of our brand effective immediately."

The company said that while it respects freedom of speech, "The use of the Star of David by our customer as a statement against vaccination was not just insensitive, but disrespectful and wrong."

Goorin Bros. is "horrified by the display and selling of the Jewish badge by HatWRKS," the company's Ben Goorin said on Instagram.

"To make a mockery of the Holocaust in any form is unacceptable and completely insensitive," Goorin said. "We are looking at all options to fix and address this unfortunate circumstance."

Tula Hats posted that it has "asked to be removed from their website as a supplier," saying on Facebook, "Tula does not condone antisemitism or discrimination of any kind."

The website for hatWRKS showed dozens of styles of Stetson hats for sale Monday, with many listed at more than $200. There were also hats available on the site Monday by Kangol, Tula Hats and Goorin Bros.

Demonstrators gathered outside the store Saturday morning with signs that read, "No Nazis in Nashville" and "Nashville condemns hatWRKS," according to video from WSMV.

"We're here to protest hate and ignorance with regard to what she's doing in selling yellow stars that are a symbol of the greatest atrocity the world has ever seen, which is the loss of 6 million human beings," Nashville resident Ron Rivlin told WSMV outside the hat store.

"I think I understand what she was trying to do, but the way she did it was just, she doesn't understand how offensive it is to the Jewish community and to everybody," Rivlin said.

"This is not about vaccine or anti-vaccine. People are free to make their own decisions," Rivlin added. "Jews didn't have a choice whether to wear that star or not. They were forced to wear that star, and that led to their eventual death," said Rivlin.

"There's no way you could reasonably associate choosing to go without vaccinations for Covid ... and assuming that you're in the same spot as a Jewish person in Nazi Germany," Abramson said.

"To me, it's willful ignorance," Abramson continued. "The information is out there. People are willfully ignoring facts, information and history because it doesn't fit what they want to believe or it doesn't fit some narrative they have."

Rabbi Laurie Rice, of Congregation Micah in Brentwood, told WSMV on Friday that "using the yellow star or any Holocaust imagery for anything really is a disservice to the memory of the 6 million Jews who were systematically murdered during the Holocaust."