Demonstrators gather in cities and outside election offices amid election tensions 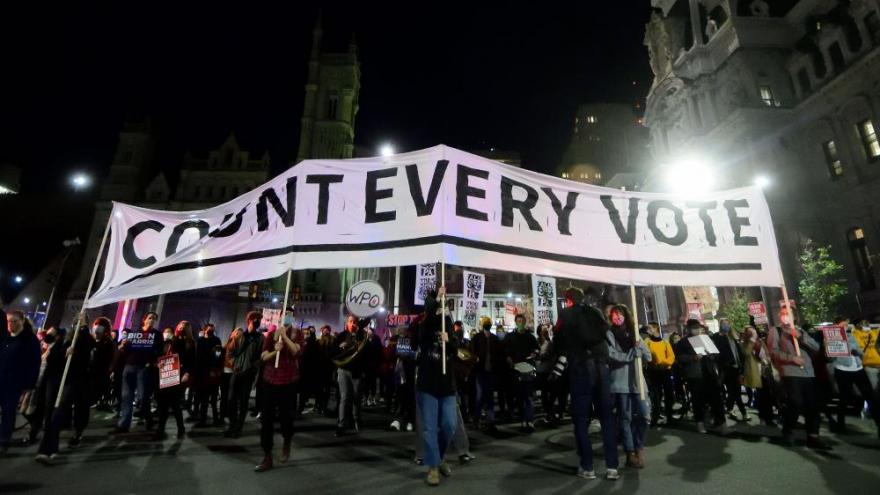 Demonstrators demand to Count Every Vote in a Post-election protest in Center City Philadelphia, PA, USA.

(CNN) -- Small groups of demonstrators gathered at swing state election offices and in large cities around the country Wednesday night as votes in the presidential election continued to be counted.

The sporadic protests put on display the tensions and high stakes of this presidential election between President Donald Trump and former Vice President Joe Biden, which remained too early to call as of Thursday.

The disparate messages of the demonstrations provided rapid whiplash, particularly outside vote-counting centers.

In Michigan, where Trump once held an early lead in the vote count, a small group of his supporters chanted to "stop the count" outside a Detroit convention center where votes were being counted Wednesday. CNN is projecting that Biden has won Michigan, a critical battleground state.

Yet in Phoenix, Arizona, where Trump was behind in the early vote count, a group of his supporters gathered outside a ballot-counting center Wednesday night and chanted to "count the vote." Arizona, another vital state in the election, remains uncalled.

"I don't understand the objective of these protesters," Arizona Secretary of State Katie Hobbs, a Democrat, said Thursday of the protesters who gathered at a Maricopa County vote counting center -- some of whom were armed. "Of course, we're going to count all the votes. We are legally obligated to do that."

In Philadelphia, part of the swing state of Pennsylvania, mail-in ballots are still being counted and the election results are not final. Protesters gathered near the convention center on Wednesday night where votes are being counted to chant, "Count every vote."

"This is what you see when people fear that their rights are being taken away from them," Rich Garella of Protect Our Vote Philly told CNN affiliate WPVI.

Other people gathered in liberal enclaves like New York, Seattle and Los Angeles in calls to count every vote.

In New York, at least 30 people were arrested as the NYPD said people "attempted to hijack a peaceful protest by lighting fires, throwing garbage and eggs in Manhattan."

One protester was arrested after spitting on a police officer, Lt. John Grimpel of the NYPD told CNN. He could not say what that individual was charged with.

New York Mayor Bill de Blasio said there were "relatively few" people out in the demonstrations, particularly compared to what had been projected.

"What we've seen is written material that was prepared including charts delineating different roles that were made by protesters as far away as Hong Kong that depicted roles for whose job it was to throw objects at the police, whose job it was to record the police response on camera and turn that towards propaganda," Miller said.

The demonstrations in the US were not solely related to the presidential election. In Seattle, a group calling to protect every vote and another group supporting Black Lives Matter joined forces to form one demonstration.

And in Minneapolis, a group of activists marched onto Interstate 94 in an attempt to block traffic. The primary organizers included members of the Twin Cities Coalition for Justice for Jamar Clark, as well as other groups. Clark, a 24-year-old Black man, was fatally shot during a scuffle with police in 2015.

The goal of the protest, according to the group, was to raise awareness about the impact of the Covid-19 pandemic, use of police force, and the effect of the economic downturn on low-income Minnesotans and people of color.

The Minnesota State Patrol and Minneapolis Police cited and released 646 people for being a pedestrian on a freeway and public nuisance, according to a press release. Law enforcement said the gatherings endangered pedestrians and drivers on the freeway.

"We respect the right of everyone to express themselves under the First Amendment, but the freeway is not a place to do that," the state patrol said in a tweet.