Dispatch audio from emergency responders says Andrew Brown Jr. was shot in the back 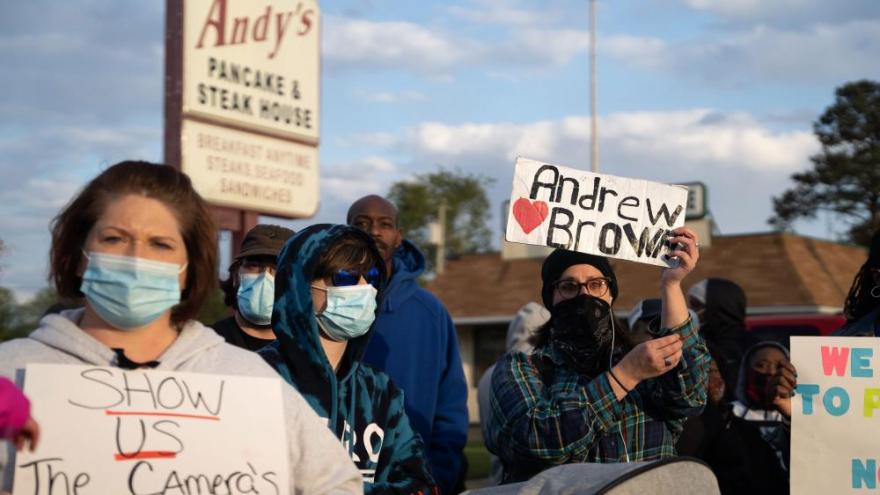 Andrew Brown Jr. was killed in a deputy-involved shooting while sheriff's deputies served a search warrant April 21 in the North Carolina city of Elizabeth City, officials with the Pasquotank County Sheriff's Office said.

(CNN) -- In the moments following the shooting of Andrew Brown Jr., first responders can be heard on dispatch audio saying a man has been hit and has gunshot wounds to the back.

Audio of the call, posted to the archives of the website Broadcastify, includes a dispatcher saying crews are responding to a call of "shots fired" and an individual can then be heard saying "we do have a subject who was hit."

Later a first responder says, "Be advised EMS has one male, 42 years of age, gunshot to the back."

Another person says the man has "gunshot wounds."

Brown, who was Black, was shot and killed Wednesday morning by deputies in Elizabeth City, North Carolina, when they attempted to serve him with an arrest warrant, the Pasquotank County Sheriff's Office said.

The shooting occurred as protests are held across the nation over the deaths of Black people at the hands of law enforcement officers.

Seven deputies have been placed on administrative leave, two have resigned and one retired in the aftermath of the shooting, Pasquotank County Sheriff Tommy Wooten told CNN.

Not all the deputies who have been placed on administrative leave discharged there firearms, but were all part of the warrant operation, he said.

Governor calls for body camera video to be released

That news comes as protests in Elizabeth City continue, the Brown family met with the sheriff but didn't see the body camera footage and state and local leaders called for the video to be released.

The City Council at an emergency meeting Friday evening called for the footage recorded by deputies' body cameras to be released. Gov. Roy Cooper also called for the public to see the video as quickly as possible.

The body camera footage of the shooting cannot be released without a court order, the district attorney for the region and the Pasquotank County attorney said in a joint statement Thursday.

"We must follow the law and the law prohibits us from publicly releasing the body worn camera footage," District Attorney Andrew Womble and Pasquotank County Attorney R. Michael Cox said. "The law does allow a private viewing by the family of Mr. Brown we are working with their attorney to arrange that."

But when family members met with the sheriff Friday he didn't show them the video as they had expected.

Wooten told reporters the footage won't be released right now because of the district attorney doesn't want its release to hinder the investigation. Wooten said he apologized to the family and told them he was trying to follow the right procedures.

He said his office, which is the custodian of the video, has "absolutely nothing to hide."

When asked whether he will petition to have the video released he said that could happen.

"Because I want what the people of this county want," he said, but he added that "on the law enforcement side I am trying to let the investigation unfold."

City manager Montré Freeman told CNN's "OutFront with Erin Burnett" that the council has sent the sheriff a letter seeking the release of the video. The sheriff has 72 hours to respond and then the matter could head to court.

Freeman complimented the peaceful actions of protesters, but said he was worried something could happen if they don't get answers soon.

"This thing is going to have a ripple effect the longer it's out here," he said.

Law enforcement has released few details about the Brown shooting. Authorities have not said where or how many times Brown was shot.

Wooten said Friday there were "many" body cameras being worn.

Betty Banks, Brown's aunt, said that Wooten told them they did not find any drugs or weapons in Brown's car or in his house. She said that no other details about the investigation were shared with the family.

"We really don't know any more than we did before," Banks told CNN. Wooten offered his condolences at the beginning and throughout their meeting, she added.

Jharod and Khalil Ferebee, Brown's two eldest sons, told CNN on Friday that they have hired Ben Crump to represent them.

Protests over the shooting kicked off for a third straight day Friday, with demonstrators calling for authorities to release officers' body camera footage of Wednesday's killing.

Demonstrators stood in the streets early Friday afternoon, blocking a few intersections in a commercial section of the city of about 18,000 people.

There were still demonstrations Friday evening with hundreds of people in the crowd -- a number similar to Thursday's protest.

Wooten said in a video message Thursday that if the evidence shows that any of the deputies involved violated the law or any department policies, they will be held accountable.

"Our deputies attempted to serve the arrest warrant. They fired the shots. They've been put on administrative leave until we know all the facts," Wooten said.

CORRECTION: An earlier version of this story incorrectly identified Andrew Brown's age. He was 42.