Demolition of New Orleans cranes delayed once more. Halloween parade is back on 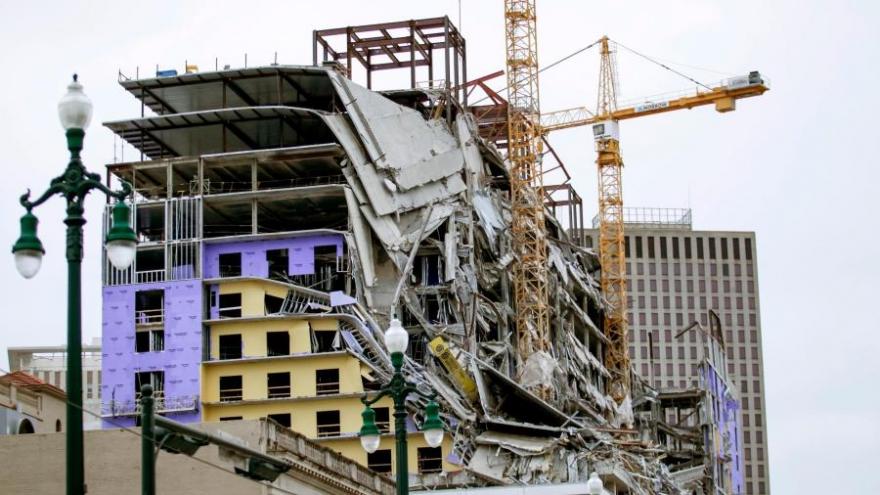 The implosion of two cranes at the Hard Rock Hotel in New Orleans, which partially collapsed during construction, has been delayed yet again -- at least until Sunday, officials said on Saturday.

(CNN) -- The implosion of two cranes at the Hard Rock Hotel in New Orleans, which partially collapsed during construction, has been delayed yet again -- at least until Sunday, officials said.

Saturday evening's Krewe of Boo event downtown, the city's official Halloween parade, had been canceled because of the expected demotion, but now it's back on.

"After consulting with the explosive experts, we have a shift in our timeline," New Orleans Fire Chief Tim McConnell told reporters Saturday, adding that the soonest the demolition could take place is about noon Sunday.

"They're working to get it done," he said of the engineers. "We've told you this is a very dangerous building. The cranes are still in a precarious situation."

Crews had hoped to bring the cranes down Friday evening but that was delayed because of a tropical storm, officials said.

The demolition appeared to be set for Saturday but the experts discovered the cranes were more damaged than previously thought.

"So they need to do things that are a little bit safer," McConnell said. "Once again, safety is the No. 1 concern."

Mayor LaToya Cantrell said she canceled the popular Halloween event but decided to let it happen after the latest briefing from experts.

"This will not change," she said. "So it is official."

Tropical Storm Nestor was tracking east and has potential to bring 35 mph winds, said Collin Arnold, director of the city's Office of Homeland Security and Emergency Preparedness. Cantrell had issued a state of emergency.

Arnold said officials will need the public's cooperation during the demolition because people will want to watch, but he urged against it.

"If you are in line of sight of this, you're too close," Arnold said.

Experts plan to strategically place explosives onto the cranes, hoping the debris lands in a certain area, avoiding major gas and power lines, according to McConnell.

Two bodies remain in the rubble

Portions of the Hard Rock Hotel collapsed last Saturday. More than 100 construction workers were there, according to one of the construction companies.

Video footage showed workers emerging from a giant cloud of dust after the upper floors collapsed and debris filled the street.

At least two people were killed and 30 hospitalized, authorities said. All but one of the injured have been discharged.

Cantrell said Friday she attended the funeral of Anthony Magrette, 49, whose body was removed from the site on Sunday. Cantrell emphasized the importance of finding and removing the two bodies authorities believe are still in the rubble.

Documents and paperwork from the offices of contractors in the hotel have been collected and put in storage as evidence, Cantrell said.

10 injured in the collapse are suing the construction companies

The lawsuit accuses the construction companies of failing "to take reasonable care in planning, assessing, and monitoring the construction of the collapsed structure." It also claims that "it was apparent that the structural supports at the building were inadequate to support the weight of the concrete slabs on the upper floors."

"The primary goal is to get to the bottom of exactly what happened, and make sure that nothing like this ever happens again," an attorney for the plaintiffs said.