Democrats working on legislation to provide $3,000 payments per child amid pandemic 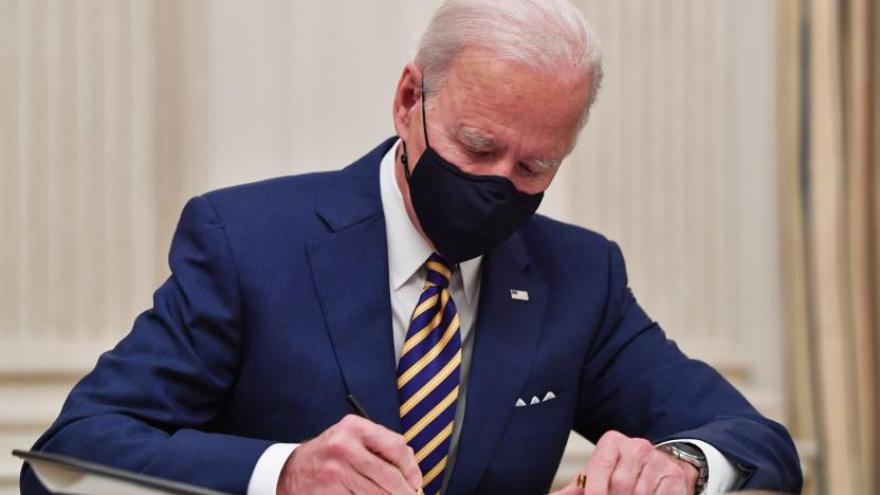 US President Joe Biden signs executive orders for economic relief to Covid-hit families and businesses in the State Dining Room of the White House in Washington, DC, on January 22, 2021.

(CNN) -- House Democrats are working on legislation proposed by President Joe Biden to expand the existing child tax credit, directing the IRS to send recurring monthly payments to American families, a source familiar with the matter confirmed to CNN.

The changes would last for a year, but lawmakers would then push to make them permanent, another Democratic aide said.

The source also confirmed to CNN that House Ways and Means Committee Chair Richard Neal of Massachusetts is directly involved in the effort to write the expansion of the child tax credit, as well as House Appropriations Committee Chair Rosa DeLauro of Connecticut and Rep. Suzan DelBene, Democrat of Washington.

The drafting of the proposed legislation was first reported by The Washington Post.

Eligibility for the benefit, similar to the stimulus checks, would be based on family income for the prior tax year and be phased out at a certain income amount, the Post reported.

Biden has previously said he wants to expand the child tax credit and last week he unveiled a $1.9 trillion proposal that would do so for one year. He also called for making it fully refundable to allow more households to claim it. Currently, 27 million children live in low-income families who receive a partial or no tax credit because they earn too little, according to the left-leaning Center on Budget and Policy Priorities.

A one-year expansion would cost about $120 billion, according to the Committee for a Responsible Federal Budget, a non-partisan fiscal watchdog.

The President's proposal also includes an expansion of the Earned Income Tax Credit to more low-income workers, along with $1,400 stimulus checks, increased unemployment, nutrition and housing aid, among other measures.

"All told, the American Rescue Plan would lift 12 million Americans out of poverty and cut child poverty in half. That's 5 million children lifted out of poverty," Biden said Friday before signing two executive orders that would augment nutrition assistance and strengthen federal worker protections.

Biden also noted that the proposal would reduce poverty among Black families by one third and among Hispanic households by almost 40%.

The American Rescue Plan would augment many of the measures in Congress' historic $3 trillion coronavirus relief bill from March and in the $900 billion legislation from December, which was scaled back to garner support from Senate Republicans.

CNN has reported that Biden's stimulus proposal already faces Republican objections, and Senate Democrats have been laying the groundwork to use a rare procedural tactic known as reconciliation to pass major parts of the package if Republicans stall their efforts.

The White House has urged patience when it comes to negotiating and passing the stimulus plan on a bipartisan basis through the regular Senate process, but Biden's team has said they aren't willing to "take any tools off the table."

The current child tax credit provides up to $2,000 per child under the age of 17. The credit phases out for single parents with a modified adjusted gross income over $200,000, and $400,000 for married couples. It is paid as a lump sum, not in monthly increments.

The $3 trillion Heroes Act, which the House passed in May, included similar enhancements to the child tax credit.

The 2017 Tax Cuts and Jobs Act broadened eligibility to many more upper-middle-income households, increased the size of the credit for many families and the amount that is refundable. The changes were pushed by Republican Sen. Marco Rubio of Florida.

More than 48 million households are expected to claim the child tax credit for 2020, according to Congress' Joint Committee on Taxation.