Democrats want to give parents cash instead of a tax credit 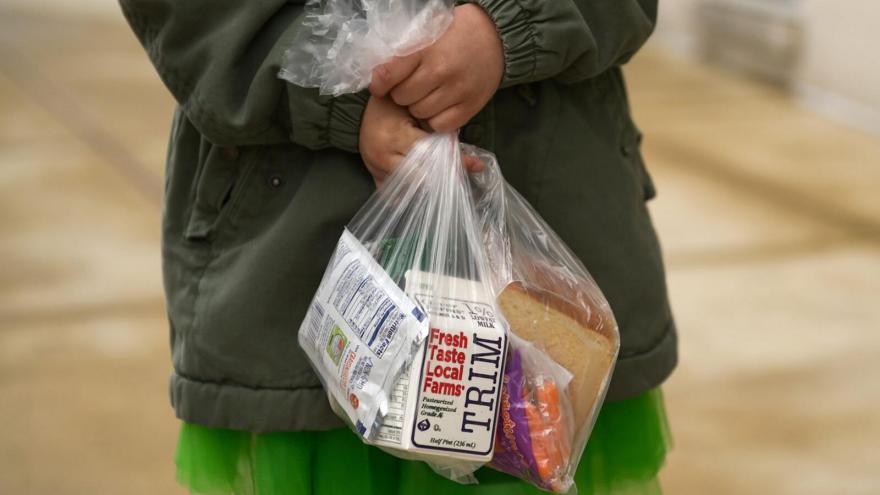 A child holds a packed lunch and breakfast as the Wyomissing Area School District handed out lunches (and breakfasts) for the first time Tuesday, March 17 in West Reading, Pennsylvania.

(CNN) -- Though it started as a way to provide relief to middle class families, the child tax credit has also evolved into a bipartisan tool for lifting kids out of poverty.

Now, President Joe Biden and congressional Democratic leaders want to overhaul the credit, turning it into a guaranteed income stream worth hundreds of dollars a month and broadening it to help millions of low-income families who are currently excluded.

The US has one of the highest child poverty rates of any wealthy country and one of the lowest shares of national spending on children and families. Roughly 1 in 7 kids live in poverty, according to the most recent Census Bureau data. More than one-quarter of Black children and one-fifth of Hispanic children live below the poverty line.

When the child tax credit was established in 1997 by a Republican-led Congress under former President Bill Clinton, very few low-income parents could claim it. That's because the $500 credit was non-refundable, and these families' federal income tax liability was too low.

During the Bush and Obama administrations, the tax credit's size was doubled and it was made partially refundable so more low-income families could benefit.

Then, as part of the Republican tax cut legislation in 2017, it was doubled again and the thresholds were widened so more households closer to the bottom and to the top of the income ladder qualified. The changes were pushed by Sen. Marco Rubio, Republican of Florida, with help from former President Donald Trump's daughter and adviser Ivanka Trump.

As a result, the child tax credit currently provides up to $2,000 per child under the age of 17. Single parents who earn up to $200,000 and married couples who make up to $400,000 qualify for the full credit, which phases out after those thresholds.

Some 90% of families with children will receive an average credit of $2,380 in 2020, according to a non-partisan Tax Policy Center estimate.

And the credit, along with the earned income tax credit for low- and moderate-income working families, helps nearly 12 million children escape poverty or raise them closer to the poverty line, according to the left-leaning Center on Budget and Policy Priorities.

Low-income families have been left out

Still, 27 million children live in low-income families that receive a partial or no credit because they earn too little, according to the center. Parents must have annual income of at least $2,500 to start claiming the benefit, but the amount they receive depends on their earnings.

"Right now, low-income kids get the least, when they really should get the most," said Chuck Marr, the center's senior director of federal tax policy. "It would help them the most."

The credit would increase to $3,600 per child under the age of 6 and $3,000 per child age 6 through 17 for a single year, under legislation introduced in the House Monday. The full boost would be available to single parents making up to $75,000 annually and couples with incomes up to $150,000, before phasing out for higher earners.

It would become fully refundable so even the lowest-income families would qualify. And it could be paid on a monthly basis, $300 a month for each young child and $250 for each older one -- giving parents a steady stream of income to pay rent, buy groceries and handle other expenses -- instead of as a lump sum once a year, the typical way households receive tax credits.

This would lift more than 4 million children out of poverty and millions more closer to the poverty line "in one fell swoop," Marr said. "It gives millions of kids a better chance to live up to their potential."

These provisions likely won't garner any Republican support because they are included in the larger relief package that Democratic leaders are fast-tracking through a procedure called reconciliation, which will allow them to pass it without GOP votes.

But some Republicans also support revising the child tax credit. Utah Sen. Mitt Romney last week unveiled a proposal to provide a monthly cash benefit of $350 for each young child ($4,200 annually) and $250 for each school-aged child ($3,000 annually).

He says that his plan establishes a "firm national commitment to all of America's families," while promoting marriage, providing equal treatment for working and stay-at-home families and cutting child poverty by up to one-third.

To pay for his $66 billion measure, which also include changes to the earned income tax credit, Romney would eliminate several existing government assistance programs -- including Temporary Assistance for Needy Families -- and tax provisions, including the deduction for state and local taxes.

Sam Hammond, who helped Romney craft his proposal, recently co-authored a report titled "The conservative case for a child allowance" for the Niskanen Center, a centrist think tank where he serves as director of poverty and welfare policy.

The current child tax credit hasn't really been effective as an anti-poverty tool because it excludes the lowest-income households by design, he said.

A universal allowance for kids would address both child poverty and family instability, said Hammond, who noted that marriage rates have fallen over the past four decades and the birth rate in 2019 hit its lowest rate in 35 years. Part of the reason is the increasing cost of housing and child care.

Since parents aren't paid more than childless workers, they are at a disadvantage since they must support dependents, Hammond said. Monthly payments for kids would level the playing field.

Romney's proposal would be run through the Social Security Administration, rather than the Internal Revenue Service to shift the benefit toward a monthly allowance instead of a tax credit.

But other Republicans, including Rubio and Sen. Mike Lee of Utah, oppose the idea of sending checks to parents, regardless of whether they have jobs and earn income.

"We do not support turning the child tax credit into what has been called a 'child allowance,' paid out as a universal basic income to all parents. That is not tax relief for working parents; it is welfare assistance," the senators said in a joint statement last week.

"An essential part of being pro-family is being pro-work. Congress should expand the child tax credit without undercutting the responsibility of parents to work to provide for their families," they said.