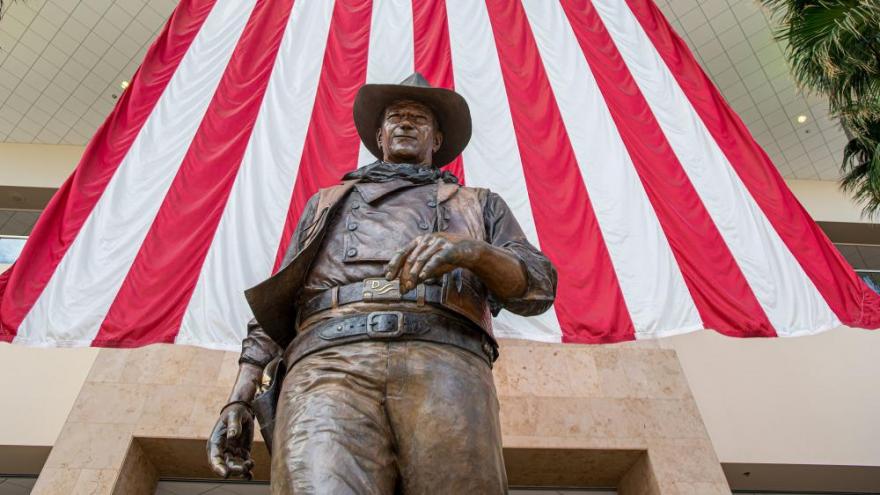 A statue of John Wayne was placed in the airport in 1982, three years after the name change.

(CNN) -- Democrats in Orange County, California, are done with The Duke, and they want John Wayne's name and likeness stripped from the county's airport.

The pols cite Wayne's professed support of white supremacy in a 1971 Playboy interview, in which he espoused derogatory views of African Americans, Native Americans and movies with gay characters.

The article went viral in February 2019, but amid calls to take down tributes to Confederate soldiers and others who promoted hateful views, it has resurfaced and serves as the basis for the Orange County Democrats' resolution, which passed Friday.

It is up to the Orange County Board of Supervisors to make the final decision. Local Democrats want it renamed Orange County Airport.

"While some outside Orange County may not know of John Wayne's beliefs in white supremacy, many Orange County residents have been calling for his removal for years," county party chairwoman Ada Briceño said in a statement. "We're seeing renewed calls for this right now, and it's time for change."

'They're trying to contradict how he lived'

In an interview last year, the actor's son, Ethan Wayne, said his dad's words in the Playboy Q&A were being taken out of context and that his father "took everyone at face value."

"It would be an injustice to judge someone based on an interview that's being used out of context," he said. "They're trying to contradict how he lived his life, and how he lived his life was who he was. So any discussion of removing his name from the airport should include the full picture of the life of John Wayne and not be based on a single outlier interview from half a century ago."

State Sen. Tom Umberg, also a Democrat, wrote an op-ed published Saturday in The Orange County Register explaining his view that erecting statues and christening buildings should be reserved for those who reflect the county's values. That won't be the case, he wrote, for a child who today Googles the actor whose career spanned more than five decades.

"What they'll discover is that John Wayne died 41 years ago and was an actor who was most famous for his roles in Westerns and war movies, although in real life he was never a cowboy nor served in uniform," the lawmaker wrote.

"Among other disturbing facts, she will also discover that he was a self-proclaimed white supremacist."

Umberg proffered other Orange County luminaries for whom the airport could be named, including Medal of Honor recipients Walter Ehlers, Mike Monsoor and Tibor Rubin. Ehlers stormed the beach on D-Day, Monsoor died in Iraq protecting his fellow Navy SEALS from a grenade blast and Rubin survived the Holocaust and more than two years as a prisoner of war during the Korean War.

'I believe in white supremacy...'

Wayne's oeuvre included more than 150 feature-length films, including "Sands of Iwo Jima," for which he earned an Oscar nomination for best actor, and "True Grit," for which he took a little golden guy home. He died in 1979 in Los Angeles at age 72..

Though the county Democrats' resolution cites two direct quotes from the Playboy article, there are numerous instances in which Wayne made bigoted remarks:

Aviation pioneer Eddie Martin opened the airport, located south of Los Angeles, in 1923 and opened a flight school and eponymous aviation company there. Orange County acquired it in 1939.

The county Board of Supervisors renamed Orange County Airport to John Wayne Airport in 1979, calling the actor a "man of humility, of honesty, and a hero of the American West (who) was a symbol to the world of the traditional American values."

The same year, The John Wayne Associates commissioned sculptor Robert Summers to create a 9-foot statue of The Duke, in cowboy garb, sauntering atop a marble pedestal. The statue was finished in 1982 and later placed in the lobby of the Thomas F. Riley Terminal, named for a Marines brigadier general who went on to serve as an Orange County supervisor.

In addition to the statue, the airport's gift shops celebrate the actor with T-shirts, shot glasses and other knickknacks bearing Wayne's image.