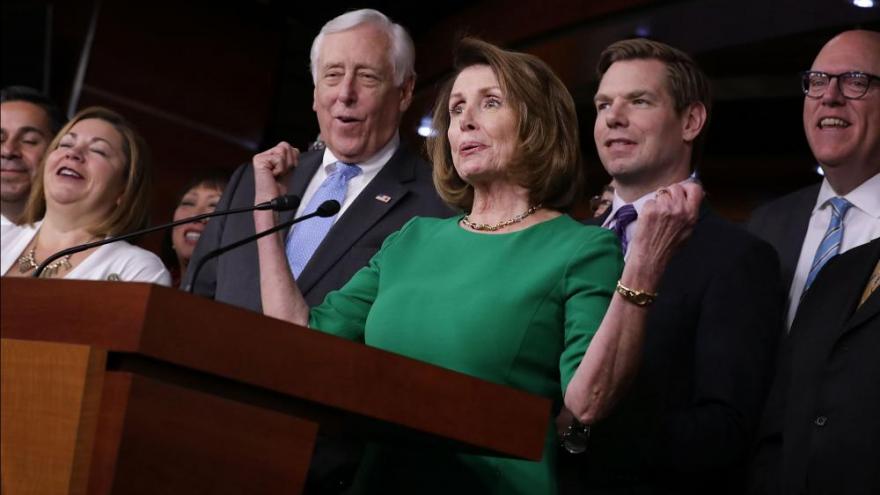 (CNN) -- House Democrats announced a sweeping new Covid-19 stimulus bill on Tuesday with a price tag expected to be more than $3 trillion -- an amount that would stand as the largest relief package in history.

The legislation, which provides funding for state and local governments, coronavirus testing, and a new round of direct payments to Americans, sets up an immediate clash with the Senate, where Republican leaders have said another round of emergency funding is not yet needed.

Sen. John Barrasso, a member of Republican leadership in the chamber, warned that the new bill is dead on arrival. "That will not pass. It's not going to be supported," he said of the new legislation.

The package is expected to cost more than $3 trillion, dwarfing the stimulus measure enacted in March, which was more than $2 trillion and at the time amounted to the largest emergency aid package in American history.

The bill, which Democrats are calling the Heroes Act, would provide nearly $1 trillion for state and local governments, a $200 billion fund for essential worker hazard pay, an additional $75 billion for Covid-19 testing, tracing and isolation efforts, and a new round of direct payments to Americans of up to $6,000 per household, according to a fact sheet released by the House Appropriations Committee.

House Majority Leader Steny Hoyer, a Maryland Democrat, notified members on Tuesday afternoon that the House is expected to meet Friday morning to vote on the legislation.

While congressional Republicans dismissed the bill as a liberal wish list on Tuesday, the legislation does not include some provisions that progressive Democrats wanted -- a result that some progressive are now expressing frustration over.

Prominent House progressives, including the so-called "squad" of freshman Democrats Rashida Tlaib, Alexandria Ocasio-Cortez, Ilhan Omar and Ayanna Pressley, signed onto a letter to congressional leadership in both parties on Monday calling for recurring monthly payments as part of a new coronavirus bill.

But the bill unveiled by House Democrats does not provide for recurring payments. Instead, it includes a second round of one-time direct payments to Americans.

Another progressive priority prompted pushback during a private call among House Democrats on Monday when Rep. Pramila Jayapal of Washington state took issue with the bill because it was not expected to include the Paycheck Guarantee Act, a plan the Congressional Progressive Caucus co-chairwoman had pushed to cover 100% of workers' wages up to $90,000 per year, according to three sources on the call.

"When people say that Jayapal's bill for a paycheck guarantee or recurring payments is 'too costly,' I'd like them to explain to me why they think in a low inflation, low interest rate environment a crisis response of spending to prevent massive unemployment and a shrinking of the GDP is bad policy. I have yet to hear a coherent economic rationale," California Rep. Ro Khanna, who championed the recurring payment plan, told CNN on Tuesday.

The leaders of the Congressional Progressive Caucus -- Jayapal and Rep. Mark Pocan of Wisconsin -- sent a letter to Pelosi and obtained by CNN on Tuesday asking for the Friday vote to be delayed until next week to give them more time to review the plan. The letter also requests a full caucus meeting when they return to Washington.

House Democrats have pressed ahead with a new stimulus package amid stiff resistance from Republican lawmakers and the White House, who say they want to wait to see the effect of previously enacted relief measures before moving forward with any new package.

Pelosi argued the bill is "not partisan," during an interview with CNN's Jake Tapper on "The Lead," while acknowledging that there may be critics on the left and the right.

"It would be an endless amount of money if we put our wish list for the future in there," Pelosi said, "But that is not what the case is. Sometimes I get a little heat from my own folks who say, 'why can't we do this in this bill?'"

Without some Republican support, the House bill cannot pass in the Senate. But unveiling legislation now gives Democrats an opportunity to showcase their priorities and outline their legislative vision for how to help a country in dire straits as a result of the devastating pandemic.

Republican Sen. John Cornyn reiterated Tuesday that he believes there is no "urgency" on passing another coronavirus relief bill when asked if the Senate will likely wait until after Memorial Day recess to take up phase four legislation. Like Barrasso, Republican Sen. Lindsey Graham also referred to the bill as "dead on arrival" in the Senate.

Senate Republicans are grappling with divisions of their own, however, including on whether to support additional aid for state and local governments.

Republican Sen. John Kennedy of Louisiana privately met Tuesday afternoon with Trump and a small group of GOP senators and pitched Trump on his bill to give states and cities more flexibility on how they spend $150 billion in aid already approved through the March stimulus law.

The GOP is divided over the issue, with some not eager to give states and local governments more leeway to spend money unrelated to the virus, while others are calling for up to $500 billion in additional aid, which Republican leaders are so far resisting.

Kennedy said he urged Trump to "visit" with Senate Majority Leader Mitch McConnell in the hopes of securing the Kentucky Republican's support for the measure.

"We got a very positive reception -- let me put it that way," Kennedy told CNN.

The bill would allow states and cities to use the funding provided by the stimulus law for operating expenses not tied to the coronavirus, while prohibiting the money from being used on shoring up pension accounts.

Kennedy tried to advance his proposal in the Senate last week but it was blocked by Republican Sen. Rick Scott of Florida. Afterward, he said he called White House chief of staff Mark Meadows and the President's son-in-law and senior adviser Jared Kushner to pitch them on the idea.

Returning from the White House, Republican Sen. Tim Scott of South Carolina said he supports "more flexibility" but also wants "guardrails" over how the money is spent.

Republican Sen. Cory Gardner of Colorado, who faces a difficult reelection, backs an additional $500 billion for states and cities, but he declined to say if he thought Trump would get behind it.

"I thought it was a good meeting," Gardner said.

Next relief package would build on earlier aid measures

Democrats and Republicans along with the Trump administration have so far come together on a bipartisan basis to negotiate and pass three relief packages as well as a measure that lawmakers referred to as an interim aid package passed after a program to help keep small businesses afloat during the crisis ran out of money.

But there are a number of potential significant sticking points to any bipartisan agreement on another round of emergency funding.

Senate Republicans have argued that liability reforms to protect employers from a rash of lawsuits would need to be included in any upcoming legislation, a demand Democrats have balked at.

Asked about McConnell's priority to include liability protections for businesses in any new coronavirus relief bill, Hoyer pushed back on the idea.

He said he is disappointed Democrats and Republicans have not reached an agreement on proxy voting, although party leaders continue to work for a deal.

This story has been updated to include additional information and reaction.