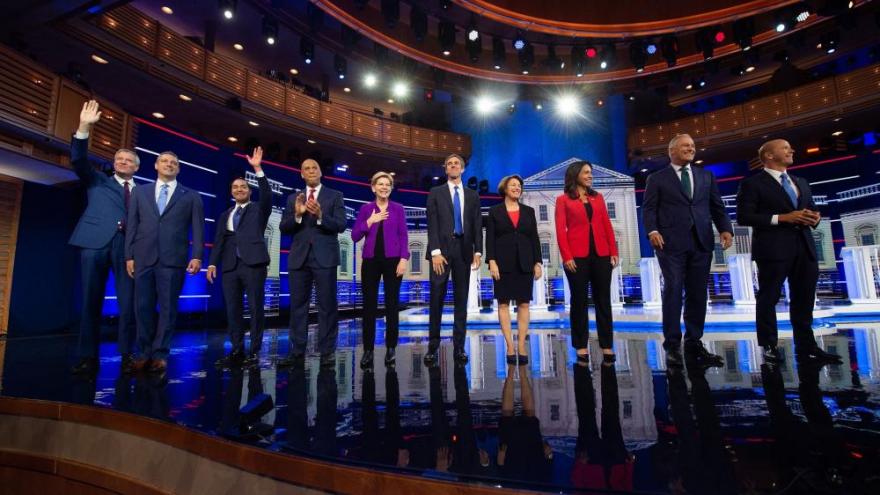 Wednesday's debate will be followed by another showdown on Thursday night.

(CNN) -- The first Democratic presidential debate was loud. It was crowded. It was often hard to follow. But when 10 of the presidential candidates met on stage in Miami, they did their best to break through the noise with emotional appeals on their core issues as they attempted to introduce themselves to the nation.

In a debate that illustrated the cacophony that results from a field of presidential aspirants that includes more than 20 people, Elizabeth Warren touched off the debate with a succinct critique of the nation's economic system as rigged to help the rich and powerful. It was the beginning of a smooth and even performance that was expected of the frontrunner on the round one stage.

The surprise of the night, however, was Julián Castro, who has struggled to register in the polls but broke through with an impassioned argument on what should be done on immigration and fierce attack on his fellow Texan, former Rep. Beto O'Rourke.

A short time later, O'Rourke -- who surprised the audience by speaking in fluent Spanish in his very first answer -- became Castro's central target as he answered a question about what he would do on his first day in office to help migrants seeking asylum.

At that point Castro began repeatedly interrupting O'Rourke, chiding him for not pressing with greater urgency for dramatic changes to immigration laws, until the moderators admonished him to let O'Rourke finish.

"The reason they are separating these little children from their families is they are using section 1325 of the (Immigration and Nationality Act), which criminalizes coming across the border, to incarcerate the parents and separate them. Some of us on this stage have called to end that section, to terminate it. Some, like Congressman O'Rourke, have not," Castro said. "I just think it's a mistake, and I think if you truly want to change the system that we've got to repeal that section."

In a pointed jab, Castro went on to challenge O'Rourke's policy depth: "If you did your homework on this issue then you would know that we should repeal this section," Castro said to his Texas rival.

RELATED: Your guide to the first Democratic debate

At the end of the debate, Castro underscored his breakout performance by circling back to his family's immigrant background, noting that his presence on the stage "shows the progress of America." In 2020, he said to laughter, "We'll say adios to Donald Trump."

The lineup, determined through a drawing by NBC once candidates met the Democratic National Committee criteria, placed Warren, the Massachusetts senator, at the center of the stage in this first round and she held her own throughout the night.

Warren and her ideas dominated the early part of the debate. She was pressed to defend the cost of some of her most expensive ideas -- like forgiving student loans to reduce the debt of college students -- in the very first question.

Moderator Savannah Guthrie noted that more than two-thirds of Americans believe the economy is doing well and could conclude that the change required by some of Warren's ideas could put the economy at risk.

It was an easy opportunity for Warren to deliver her central message that the current tax structure helps the rich, while putting average Americans at a disadvantage.

Minnesota Sen. Amy Klobuchar, who has said that she wishes she has a magic wand to get rid of all student debt but sees that as an unreasonably expensive proposition, was given the opportunity to go after Warren directly in the question that followed. However, the Minnesotan declined the opportunity to go directly after her Senate colleague.

"We know that not everyone is sharing in this prosperity and Donald Trump just sits in the White House and gloats about what's going on when you have so many people that are having trouble affording college and affording their premiums," Klobuchar said. "So I do get concerned for paying for college for rich kids. I do."

"But I think that my plan is a good one, and my plan would be, to first of all, make community college free, and make sure that everyone else besides that top percentile gets help with their education. ... If billionaires out there can pay off their yachts, students should be able to pay off their student loans."

For many months, New Jersey Sen. Booker has struggled to stand out despite the high expectations for his candidacy. But he delivered a strong performance on Wednesday night, speaking in Spanish at certain points in the debate and noting his work on justice reform and the rights of the LGBTQ community.

Perhaps his strongest moment though was when he talked about his personal connection to gun violence and his decision to move into an inner city neighborhood in Newark.

"I hear gunshots in my neighborhood," Booker said. "I hope I'm the only one on this panel here that had several people shot in their neighborhood just last week... For millions of Americans this is not a policy issue. This is urgency.... I'm tired of hearing people (say) all they have to offer is thoughts and prayers.... It is time we have bold actions and a bold agenda. I will get that done as President of the United States because this is not about policy. This is personal."

Klobuchar drew applause when she touted her record working on abortion rights.

"There's three women up here who have fought pretty hard for a woman's right to choose," Klobuchar said to loud applause.

The Minnesota senator also drew some laughs from the crowd when she went after Trump for conducting foreign policy by tweet.

Rep. Tulsi Gabbard of Hawaii was, like Castro, a candidate whose campaign was in need of a break out moment in Wednesday's debate. And she got one when she slapped down Ohio Congressman Tim Ryan for saying that the US should stay engaged in Afghanistan.

The former member of the Hawaii Army National Guard said that argument was unacceptable. "Is that what you will tell the parents of those two soldiers who were just killed in Afghanistan? 'Well, we just have to be engaged.' As a soldier I will tell you that answer is unacceptable. We have to bring our troops home from Afghanistan. We are in a place in Afghanistan where we have lost so many lives," she said. "We are no better off in Afghanistan today than we were when this war began. This is why it's so important to have a president, a commander in chief who knows the cost of war and is ready to do the job on day one."

Ryan replied that he wished the US didn't have to be engaged, but if not "the Taliban will grow" and will lead with bigger, bolder terrorist attacks. "We've got to have some presence there," he said.

Gabbard, the only veteran on stage, also criticized Trump's "chicken-hawk" cabinet, for leading the nation to "the brink of war with Iran."

She noted that she served in the war in Iraq: "What people need to understand is that this war would be far more costly, far more devastating than anything that we ever saw in Iraq. It would take many more lives. It would exacerbate the refugee crisis, and it wouldn't just be contained within Iran -- this would turn into a regional war. This is why it's so important that every one of us, every single American stand up and say 'No war with Iran.'"

In his own attempt to have a standout moment, O'Rourke tried to appeal to broad audience as he went back and forth in Spanish and English: "We need to include each person in the success of this economy. But if we want to do that, we need to include each person in our democracy. Each voter, we need the representation, and each voice, we must listen to."

But he was the target, not only of Castro, but also of New York Mayor Bill de Blasio, who criticized O'Rourke for his approach to health care. After O'Rourke said he backed a plan that would allow Americans to opt into Medicare but would preserve a role for private insurance, de Blasio pounced.

"Private insurance is not working for tens of millions of Americans," the New York mayor said.

Former Maryland Rep. John Delaney jumped in on O'Rourke's side. "I think we should be the party that keeps what's working and fixes what's broken," he said.

Wednesday's debate will be followed by another showdown on Thursday night. In that debate, former Vice President Joe Biden, Vermont Sen. Bernie Sanders and two other strong contenders -- California Sen. Kamala Harris and South Bend Mayor Pete Buttigieg -- will take the stage for their matchup.