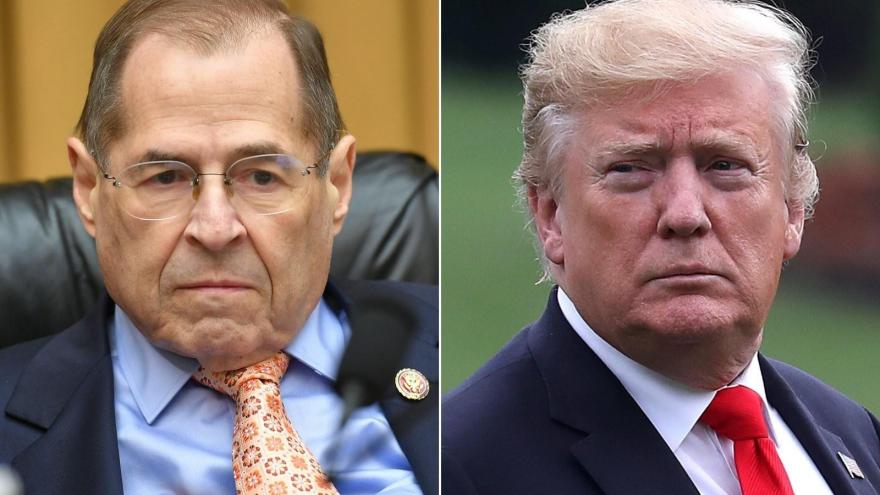 (CNN) -- The House Judiciary Committee is setting a deadline of December 6 for President Donald Trump to decide whether his attorneys will participate in the committee's impeachment proceedings against him.

House Judiciary Chairman Jerry Nadler, a New York Democrat, sent Trump a letter Friday with the new date asking if the President's counsel plans to request witnesses or make a presentation as part of the proceedings.

That deadline is later than the Sunday one the White House was previously given to say whether it will participate in the committee's first impeachment hearing on Wednesday.

The letter to the President and a separate letter sent to Judiciary Committee ranking Republican Doug Collins of Georgia were largely technical, referring to the rules established by the House's impeachment resolution last month. But the letter starts the clock for the White House to decide if it will take part in the House's impeachment proceedings -- which Trump and congressional Republicans have claimed are unfair -- or wait until a potential Senate trial to make its case directly to Congress.

While a final decision hasn't been made, the latest thinking inside the White House is that it likely won't send an attorney to the first judiciary hearing next week, according to two officials. The White House is also still considering suggesting witnesses who should be called for the hearing.

Trump and his team are debating the merits internally of how to respond to the request — including whether it would be "worth it" to participate, one person close to the process said.

After a two-month investigation capped by two weeks of public hearings, the House Intelligence Committee is preparing a report to submit to the Judiciary Committee that will detail allegations that the President pressured Ukraine to investigate his political rivals while withholding a White House meeting and $400 million in security aid.

The report will serve as the basis for the Judiciary Committee's impeachment proceedings, which are expected to focus heavily on Ukraine. But the Judiciary Committee's letter also noted the panel's own investigation related to allegations of obstruction of justice from former special counsel Robert Mueller, which some Democrats want to be included in potential articles of impeachment against the President.

The Judiciary Committee's first hearing on Wednesday — on "Constitutional Grounds for Presidential Impeachment" — is expected to kick off a frantic month of activity in the House. The Judiciary panel is expected to hold multiple public hearings and then consider articles of impeachment, which it would approve to set up a possible House floor vote before Christmas that could make Trump just the third president in US history to be impeached.

Under the House-passed rules, the President's counsel can participate in the impeachment hearings in the Judiciary Committee, unlike the public hearings earlier this month in the House Intelligence Committee.

The rules state that the President and his counsel are invited to attend committee presentations of their evidence, as well as ask questions, raise objections, request witnesses or other evidence and make a concluding presentation.

The participation, however, is subject to Nadler's discretion, and Democrats included a clause stating that if the White House obstructs the investigation -- such as by not making witnesses available -- then Nadler could block it from calling its own witnesses.

Nadler's letter to Collins offered him the ability to request subpoenas for witnesses, though Nadler can deny those requests.

In the House Intelligence Committee, Democrats blocked a number of requested subpoenas, including those related to Vice President Joe Biden's son Hunter and the whistleblower whose complaint sparked the Democratic impeachment inquiry into Trump and Ukraine.

This story has been updated to include additional developments Friday.