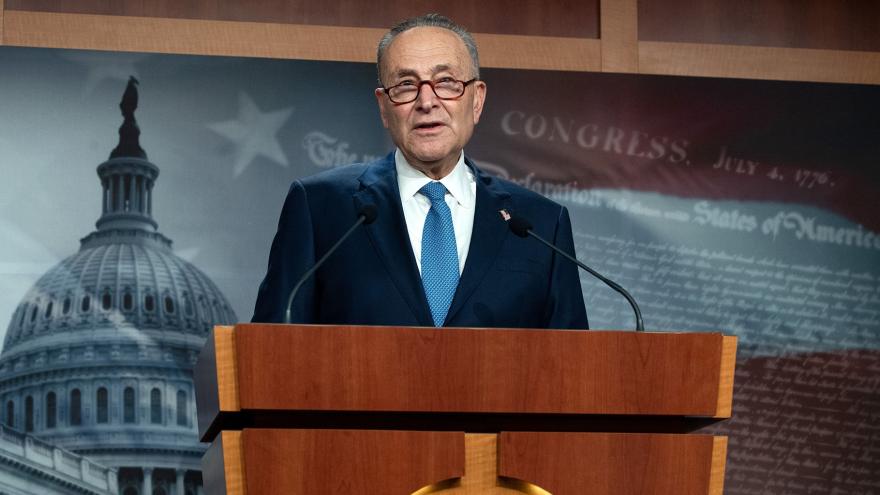 Senate Minority Leader Chuck Schumer, seen here at the US Capitol in Washington, DC, January 6, says the House will send the impeachment article to the Senate on January 25.

(CNN) -- The second Senate impeachment trial of former President Donald Trump is scheduled to begin on February 9 after Senate leaders reached a deal to push it back, giving Trump's legal team more time to prepare and Senate Democrats a chance to consider Covid-19 legislation and to confirm President Joe Biden's Cabinet.

House Democrats will formally walk over the single article of impeachment against Trump to the Senate on Monday evening, but the agreement between Senate Majority Leader Chuck Schumer and Senate Minority Leader Mitch McConnell will push back the substance of the trial until February. Without an agreement, the trial would have started the afternoon after the article was transmitted to the Senate.

"We have made good progress in our efforts to determine the timing and structure of the impeachment trial of Donald J Trump," Schumer said Friday evening announcing the trial schedule, saying it would begin the week of February 8.

Under the agreement, the ceremonial functions of the trial will occur next week, with the articles being presented on Monday and senators being sworn in as jurors on Tuesday. Then the trial will pause, while the House impeachment managers and Trump's legal team exchange pre-trial briefs for two weeks. The final briefs would be due on February 9, allowing the trial itself to begin.

A delay to the impeachment trial also makes sense for Democrats because the trial had threatened to stall the confirmation of Biden's Cabinet, as well as put a stop to any consideration of another Covid stimulus package, as Senate Republicans said Friday they would not allow the Senate to confirm nominees at the same time the trial is going on. The trial's timing had been one of several logistical hurdles the Senate is tackling amid broader negotiations between Schumer and McConnell over how the 50-50 Senate will be governed.

McConnell had proposed delaying the trial until early February, arguing that Trump's legal team should be given ample time to prepare after the House's swift impeachment of Trump for "incitement of insurrection" earlier this month. The timeline Schumer announced Friday evening is one week earlier that what McConnell had proposed, but the Kentucky Republican's team praised the agreement Friday." This is a win for due process and fairness," said McConnell spokesman Doug Andres.

The length of the trial is still an open question and will depend both on whether the House impeachment managers seek to call witnesses and the length of senators' questions for the legal teams. But sources say most believe the trial will be shorter than the three-week 2020 impeachment trial for Trump.

The timing for the trial had remained unsettled on Friday morning as the negotiations continued between Senate leaders. On Friday morning, Schumer and House Speaker Nancy Pelosi said the House would transmit the impeachment article to the Senate on Monday, in effect setting a deadline for the Senate to cut a deal on the trial timing.

"We are respectful of the Senate's constitutional power over the trial and always attentive to the fairness of the process, noting that the former president will have had the same amount of time to prepare for trial as our Managers," Pelosi said Friday. "Our Managers are ready to begin to make their case to 100 Senate jurors through the trial process."

Republicans made clear Friday that Biden's agenda would have been frozen until the Senate finished the trial, had it taken place next week.

Cornyn said Republicans haven't given consent to bifurcate the trial days to take up nominations during the trial. "No, it's not gonna happen," he said.

Alaska Sen. Lisa Murkowski, considered a swing GOP vote, said Friday that the process "has to be fair."

"My thought process is to see what happens as this unfolds," she said. "You know, we learned this morning that Speaker Pelosi is going to transmit the article on Monday. As I understand, right now, there hasn't been an agreed-to schedule on the pre-trial. I think what McConnell laid down was eminently reasonable, in terms of making sure that we got process. Got to have process and the process has to be fair. So yeah, so we've got to get started, I guess."

"We need to move past this," a Biden official told CNN. "The only way for that to happen is for the trial to begin."

But Biden said at a White House announcement Friday that he saw the upside to waiting on the trial. "The more time we have to get up and running and meet these crises, the better," he said.

'It will be a full trial'

A faction of Senate Republicans has argued that the impeachment trial would be unconstitutional because Trump has already left office. It's an argument that Sen. Lindsey Graham, a South Carolina Republican, has suggested Trump's legal team should adopt.

"I think it's obvious that the post-presidential impeachment has never occurred in the history of the country for a reason, that it's unconstitutional, that it sets a bad precedent for the presidency and it continues to divide the nation," Graham said Friday.

But Schumer pushed back on that argument, noting that both liberal and conservative legal scholars have said there is precedent for an impeachment trial of a former official.

"The Senate will conduct a trial of the impeachment of Donald Trump," Schumer said. "It will be a full trial. It will be a fair trial. But make no mistake, there will be a trial, and when that trial ends, senators will have to decide if they believe Donald John Trump incited the insurrection against the United States."

McConnell said Friday that the Senate should give Trump a "full and fair process" to mount his impeachment defense.

"This impeachment began with an unprecedentedly fast and minimal process over in the House. The sequel cannot be an insufficient Senate process that denies former President Trump his due process or damages the Senate or the presidency itself," McConnell said. "Senate Republicans strongly believe we need a full and fair process where the former president can mount a defense and the Senate can properly consider the factual, legal, and constitutional questions at stake."