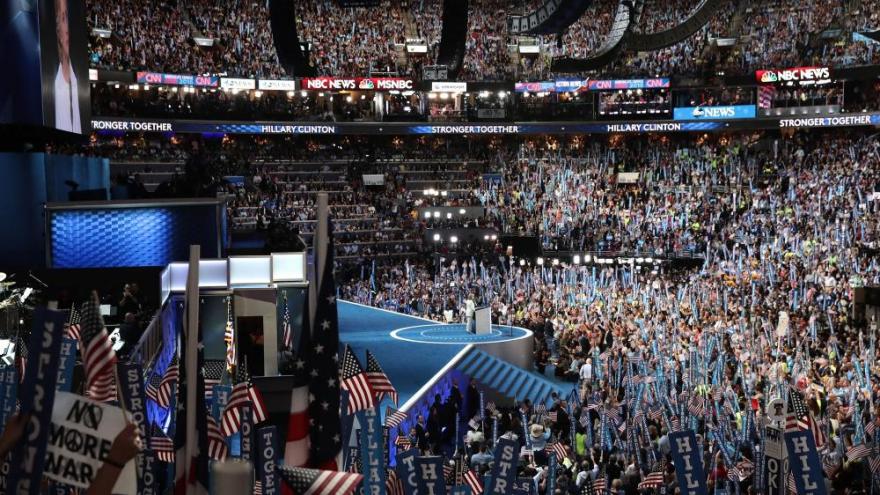 Democratic presidential candidate Hillary Clinton acknowledges the crowd at the end on the fourth day of the Democratic National Convention at the Wells Fargo Center, July 28, 2016, in Philadelphia, Pennsylvania.

(CNN) -- Democrats tasked with organizing the party's presidential nominating convention this year informed state parties and convention delegates on Friday that they will allow for nearly two weeks of virtual voting ahead of the August convention, a move that further paves the way for a Democratic gathering unlike any other.

The announcement also highlights the growing divide between the way Democrats and Republicans are approaching their conventions as the coronavirus pandemic continues to spread in the country. Where Democrats -- led by former Vice President Joe Biden -- have significantly scaled back their convention in Milwaukee and moved to virtual voting, Republicans -- led by President Donald Trump -- moved their convention to Jacksonville after North Carolina's Democratic governor could not guarantee he would allow a full-fledged, large-scale convention in Charlotte, North Carolina.

Jason Rae, the Secretary of the Democratic National Committee, informed all certified delegates in a letter on Friday that voting on convention business will take place from August 3-15, with each delegate receiving a ballot specifically tailored to the delegate via "individualized and series identifiers." The plan was also conveyed to Democratic leaders from all 50 states on a call Friday between top DNC officials and members of the Association of State Democratic Committees.

"Given the pandemic, the (Democratic National Convention Committee) has developed a voting system that will allow convention delegates to safely and securely cast ballots for all required votes. Each delegate will be sent an individualized ballot with unique identifiers via email," reads Rae's letter. "During the voting period, each certified delegate will receive a ballot and directions for completing and returning the ballot electronically."

The process, according to the letter, will work like this: A delegate will fill out their ballot, which will includes questions about the Democratic platform and the party's nominee, and send it to their state's Democratic Party. Once a state party has all the ballots from their delegation, the state delegation's chair "will submit a tally sheet to the Secretary's Office that formally records the number of votes cast on each item of convention business," Rae's letter reads. The votes will be counted all at once on August 15, not as they come in.

Past conventions have featured fights on the convention floor about certain controversial topics and amendments to the party's platform. Virtual voting -- and the fact that most delegates will not be in Milwaukee -- all but guarantees that those fights won't happen, another example of how singular this convention will be.

Officials representing the campaigns of Biden and Vermont Sen. Bernie Sanders, the two top candidates who won delegates during the Democratic primary, also plan to host webinars with their delegates in the coming days to go over the changes, Rae said.

Changes to this process, which is primarily a forgone conclusion because Biden is the only Democrat with delegates left running for president, mean the Democratic Party will know that tally of nominating votes for Biden by the time the convention begins on August 17.

Democrats made these changes possible earlier this year, as the ongoing pandemic made it clear that a traditional convention with thousands of people in one arena would not be advisable. In May, the party's Rules and Bylaws Committee approved a resolution providing convention organizers more authority for decision on alternative ways delegates could vote.

The party later officially told delegates in late June that they would be significantly scaling back their convention and advising state delegates not to plan to travel to Milwaukee due to the ongoing coronavirus pandemic. This announcement all but guaranteed that the Democratic gathering, which they were dubbing a "Convention Across America," would be far different than any event in the party's history.

Because the bulk of the convention will happen virtually, depriving delegates of the chance to tell their stories and interact with other Democrats from across the country, convention planners are building a so-called "content hub" for delegates to "share their stories and engage with their fellow delegates," according to organizers.

Delegates will be invited to upload videos of themselves describing why they ran to be a delegate and what they are hoping for if Biden is elected president.

"Our Democratic delegates represent the values that unite our party and reflect the extraordinary diversity of the American electorate, and this hub will have a variety of engagement tools for delegates to get involved with the convention," said Katie Peters, the top spokesperson on the Democratic committee planning the convention.

Republicans, by comparison, have moved full speed ahead with plans to host an in-person convention, something Trump has made clear both publicly and privately that he wants.

But the recent surge in coronavirus cases in Florida has created a round of headaches for Republicans tasked with putting together the in-person event. Convention organizers, in response to the virus, have said they would test Jacksonville convention attendees daily for the coronavirus but have not provided details about the testing protocols. The gathering is slated for August 24-27, with Trump likely to deliver his acceptance speech on the last day if organizers stick to the original convention schedule.

"The RNC is committed to holding a safe convention that fully complies with local health regulations in place at the time," Michael Ahrens, a Republican National Committee spokesman, said about their event. "The event is still almost two months away, and we are planning to offer health precautions including but not limited to temperature checks, available PPE, aggressive sanitizing protocols, and available Covid-19 testing."

Convention planners said on Thursday that they were considering moving the main events of the Republican National Convention outdoors as coronavirus cases increase in Florida, given health experts believe outdoor events reduce the risk of transmission and could make attendees feel safer.