Democrats push to close the deal on Biden's agenda: 'This part of the process needs to be handled with care' 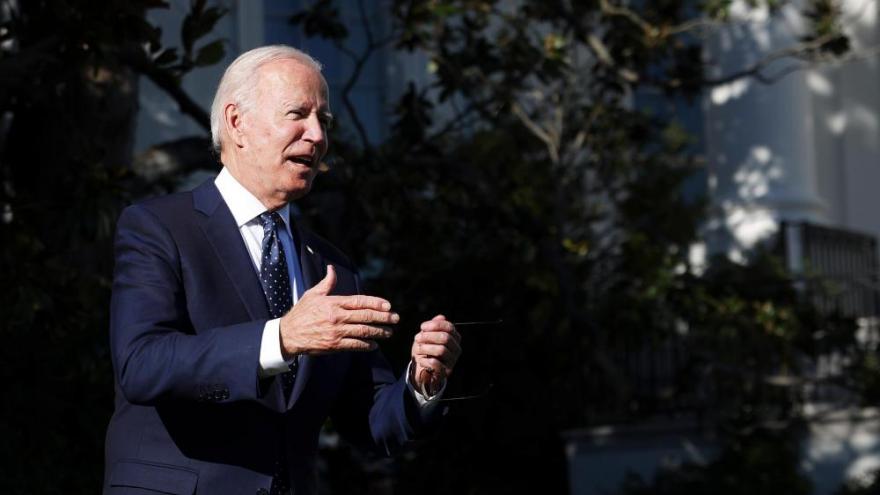 Many Democrats on Capitol Hill had made clear their preference in cutting back the Build Back Better plan was to shrink the number of programs included -- not the funding. President Joe Biden is shown here at the White House on October 18, 2021 in Washington, DC.

(CNN) -- Democrats aren't there yet on cracking a deal on a President Joe Biden's sweeping, if now scaled back, economic and climate package. But the over the course of the next 36 hours, those involved in these talks think it is possible to get at least one of the two Senate moderates to sign off on a final and detailed framework.

That wouldn't get them to the finish line, but it would be designed in a way that would secure backing of progressives and moderates in the party and -- while more modest than once hoped-- be defined by sweeping changes to the kind of benefits American families can depend on.

It's not a secret who that one senator is: Sen. Joe Manchin, a West Virginia Democrat. It's not a secret who that one senator isn't: Sen. Kyrsten Sinema. The Arizona Democrat "is still very much a work in progress, and depending on the day we don't know what the work entails," one Democrat involved in the talks told CNN. But if Biden and Democrats can lock in an agreement with Manchin, there is a growing sense that it would be helpful in pressing Sinema to an agreement. At least in theory.

The bottom line is that efforts to convince Manchin are and have been moving in the right direction for days now, with the senior senator engaged in a barrage of meetings around the clock on his outstanding concerns over Medicare expansion, means testing for various programs and of course, the very sticky issue of how to ensure the climate provisions in the bill will actually lead to the US' goal of reducing emissions.

Democrats aren't there yet. The issues of what is actually included in this bill is still a work in progress and the very large and real problem of how to pay for it is rearing its ugly head.

Aides on Capitol Hill are very cognizant of the President's CNN town hall on Thursday night, pointing out that pulling together a framework ahead of it would give Biden something to point to in terms of progress after weeks of stories and headlines about the bitter infighting within his own ranks. The forum isn't a hard deadline by any means, but as one aide put it to me, it does set up "a nice opportunity for something" even as no one knows exactly what that would be at this point.

It should also be noted that final proclamations about a "framework" or "agreement in principle" at this moment should be looked at critically and carefully. Remember the agreement in principle on how to pay for the bill weeks ago? It was hardly an agreement at all. It's not to say that progress isn't happening, but the question is how to define it. To some degree the most tangible definition would be: Do progressives view it as enough to allow a vote on the infrastructure bill by next week?

One thing that has shifted significantly -- by design -- in the last 72 hours has been Biden's approach.

Through dozens of meetings and calls over the course of the last several months, he served as equal parts listener and explainer, cheerleader and extoller of the virtues of the package and its potential effect on districts, states or -- most often -- the fate of the country.

There was sounding out of where members stood and clear efforts at times to nudge them toward a specific direction, but one thing he rarely did was reveal exactly where he stood.

That has now changed, and it's not by accident.

The combination of a closing time window, with progress made in the talks with Manchin, led to the decision this week to accelerate the process, officials said. It was a shift discussed and agreed upon with House Speaker Nancy Pelosi and Senate Majority Leader Chuck Schumer, who have continued to press their members to reach a framework agreement by the end of the week.

Biden also communicated that he would be doing just that in private conversations with both Manchin and Sinema, one of the officials said.

For all of the talk of Biden's congressional know-how, skill, savvy and innate sense of how members operate, this is the moment that makes or breaks his entire effort.

This is the moment to close.

For all of the momentum that came out of Tuesday, so did the reality that was long looming: Lawmakers' priorities were going to be cut. And they weren't going to appreciate it -- at all.

White House officials both knew this moment was coming and, in large part, think the problems are either solvable or just represent teeth gnashing before the inevitable acceptance.

But this is a very tenuous moment -- any one member can send this effort spiraling. As one official put it: "This part of the process needs to be handled with care, and we know that."

Speaking of handling with care

The question bouncing around more frequently at this moment, given the progress made with Manchin: "Would Kyrsten Sinema single-handedly blow up Biden's entire domestic agenda?"

The calculation from most as they try to game that out is no. Sinema has made clear to the White House and to some colleagues that she wants to get to yes and will figure out a way to do so through her intensive talks with White House officials.

But if she's not there yet, and everyone else is -- what would she do if Democratic leaders move forward anyway?

The biggest open-secret bombshell to blow into public view on Wednesday was the fact that Sinema is standing right in the middle of Democrats' long-held plans to pay for this bill.

Fully paying for this wasn't a requirement early on, but moderates have pushed for it, the White House has obliged and tax writers have been working for months to find a way to deliver that.

Sinema's position on taxes isn't new. The Arizona senator has quietly been digging in on her reluctance to increase the corporate tax rate and the individual rate for months. What has changed is the long-held belief that eventually Sinema would move off of that position and be amenable to some modest increases as talks intensified. She hasn't, and it has sparked deep concern within the Democratic ranks in recent days that it is quite possible Democrats will need to find entirely new avenues to pay for their bill.

Biden nodded to this during his meeting with moderates Tuesday, according to one person familiar with the conversations, making it clear that this wasn't just a potential problem, it was a real and present one.

It's possible that Sinema's position in the closing days of these negotiations could shift, although it's not likely she will ever support an increase of the corporate rate up to 25% as Manchin has signaled he'd agree to. But waiting for Sinema to change her mind is a gamble when every Democratic vote in the US Senate is needed.

As one Democratic aide put it on Wednesday, the scale and calamity of Sinema's position isn't fully appreciated yet within Democratic ranks. The options for paying for this legislation without raising the corporate tax rate -- which has become a key tenet of Democratic messaging over the last several years -- or a collection of taxes on wealthy individuals is limited.

Right now, Democrats are leaning into proposals to increase taxes on companies that issue stock buybacks as wells as looking at ways to boost Internal Revenue Service enforcement, strengthen the international tax system, create a corporate minimum tax for businesses that operate overseas and increase taxes on billionaires by targeting their assets.

But, aides point out that it is still not clear that collection of pay-fors can fully cover the cost of the Democratic bill right now even at its shrunken size.

In the race to finish the bill

At this point, Democratic members on the Capitol Hill are feeling that they are much closer to clinching Manchin's vote. White House officials involved are very much of the same view. That creates the potential for a new avenue to get Sinema on track -- very clear pressure and isolation that could lead the Arizona Democrat to make some concessions and soon to get the bill finished.

The other big challenge

For weeks, many Democrats on Capitol Hill had made clear their preference in cutting back the Build Back Better plan was to shrink the number of programs included -- not the funding, not how long they ran for, but simply to reduce the number of new programs created in the bill. "Do a few things well" is how it was summed up time and time again.

It seemed the White House was attracted to that strategy too, according to multiple aides working closely with them. But the practicality of that idea has gone out the window as the scramble to get 50 Senate votes and almost all of the House Democratic caucus has intensified. Everyone likes the idea of doing a few things well until individual Democrats realize their thing may not make the cut.

Now there is a new emerging fear from many Democrats who survived the roll out of Obamacare, or who watched the early issues with the Paycheck Protection Program, that debuting new government programs is risky and difficult especially in an election year. When you go through the list of what Democrats are proposing here, it is going to require massive amounts of implementation on top of what already was a scaled-up government effort to get relief money out the door from the Covid stimulus bills.

Think about, from an implementation perspective, what Democrats are seriously considering doing right now: