Democrats introduce bill to raise minimum wage to $15 by 2025 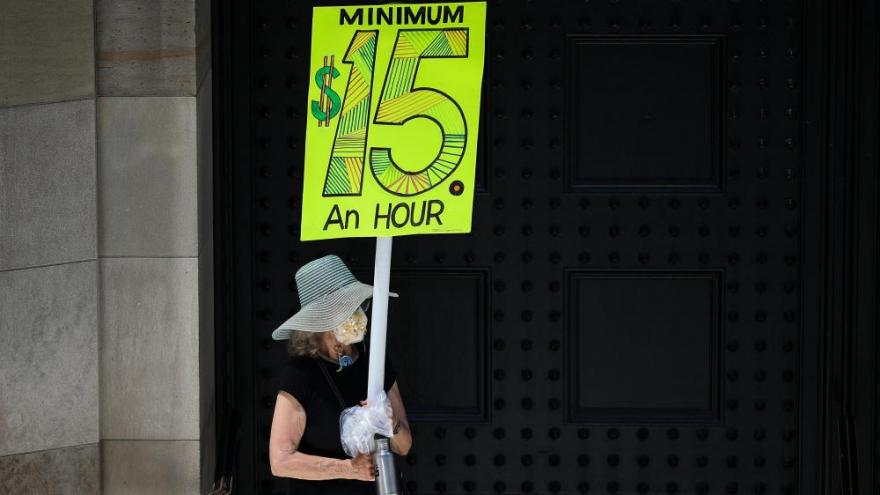 A group of BLM demonstrators protest the Federal Reserve Bank about $15 minimum wage in NYC to solidarity nationwide in Lower Manhattan at the financial district in New York, United States on July 20, 2020.

(CNN) -- Seeking to fulfill a long-standing Democratic ambition, a coalition of lawmakers introduced a bill on Tuesday that would raise the national minimum wage to $15 an hour.

The measure, which is also included in President Joe Biden's $1.9 trillion relief package, calls for gradually increasing the hourly wage in increments until it hits $15 in 2025. After that, it would be indexed to median wage growth -- a move meant to guarantee wages keep up with inflation without needing new legislation.

Democratic lawmakers have pushed for years to raise the minimum wage, which now stands at $7.25 and hasn't been increased since 2009.

President Barack Obama pressed in his 2013 State of the Union address to bump up the hourly rate in stages to $9 an hour over two years, and state and local governments around the country have done just that. Voters have consistently approved even bigger minimum wage hikes when they appear on the ballot -- most recently in Florida, where voters supported a $15 minimum wage in November.

But the legislative drive has stalled in Congress, where Democrats were in the minority in either the House or Senate, or both, from 2010 until this year.

Now, with narrow majorities in both chambers and Biden in the White House, Democrats are renewing the push.

Initially, Democratic leaders have said they will seek to pass the measure with at least some Republican support.

Failing that, they will need to either end the Senate's legislative filibuster -- which requires 60 votes for a bill to get an up-or-down vote -- or use budget reconciliation, an arcane but frequently used process that allows legislation that affects the federal deficit to be enacted with a simple majority. If Democrats go that route, they could not afford to lose a single vote.

How it could pass

"If we cannot get enough Republicans to vote for this legislation under regular order, we cannot simply take no for an answer," Vermont independent Sen. Bernie Sanders said on Tuesday. "We must raise the minimum wage to $15 an hour, either through budget reconciliation, by a simple majority vote in the Senate. And as the incoming chair of the Senate budget committee, that is exactly what I will be fighting to do."

Asked how a raise to the minimum wage would qualify under the reconciliation rules, a question that has been a point of outside contention, Sanders and others pointed to the law's potential knock-on effects. Specifically, he argued that many workers currently depending on some forms of federal assistance would no longer need it, which would reduce government spending and "have a very positive impact on the federal deficit."

Sanders also expressed confidence that the bill, with 38 Democratic co-sponsors in the Senate, would garner enough votes to pass through the simple majority, reconciliation process.

The Vermont independent first introduced a $15 minimum wage proposal in 2015 and then reintroduced with Washington Democratic Sen. Patty Murray in 2017 and 2019. The House passed a bill to do in 2019, but it did not make it through the Senate.

The so-called Fight for $15 dates back to 2012, when fast-food workers walked off the job in New York City to call attention to their battle for higher pay.

Backed heavily by unions and consumer advocates, the effort has succeeded in eight states and more than 40 cities, which have adopted laws to raise their minimum wage to $15. A growing number of companies, including Amazon and Target, agreed to lift their minimum wage to that level in recent years as unemployment fell to historic lows -- before the pandemic struck.

But the movement to raise the minimum wage -- by any amount -- has faced steep opposition from Republicans and businesses, particularly restaurants and other smaller employers, who often operate on tight profit margins. They argue that boosting wages will force them to lay off workers.

The economic impact of a higher wage has been hotly debated among economists for years, with left-leaning experts countering that increasing salaries will allow workers to spend more and lift businesses and the economy.

Since 1968, the minimum wage has lost more than 30% of its purchasing power, according to a fact sheet distributed by lawmakers.

Sanders has been a longtime proponent of boosting the wage, saying no full-time worker in the US should be unable to afford to feed their families or pay the rent. He has slammed companies for paying wages that are so low that their workers need federal assistance, including food stamps.

"The $7.25 an hour federal minimum wage is a starvation wage," said Sanders, who introduced the bill Tuesday along with Washington Sen. Patty Murray and Reps. Bobby Scott of Virginia, Pramila Jayapal of Washington and Stephanie Murphy of Florida. "In the United States of America, a job must lift workers out of poverty, not keep them in it."

The legislation would raise the wages of nearly 32 million workers, more than half of whom are essential workers, according to Scott, citing legislation from the left-leaning Economic Policy Institute.

It would increase wages for one-third of all Black workers and one-quarter of Hispanic workers. Also, nearly 60% of those helped would be women.

"The minimum wage today is one of the clearest examples of how weak labor standards can impose constant unrelenting hardship on millions of workers and their families," said Scott, noting one in nine full-time, year-round workers is paid a wage that leaves them in poverty.

The coronavirus pandemic has shined a light on the financial struggles of low-wage Americans, many of whom are essential workers and have been hit hard by the outbreak. Those making the minimum wage are typically younger and work in the leisure and hospitality sector, which has suffered from steep job losses amid state lockdowns since the pandemic began.

Support in the White House

The shift in control of the agenda in Washington has quickly moved what was, in effect, a bill meant to signal Democratic intentions into the realm of the possible.

"Last session, the people's house, with Chairman Scott and Speaker [Nancy] Pelosi in the leadership passed the 'Raise the Wage Act' and we're ready to do it again," Jayapal said, before noting what has changed. "And now, we have a President Biden who believes that we should pass a $15 minimum wage and a Senate led by Democrats ready to work for the people."

Biden has already started taking steps toward instituting a $15 minimum wage for federal workers and contractors, signing an executive order last week that begins laying the groundwork to do so.

"We have so many millions of people working 40 hours a week -- working -- and some with two jobs, and they're still below the poverty line," Biden said Friday.

The legislation also calls for gradually phasing out the sub-minimum wage for tipped workers, youth employees and workers with disabilities.