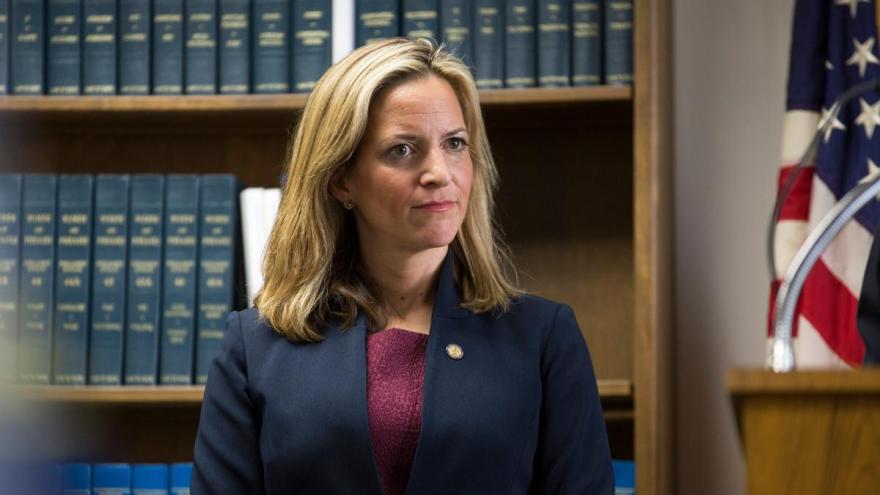 Michigan Secretary of State Jocelyn Benson, pictured here in Detroit in 2019, is seeking a second term this year.

(CNN) -- Democrats focused on secretary of state races this year have a warning for their party: If you think the aftermath of the 2020 election was troubling, 2024 could be even worse if we fail to invest in these campaigns.

As then-President Donald Trump fumed about his loss following the 2020 election, secretaries of state -- the top elections officials in their states -- were at the forefront of pushing back against his false claims of electoral fraud. While the unexpected new prominence has helped secretary of state candidates pull in more money and attention this cycle, some Democrats worry the party is not focused enough on these contests and, in turn, is risking chaos around the 2024 presidential election if a slew of Trump-backed, election-denying candidates are able to win and the former President follows through on his desire to run for the White House again.

"They do not recognize the will of the people. They refuse to accept the results of a free election," President Joe Biden said Thursday of "MAGA Republicans" in a Philadelphia speech on protecting democracy. "And they're working right now as I speak in state after state to give power to decide elections in America to partisans and cronies, empowering election deniers to undermine democracy itself."

Election deniers have won Republican primaries across the country -- including in states that will be central to the 2024 presidential election.

In Nevada, Jim Marchant, an unsuccessful congressional candidate in 2020, says that his No. 1 priority would be to "overhaul the fraudulent election system in Nevada" and that he would not have certified Biden's 2020 win in the state. In Arizona, state Rep. Mark Finchem has falsely claimed that Trump won the 2020 election, called for the arrest of Democratic Secretary of State Katie Hobbs and proposed widespread restrictions on voting in the state. And in Michigan, Kristina Karamo -- who has falsely claimed that Trump won the state in 2020 -- rose to prominence by alleging to have witnessed voter fraud as a poll challenger during the state's count of absentee ballots.

"Everything we do every single day to ensure the American people can elect, freely choose their election officials, is directly tied to January 6 and the far right and Trump's all-out assault on democracy," said Colorado Secretary of State Jena Griswold, the chair of the Democratic Association of Secretaries of State, referring to last year's attack on the US Capitol by pro-Trump rioters. "We believe that democracy literally is on the ballot."

To some Democrats, however, the party hierarchy has not fully grasped the threat of what election-denying candidates would mean as their state's top election officials.

"There has been improvement. Do I think it is enough? No," said Ellen Kurz, founder and president of iVote, a Democratic outside group focused on secretary of state races. "If I was running the (Democratic National Committee), I would make this the top priority. It's a no-brainer for me."

'A seismic shift' for secretary of state races

The 2020 election represented a high-water mark for prominence of the secretary of state position. The sitting President was calling out secretaries by name, including some Republicans, and urging his supporters to put pressure on these offices to refuse to certify elections in states he had lost.

In several states, the secretary of state is appointed by the governor, but the position is an elected office in a majority of states, albeit one that voters haven't usually prioritized. Both Republican and Democratic campaigns raised tiny sums compared with other statewide counterparts, and few aired ads on television.

That has shifted since the 2020 election and the January 6, 2021, insurrection at the US Capitol, reflected in fundraising by top secretary of state candidates and the Democratic Association of Secretaries of State.

An insurrection makes a difference. The aftermath of the 2020 election forced more Americans to recognize that our country is at a crossroads and our democracy is in peril," said Kim Rogers, executive director of the Democratic secretary of state group, noting that Trump's pressure campaign on state officials after his loss and the global pandemic have also contributed to the attention. "I think across the board, all of those factors culminated in people recognizing that secretaries of state are one of our last lines of defense. And people are paying attention now."

She added: "As a collective, 2020 really was a seismic shift in the focus on these races."

Nowhere was that clearer than at Rogers' group, which works to elect Democratic secretaries of state. At the start of 2022, the group reported that it had raised "$4.5 million in 2021; over $2 million more than reported in 2020 and $3 million more than in the entire 2018 cycle." As of late August, the group has raised $16 million this cycle.

And in some races, Democratic candidates for secretary of state have raised up to five times what they had collected in earlier elections.

Michigan incumbent Jocelyn Benson announced in August she had raised $2.1 million in 2022. At the same point in 2018, the candidate had only raised $134,000. In Minnesota, Democrat Steve Simon raised nearly $400,000 in 2021 for his reelection bid, more than three times what he raised in his 2018 campaign. Simon is running against Republican Kim Crockett, who said last year that changing the rules around voting following the 2020 "big rig" was "our 9/11."

A study by the liberal-leaning Brennan Center for Justice at New York University's law school found that candidates in the six biggest secretary of state races of 2022 -- Arizona, Georgia, Michigan, Minnesota, Nevada and Wisconsin -- had raised $16.3 million as of the start of August, more than double what hopefuls had raised at the same point in 2018. In Nevada alone, where Marchant is facing off against Democrat Cisco Aguilar, the two candidates raised $2.6 million this cycle through the end of June the report found, more than five times the total that secretary of state candidates had raised at the same point in 2018.

For top law enforcement officials in these states, the outcome of these races could be significant.

Aaron Ford, the Democratic attorney general in Nevada, has watched Marchant's rise with apprehension. Ford's office was involved in a lawsuit Marchant filed after the Republican's 2020 loss to Democratic Rep. Steven Horsford in Nevada's 4th District. The lawsuit claimed voter fraud but was dismissed.

"I know firsthand what it would be like to have someone in the office such as Mr. Marchant. It's not lost on me at all," Ford said, referencing the litigation after the 2020 election. If he were to win and worked to dispute the 2024 election, Ford added, "I could envision a scenario where that constitutional officer would be sued by my office. It is incumbent on me, the attorney general, to defend the Constitution of the United States and the state of Nevada ... especially when it relates to something as important as elections."

Ford is running for a second term this year. Marchant did not respond to CNN's request for comment.

More could be done

Even as money flows into these races, the total spending in these contests remain small, especially compared with races for governor and Congress, and there are concerns that national Democrats aren't doing enough.

"The reality of an election cycle is everyone is trying to focus on their level of the ballot," said a Democratic operative working on secretary of state races. While the operative acknowledged there has been a bump in attention on these contests as Democrats make the case that "democracy is on the ballot," more could be done.

"We welcome any additional support," the operative said.

Asked about their involvement in secretary of state races, a Democratic National Committee official did not detail any direct involvement but said the party "has been investing earlier and more robustly in the DASS battlegrounds, making direct investments in the coordinated campaigns and state parties that support Democratic candidates up and down the ballot in these targeted states."

The official noted that in Arizona, Nevada, Michigan and Georgia -- four of the Democratic secretary of state association's top targets -- the party has invested $11 million. The committee also transfers $12,500 to each state party every month to help with all campaigns, including down-ballot races.

Advocates for secretary of state races argue, however, that the impact of more money could be significant. While secretary of state contests have grown more expensive -- and many of the candidates are competing for crowded air time in states with other top-flight statewide races -- their cost still pales in comparison to other contests, allowing a little money to go a long way.

That's a lesson iVote, the Democratic group that exclusively focuses on secretary of state races in swing states, has learned since its founding in 2014. Its budget then was $4.5 million, a number that grew to $7.5 million in the 2018 cycle. For the 2022 cycle, the group plans to spend $15 million, double its spending from four years ago.

"There are these small races, down-ballot races that are going relatively unnoticed that will determine if we have a free and fair election," said Hari Sevugan, a senior adviser to iVote. "Because pro-democracy candidates won these seats in 2018, our democracy survived in 2020. Who wins these seats in 2022 will not only determine what the election looks like in 2024, but what our democracy looks like the day after."

Kurz, who has been involved in secretary of state races for years, echoed that sentiment, arguing that Democrats cannot ignore what some Republican nominees are saying they will do if they win.

"Let's just say one of these people win, and they refuse to certify the votes because they don't like the results," Kurz said. "It's a constitutional crisis if the election is close, as it usually is. So, how could there be anything more important than making sure that we get pro-voting advocates of free and fair elections into these offices?"

"What's more important than that?" she added.