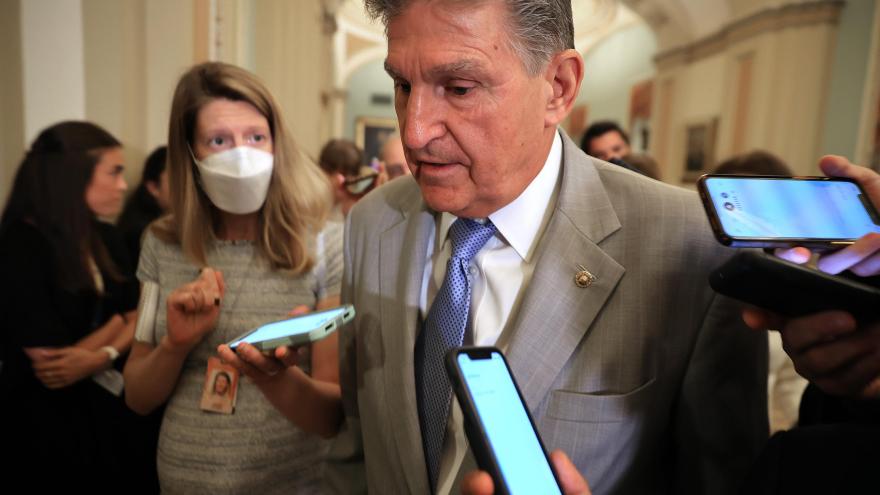 (CNN) -- A number of Democratic senators are growing increasingly wary of the administration's plan to repeal Trump-era pandemic restrictions on the US-Mexico border that effectively blocked migrants from entering the US, setting up a rare clash between President Joe Biden and some members in his own party.

Known as Title 42, the pandemic-era order allowed US border officials to turn migrants back to Mexico or their home countries immediately, citing a public health crisis. But, the authority -- which has stayed in place throughout Biden's presidency -- has also been blasted by immigration advocates and progressive members who argue it has endangered immigrants who otherwise would have been able to remain in the US while their asylum cases were being processed.

The Biden administration is expected to rescind the rule in May, but many Democrats on Capitol Hill fear it is not enough time for the administration to establish an adequate plan to handle the uptick in migrant crossings that's expected to come with it.

Sen. Joe Manchin, a moderate Democrat from West Virginia, told reporters Thursday that he thought the administration should rethink the decision entirely.

"I think we should reconsider" removing it, Manchin said, adding, "Maybe that would get us to spur us to get a good immigration policy that works for America, secure our borders. The borders have to be secure."

Leading the charge, two border state senators -- Arizona's Sens. Kyrsten Sinema and Mark Kelly -- sent a letter to the President last week, arguing that Title 42 needed to remain in place until the administration had demonstrated a clear plan to manage the number of migrants that would come across the border.

"Given the impacts that changes to Title 42 could have on border communities, border security and migrants, we urge your administration not to make any changes to title 42 implementation until you are completely ready to execute and coordinate a comprehensive plan that ensures a secure, orderly and humane process at the border," they wrote.

The end of the Trump-era pandemic restrictions would mean a return to traditional protocols, which might include releasing migrants into the US while they go through their immigration proceedings, detaining migrants, or removing them if they don't have an asylum claim.

The Department of Homeland Security has been actively planning for a potential surge of migrants when pandemic restrictions lift, DHS officials told reporters this week, including increasing capacity on the border, lining up contracts for transportation, and deploying hundreds of personnel to assist.

Kelly doubled down Thursday, telling CNN he still hadn't seen enough evidence the administration had put a plan together.

"We need to make sure we don't line up a situation that is unmanageable," said Kelly, who's facing a competitive reelection this year.

Republicans have already signaled they'll make a repeal of Title 42 a cornerstone of their midterm campaign strategy especially if the numbers at the border surge and images of packed facilities and an unmitigated crises play out in the media. This week, the GOP conference circulated a series of talking points to their members on how to attack the administration's history on immigration.

"I think everybody is justifiably freaked out about what's going to happen at the border. Right now, Title 42 is holding back about 50% of the global flow. So if you take that away, and you have 50% more people coming in on a daily basis ... how are they going to manage that? They have no idea," Sen. John Thune, the GOP whip, told CNN. "I think it's crazy. Crazy politically too."

Kelly is staring down his own reelection in a state where immigration policy is front and center in a statewide campaign.

But, it's not just border state Democrats who are carefully navigating the administration's actions on Title 42.

"I'm not happy about it," Rep. Elissa Slotkin, a Democrat from Michigan said. "We have no follow-on plan. We are sort of planning to be overwhelmed at the border."

Slotkin said when she saw reports on plans to rescind Title 42, she swiftly put in a call to administration officials to figure out what the plan was going to be to ensure there wasn't a surge.

Sen. Maggie Hassan, a Democrat from New Hampshire up for reelection, tweeted Wednesday she too was worried the administration hadn't put in place an effective plan yet that would enable them to successfully repeal Title 42 without severe repercussions at the border.

"I am concerned that there is not a sufficient plan in place to address the steep increase in border crossings that could result from this reported decision," Hassan said. "This preemptive repeal threatens border security at a time when the administration should be focused on strengthening it."

Other Democratic senators facing elections in November declined to comment. Sen. Raphael Warnock of Georgia told CNN he had no comment on reported plans to repeal Title 42.

One moderate Democrat, who asked not to be named so they could freely discuss how the decision could affect the midterms, put it simply.

"I think it's gonna be a problem," the member said. "If there is a huge surge and mainstream (news) covers it, it's a problem. It fits into the whole gestalt of how we are soft."