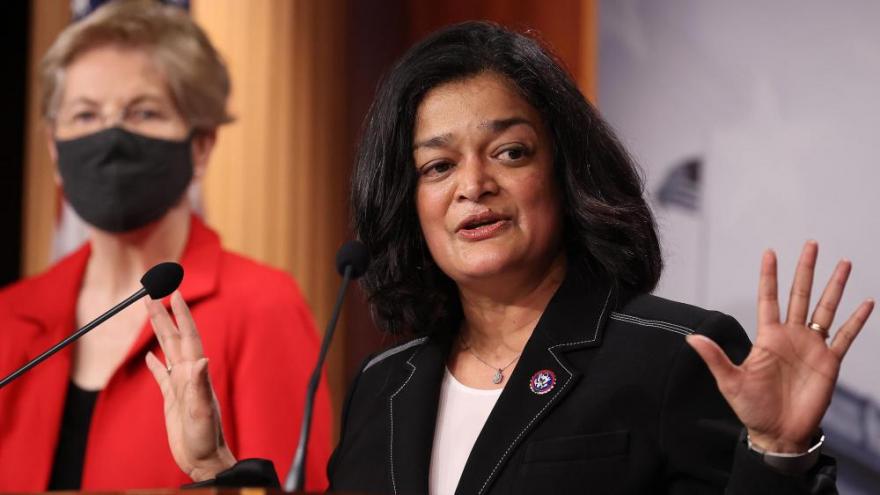 Rep. Pramila Jayapal (D-WA) speaks during a news conference with Sen. Elizabeth Warren (D-MA) to announce legislation that would tax the net worth of America's wealthiest individuals at the U.S. Capitol on March 1 in Washington, DC.

The vote is set to come as Pelosi works to unite disparate wings of the Democratic Party on both the infrastructure bill and broader $3.5 trillion social and environmental package, all as Congress works to stave off a lapse in government funding by Thursday and hitting the debt limit in October. Pelosi, along with Senate Majority Leader Chuck Schumer and senior White House officials, spent the weekend working to broker an agreement on the social and environmental package.

So far they have been unable to strike a deal between progressive and moderate Democrats on a topline figure for the social and environmental bill or a framework of programs contained in the plan. Pelosi had committed last month to the original Monday deadline for the infrastructure bill, hoping to placate moderates who were wavering in support for the larger budget blueprint.

Biden spoke with lawmakers over the weekend on the path forward for his economic agenda, according to a White House official. Upon arrival at the White House on Sunday from Camp David, the President expressed optimism about negotiations but acknowledged, "It's going to take the better part of the week I think." On Friday, Biden had said the talks were at a "stalemate."

"Building on the progress from last week following White House meetings and the announcement of options for revenue that come from ending failed special giveaways to the wealthy and big corporations, the President spoke with members about the path forward, as did White House senior staff, the Legislative Affairs team, and Cabinet members," a White House official said. "There was also extensive work on the staff level."

"Engagement is happening through the weekend into Monday," the official said, arguing, "It continues to be clear that there is strong resolve across the caucuses behind passing these bills so that our economy delivers for the middle class and not just those at the top."

Democratic Rep. Pramila Jayapal, the leader of House progressives, said on CNN's "State of the Union" there simply aren't enough votes for the party to pass the infrastructure bill right now.

And Pelosi acknowledged earlier Sunday she wouldn't bring the measure for a vote knowing it would fail.

"We'll bring the bill forward tomorrow for consideration, but, you know, I'm never bringing a bill to the floor that doesn't have the votes," Pelosi said on ABC's "This Week."

House progressives have said they will not vote for the separate infrastructure package unless it is accompanied by the much larger social bill, dubbed by the administration as the "Build Back Better" plan.

But some moderates have balked at the current $3.5 trillion size of that plan, leaving to feverish negotiations in search of a middle ground. With the thinnest of margins in both chambers, Democrats can afford to lose almost no party votes.

"The speaker is an incredibly good vote counter, and she knows exactly where her caucus stands and we've been really clear on that," Jayapal told CNN's Jake Tapper when asked about the planned vote on Monday. "The votes aren't there. I don't think she's going to bring it up."

Jayapal, the chairwoman of the Congressional Progressive Caucus, has said for days that her members will not vote for the $1 trillion bill without passing the $3.5 trillion package aimed at enacting Biden's economic agenda. But her comments Sunday are the clearest sign yet that progressive House members intend to carry through on their threat hours before the planned vote.

Gottheimer, who co-chairs the Problem Solvers Caucus, told Tapper that the House would bring the infrastructure bill to the floor for consideration by Monday's deadline, but that a vote won't take place until Tuesday at the earliest.

"The way these things work if you start debating it and it rolls over to Tuesday, I don't think — I think we're all reasonable people," Gottheimer said.

Pelosi had also suggested the Monday deadline was slipping before formally pushing it.

"Let me just say we're going to pass the bill this week," she said.

None of the Democrats offered much clarity on the broader negotiations over the larger social safety net plan, which would make major new investments in child care, health care, education and climate change.

Pelosi said it was "self-evident" the final bill would be smaller than $3.5 trillion.

"Obviously with negotiations there will have to be some changes in that, and the sooner the better," she said. "We will do that. The American people need that to happen."

This story and headline have been updated with additional developments Sunday.