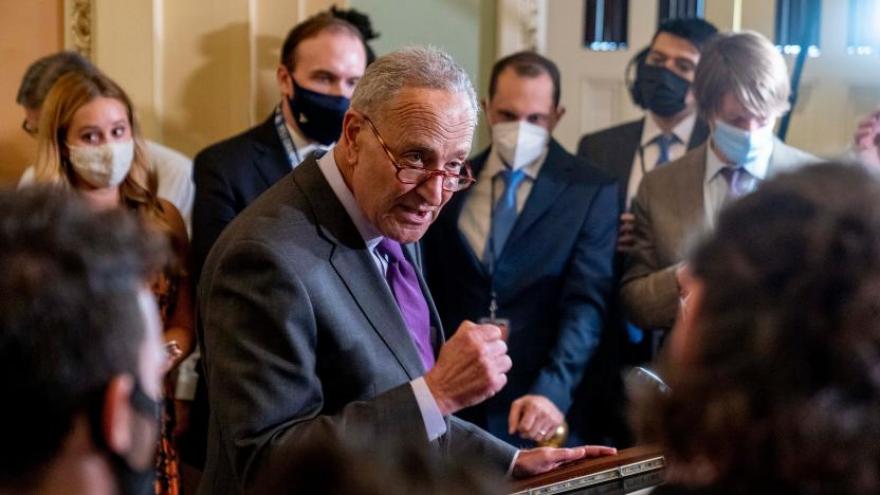 President Joe Biden said it's "a real possibility" that Democrats would establish a carveout of the filibuster rules to let the debt ceiling be increased by a simple majority vote. Senate Majority Leader Chuck Schumer is shown here speaking to reporters at the Capitol, in Washington, Tuesday, Sept. 14, 2021.

(CNN) -- The country is on the precipice of a financial calamity and Democrats are on the verge of potentially altering the contours of the Senate with a potential one-time rules change that would enable them to pass a debt ceiling increase well ahead of the October 18 deadline.

It's a strategy that Democratic leaders have been socializing since last week in the caucus, but the idea got a serious boost on Tuesday night when President Joe Biden said it's "a real possibility" that Democrats would establish a carveout of the filibuster rules to let the debt ceiling be increased by a simple majority vote.

Bottom line: We are heading into uncharted territory after this vote Wednesday, but Democrats are going to have to start making some decisions. Republicans aren't blinking. Democrats are making it clear they won't cave and use reconciliation. If both parties hold firm to those promises, the options going forward? They're obscure and narrow.

The procedural vote Wednesday afternoon on the debt ceiling. The expectation is that it will fail. Republicans will block it, but the hours after that vote is when things will really kick into gear.

During the 2011 debt crisis, Congress ultimately acted. But even after they passed an increase, the US credit rating was downgraded. The potential danger here doesn't just start on October 18 and members and aides are keenly aware they are quickly entering the danger zone.

"The United States is already on the threshold of a downgrade of its debt," said Sen. Elizabeth Warren, a Democrat from Massachusetts. "We don't have time to mess around any longer."

The options (from most likely to least likely at this point):

Democrats change the rules: This option is the most serious right now. CNN learned early on Tuesday that it was on the table, that it came up during a private lunch last week and was the subject of conversation Tuesday. This is essentially a carveout of the filibuster for the debt limit. Leadership's rationale here is that they don't need Republicans to raise the debt ceiling through reconciliation.

So, why do they need 60 votes to do this any other way? Some Democrats are arguing this wouldn't be akin to going nuclear or blowing up the filibuster on legislation, but you can imagine how it will be perceived by Republicans as a slippery slope. The ability to use this tool, however, is only possible if every single Democrat agrees to do it. Moderate Democratic Sen. Joe Manchin of West Virginia threw cold water on this Monday. Tuesday he said he was not going to talk about it and it was up to leadership to work out a deal. We'll see if anything changes.

Fellow moderate Democratic Sen. Kyrsten Sinema of Arizona has expressed deep concerns about changing the legislative filibuster too, but let's keep an eye on these two because this is a more narrow change.

Democrats cave and do reconciliation: For weeks, this seemed like the most obvious option, but time is really beginning to run out for this. The process is lengthy and complicated. It requires Democrats to say exactly how much they are raising the debt by and Majority Leader Chuck Schumer has been leading his caucus in saying he's not going there.

The process would require Democrats to pass a budget, put it on the floor, debate it for 15 hours, engage in a marathon vote series known as a vote-a-rama, have the Finance Committee write the debt ceiling increase, send it back to the floor for 20 more hours of debate, have another vote-a-rama and then finish it up. It's a lot, and you can understand why Democrats want to avoid it. But it's an option and up until Tuesday, it was perceived as maybe the most likely one.

Republicans relent: This is what Democrats hope. They bring House-passed debt ceiling bill to the floor. No Republican forces a 60-vote threshold and Democrats vote to increase the debt ceiling with a simple majority. But, it's not happening Wednesday. It won't happen Thursday, and no, it isn't happening next week, either.

Even if GOP leaders got to a point where they'd let this slide, Roy Blunt, a Republican leader from Missouri, summed it up pretty well: "we really wouldn't have the ability to control all 50 of our members on this issue."

See: Sens. Ron Johnson of Wisconsin, Ted Cruz of Texas, Josh Hawley of Missouri and Bill Hagerty of Tennessee (who have been unafraid in the past to hold things up).

Biden does this using the 14th Amendment: There is no evidence that the White House is seriously entertaining this idea, but Senate Democrats have discussed it privately. Within the 14th Amendment, there is a public debt clause that says the "validity of the public debt of the United States, authorized by law, including debt incurred for payment of pensions and bounties for services in suppressing insurrection or rebellion, shall not be questioned." Some read this to mean that the President can just keep paying the country's debts. The potential problem with taking this route is that it would likely end up in court. It's completely untested for this use, which is why it's not really on the table right now.

Back to the filibuster change

The opposition to overhauling the legislative filibuster has been steadfast, and it's been bigger than just Sinema and Manchin. But Democratic leaders' argument that this is a one-time change just for the debt ceiling is sinking in. Democratic Sen. Jeanne Shaheen of New Hampshire, who has never been supportive of getting rid of the legislative filibuster, told CNN on Tuesday night that all options have to be on the table for the debt ceiling.

"I'm open to anything that is going to deal with the debt ceiling," she said when I asked her specifically about the filibuster carveout.

Why is this different?

For a lot of moderate Democrats, protecting the sanctity of the filibuster on legislation has always been about both the Senate as an institution and about the country's national progress from Congress to Congress. If you nuke the legislative filibuster, you would have wild swings in the country's policies potentially every two years. As has been made clear by several Democratic aides over the last 24 hours, many Democrats view this debt ceiling carveout as separate from going nuclear on the legislative filibuster. They argue that if Republicans used this strategy in two years to raise the debt ceiling on their own, it wouldn't contribute to any radical swings in policy.

There is no guarantee, however, that if Democrats go down this road, Republicans won't chip away further at the filibuster. Look what happened with judges. Then-Senate Majority Leader Harry Reid took the first step to lower the threshold from 60 votes to 51 on most nominees. But the 60-vote threshold for Supreme Court picks was maintained. In 2017, then-Senate Majority Leader Mitch McConnell and the Republicans lowered to vote threshold on Supreme Court nominees to 51. If this effort is used for the debt ceiling, it could have much further-reaching implications down the road.