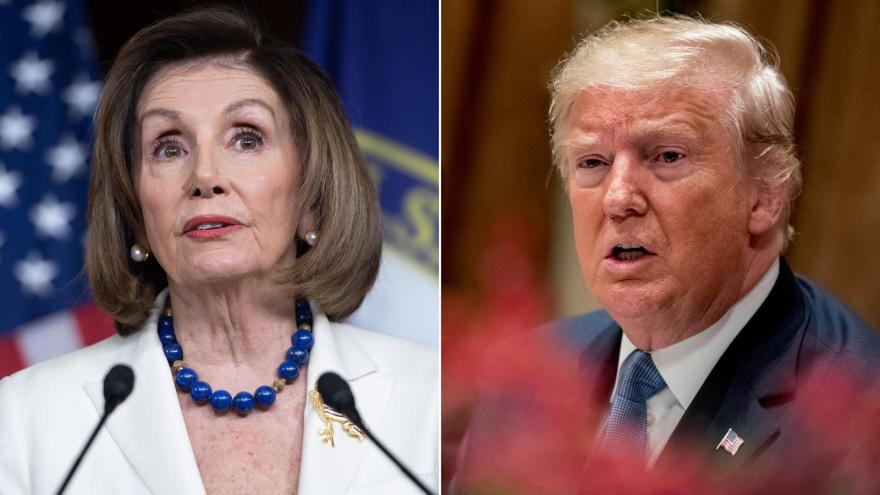 House Democrats and the Trump administration are on the brink of a deal to advance President Donald Trump's revised North American Free Trade Agreement after months of secretive negotiations, according to sources close to the talks.

(CNN) -- House Democrats say a deal to advance President Donald Trump's revised North American Free Trade Agreement is likely to be announced on Tuesday, after months of secretive negotiations between lawmakers and the White House over the pact.

"I think that there's going to be an announcement tomorrow," Oregon Democratic Rep. Earl Blumenauer told reporters Monday evening after a meeting with key lawmakers and House Speaker Nancy Pelosi to discuss the agreement. "I'm very optimistic based on what I've been a part of and what I've seen and what I hear."

US Trade Representative Robert Lighthizer is traveling to Mexico City alongside Jared Kushner for an event with Mexican and Canadian officials on Tuesday. A source familiar with the talks told CNN that Lighthizer plans to sign an updated version of the trade agreement. Politico was first to report that signing the deal is the purpose of Lighthizer's trip to the Mexican capital.

House Ways and Means Committee Chairman Richard Neal said Monday that he is "delighted" with the deal, even as lawmakers await final legislative text. Asked if it would be fair to say a handshake agreement exists between Democrats and the White House, Neal responded, "I think it's fair to say we're doing great."

"By any objective standard this is substantially improved. We've constructed, I believe, a template for the future," Neal said, also telling reporters he would like to see the deal on paper this week.

House Democratic leaders have said they would like to hold a vote on the trade deal by the end of the year, requiring an expedited timeline in an already tight calendar for the next two weeks.

A vote in such a short time frame would require a significantly quickened process rather than following the longer calendar laid out by Trade Promotion Authority, the law that details how such trade deals should be considered in Congress. Neal suggested his committee may not hold a mark-up hearing on the pact, saying that because the rebranded US-Mexico-Canada Agreement is a renewal of an already-existing trade deal, a hearing may not be necessary.

House Majority Leader Steny Hoyer told reporters last week that lawmakers from both sides of the aisle are likely to accept a speedy process because of bipartisan eagerness to get the deal done this year.

If ratified, the trade deal would represent Trump's primary legislative victory since Democrats took control of the House of Representatives last November. The pact is also viewed as essential by a number of Democratic freshmen from more conservative districts, who not only support the deal on its substance but also believe a bipartisan achievement will play well on the campaign trail.

Key to the push is winning over organized labor -- AFL-CIO President Richard Trumka spoke to Trump on the phone about the deal on Monday morning, a person familiar with the matter said. Neal would not say how Trumka landed on the proposal, but he expressed optimism about negotiated enforcement and labor standards, as did Connecticut Democratic Rep. Rosa DeLauro, a staunch organized labor advocate and member of the USMCA working group.

The nine-member working group of House Democrats for months has met with Lighthizer behind closed doors to seek changes related to pharmaceuticals, environmental and labor protections, and enforcement provisions in the trade deal. More recently, Pelosi signaled her desire to strip key legal protections for tech companies from the deal. It is unclear what made the cut: members on Monday were quiet about the details that have been pinned down.

Democratic leaders have been under increased pressure from members of their own caucus, especially from frontline freshmen members who view the pact as a central achievement to tout back home in their districts. In public letters and private conversations, the lawmakers have made clear they want to move on the trade deal before year's end, despite some objections to the structure of the agreement from more liberal members of the party.

But the group has faced increased, and explicitly targeted, pressure from the Trump administration in recent months, making passage a piece of key evidence of pushback to the administration's argument the House impeachment inquiry has superseded all other legislative business.