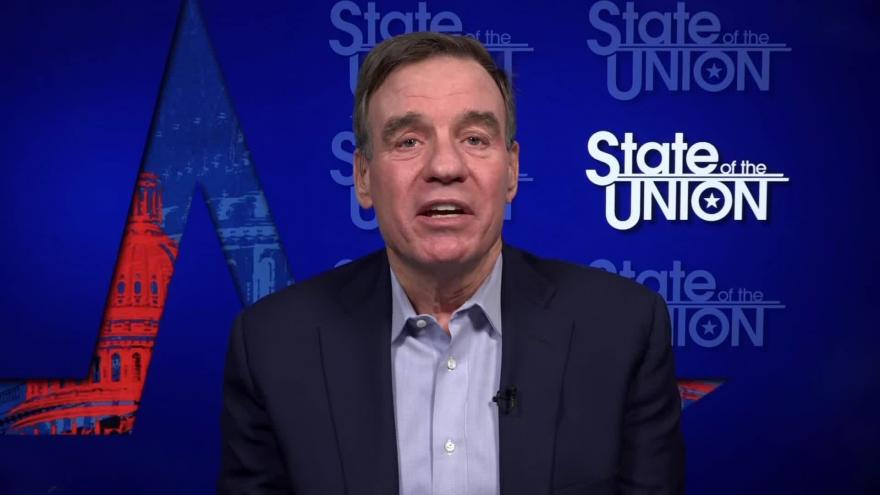 Democratic Sen. Mark Warner of Virginia said that a proposal for another coronavirus stimulus package could come as early as Monday.

(CNN) -- A bipartisan group of senators on Sunday appeared optimistic that lawmakers would put forward a proposal for another coronavirus stimulus package, saying details about the piece of legislation would likely come early this week.

Democratic Sen. Mark Warner of Virginia, who is part of a bipartisan group of senators hashing out a compromise on a stimulus bill, told CNN's Jake Tapper on "State of the Union" that they are close to an agreement and that it could come as early as Monday.

"I think we have got the top line numbers done. We are working right now on language so that we can have -- as early as tomorrow -- a piece of legislation," he said.

Warner said it will be a four-month emergency relief package with a $908 billion price tag. It remains uncertain whether Congress will vote on such a package as Republican and Democratic leadership negotiate how much of a stimulus plan to include in a separate, massive funding bill to keep the government open.

The Covid relief proposal, Warner said, "will give targeted relief for the unemployed; for people in food insecurity; rental assistance; small businesses that have run out of their (Paycheck Protection Program) funds and additional funds to those minority businesses that have been extraordinarily hit hard."

"We put additional assistance in finally for broadband, which we all know is an academic necessity and additional dollars around the vaccine distribution; assistance for hospitals."

And despite the fact that neither Republicans nor Democrats are getting everything they would like in the bill, Warner told Tapper he has "pretty high assurance" there will be enough votes to support passage of the measure.

Republican Sen. Bill Cassidy of Louisiana also weighed in Sunday on a timeline for the legislation, telling Fox News that its final language will "probably come out early this week -- earlier this week."

Meanwhile, Sen. Joe Manchin explained Sunday that the group of lawmakers came together after the election to figure out a path forward on the package and stressed that a deal should come forward this week.

"Well it's a deal that must come together. We don't have a choice now. It's one of those things that has to be done," Manchin, a West Virginia Democrat, told NBC.

Lawmakers have been working in recent days to figure out a new stimulus package as Senate Majority Leader Mitch McConnell has made it clear that he'd like to see a proposal Monday, though talks moved slowly this weekend over the package and the spending bill to keep the government open before funding runs out December 11, according to two sources familiar with the matter.

Multiple issues still divide the two parties, but sources said two big matters remain unresolved on a relief package: liability protections for businesses, workers and others that Republicans want, and funding for state and local governments that Democrats are demanding.

Aides familiar with the process previously told CNN that members are working around the clock and have broken into teams to hammer out specific sections of the bill.

So far the stimulus proposal includes $300 a week in enhanced federal unemployment benefits, a continued pause on student loan payments, an eviction moratorium, another round of the PPP, $16 billion for vaccine development and distribution as well as coronavirus testing and tracing, among other relief measures.